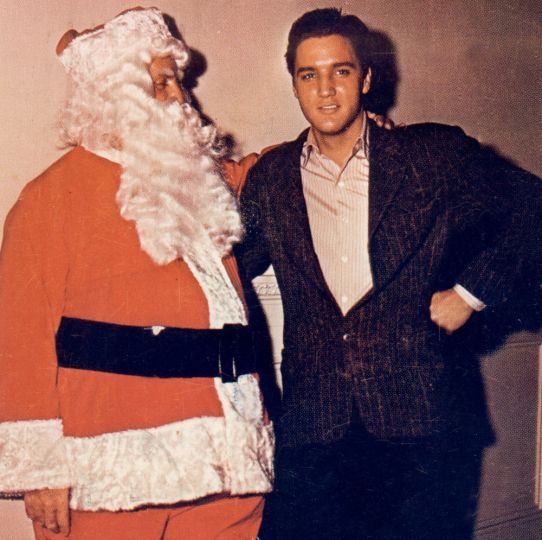 With music from Elvis Presley, Augie Rios, Sufjan Stevens, WHAM, and The Decemberists

Justin Barney: This is “Five Songs We Can’t Stop Listening To” and we’re in holiday season.

Justin Barney: So I’m talking to all of our DJs to talk about their favorite holiday songs this week and we should start with our morning host Dori.

So Dori, what’s one of your favorite holiday songs?

Dori Zori: It’s not a Christmas disco song, although if you have some you should send them to me because I will listen to those all day. It’s like a sad song, and I’m not like a sad song person-

Justin Barney: I am!

Dori Zori: I know so you probably will dig this. I also think you like Elvis Presley, it’s “Blue Christmas.”

Justin Barney: Totally one of my favorites.

Dori Zori: A lot of people recorded this song, even Bon Jovi I think did a cover of it, but no one did it quite like Elvis. The fact that it’s a sad song, but also sung by Elvis who is one of my favorites thanks to my grandma watching Elvis movies with me when I’d come home from kindergarten. My love of Elvis grew, and so this holiday song is one of my favorites, and I’ve got a little Christmas ornament she gave me that I could press a button and it plays “Blue Christmas”, and it just isn’t the holidays until I hang that on the tree and press the button like twelve times.

Justin Barney: I feel that. Can you sing one line?

Justin Barney: This is “5 Songs We Can’t Stop Listening To” and we are in the holiday season so I’m asking all the DJs about their favorite holiday songs.

Marcus Doucette, do you have a favorite or one that you enjoy?

Marcus Doucette: No I hate them all. No, I don’t know, Christmas is one of those things that’s easy to like and easy to hate.

Marcus Doucette: I like Christmas don’t get me wrong. I like buying presents and I like getting presents, but when it comes to the music it’s really easy to be inundated with all the songs that you’re already familiar with. That can be really sonically tiring for me so when I get down with some Christmas jams, it has got to be something a little different.

When I was looking at my collection of Christmas music, I was like “You know what I actually do like a bunch of Christmas songs, but they’re all weird. Though I’d have to say the one that I’ve been feeling for the past few years and whenever it comes on I just like it, is this novelty Christmas hit from I think the late 50’s or 60’s by this cat Augie Rios and it’s called “¿Dónde Está Santa Claus?”

It has got everything. He’s a kid so it’s just cute, but also he’s doing it in Spanish throwing around stuff like “Mamacita” and it’s got that real authentic sort of Christmas vibe and even though it’s Latin and I’m not necessarily a Spanish speaker I’d get down with that song any day of the week, or any day of the week right around Christmas. Let’s be honest.

Ken Sumka picks “That Was the Worst Christmas Ever!” by Sufjan Stevens

Justin Barney: This is “5 Songs We Can’t Stop Listening To” and we are at a time of the year where it’s finally appropriate to play holiday music, so I’m asking some of our DJs about their favorite holiday songs.

Ken, do you have a favorite or one that’s up there?

Ken Sumka: I have a bunch, and there’s actually three holiday songs that I keep on my iPod year-round.

Ken Sumka: And this is one of them-

Justin Barney: So it comes on in July and you don’t skip it?

Ken Sumka: It’s that good. It’s “That Was the Worst Christmas Ever!” by Sufjan Stevens.

Justin Barney: One of the best.

Ken Sumka: My love of Sufjan Stevens is pretty well documented around here. I mean for Pete’s sake the guy put an album out about Illinois with the biggest hit being a song called “Chicago.”

Ken Sumka: Anyway this song “That Was the Worst Christmas Ever!” is typical Sufjan. It’s him, a banjo, a guitar, it’s pretty Spartan instrumentation, but it’s just a gorgeous song. At one point in the song, presents are thrown in the fire, and it’s not a particularly happy song but Christmas songs don’t have to be happy, and this song is so quintessentially Sufjan both in his whisper of a voice and the instrumentation , and it came from a five-C.D. Christmas box set. This guy goes large.

Justin Barney: I remember buying that in high school, and being like “There’s five discs in here, there are stickers, there’s an essay…” It was like in this one little box set you got this entire package.

Ken Sumka: And that’s the thing. I’ve always said Sufjan Stevens is kind of like the Max Fischer of music, where he just goes full hog into everything he does, and that’s what I love about him. He’s a brilliant musician and songwriter, but he’s just so ambitious with what he does. This is a Christmas collection of five discs, two thirds of which are songs he wrote. I mean there’s some traditional stuff but most of it is stuff that he wrote.

Justin Barney: This is “5 Songs We Can’t Stop Listening To” and we’re in the holiday season so I’m talking to our DJ’s about their favorite holiday songs.

Nate, do you have a favorite?

Nate Imig: I do. I just love this song for a lot of reasons but I think the most important is because it’s kind of symbolic. It’s Wham!, “Last Christmas” and you know it’s been just about a year since George Michael passed away and in fact it was Christmas last year when he was found dead by his partner.

Nate Imig: Yeah and so there’s actually this campaign this year to make this song number one as a tribute to the late George Michael.

Nate Imig: No this is like a global thing. People around the world are purchasing this song in an effort to make it number one.

Nate Imig: So I just made the purchase, and I just love this song. In fact I was first introduced to this song after closing at a bar that I worked at and my gay manager turned it on and we had a little bonding moment. He was like, “Let me play you some real Christmas music.”

Nate Imig: Well first off if you watch the video, it’s just like the perfect 80’s music video.

Nate Imig: It’s like this destination skiing scene, but it’s a fun song. It’s danceable, and it’s a little sad. I think everybody knows what that’s like to care about somebody, and then for them to just disappear.

I think being that George Michael was an openly gay artist by the end of his career that’s special that everybody has felt that. Gay, straight, or whatever else, you know just kind of giving your heart away to somebody and they give it away.

Justin Barney: There you go. Let’s make it number one.

Justin Barney: All this week I have been talking to our DJs about their favorite holiday songs, so I would like to share one of mine, “Please Daddy (Don’t Get Drunk this Christmas” by The Decemberists.

The Decemberists have long been one of my favorite band, and lead singer Colin Meloy and his wife Carson Ellis write books together. I read all of their books and recently they released a new one called, “The Wiz Mob and the Grenadine Kid.” Whenever I read their books I end up going on a bit of a Decemberists kick, so this is a holiday song that has been popping up for me.