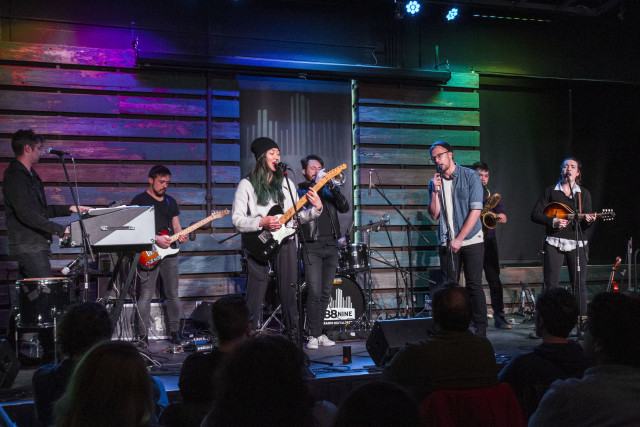 Every week we usually talk to one or two artists about their favorite songs. This week we’re letting the artists take over all 5 Songs.

Here, Jack Garratt, Best Coast, Esperanza Spalding, San Fermin and Milo talk about songs they love and why they love them.

Jack Garratt: I was driving into Chicago yesterday and I put on Acid Rap by Chance the Rapper. Even though I listened to the whole record, the only thing I had in my head was “Good Ass Intro” because it is one of the greatest intros to any record I’ve ever heard, and it’s just a beautiful piece of music.

Justin: What makes “Good Ass Intro” better than other intros?

Jack: I mean, kind cause it’s exactly what it says on the tin. It’s a good ass intro. But also, it’s aware of itself. It’s a bit tongue and cheek. It’s confident and it points almost a little arrogant because it’s just funny and it laughs at itself. But it’s fun. That’s the great thing. It’s fun music. It’s good, it’s well-written, and it’s got good intention. And it really speaks for itself. It’s got absolute truth in it. And it’s not fun in the sense that it’s like cheap or it’s been bastardized.

Justin: For sure. And that’s totally what that album is for me. That’s always what I’m trying to explain to people. The guy is just living it. You know, he’s not trying to do anything.

Jack: The dude’s got being in the moment as a studio recording down.

Justin Barney: Hey Bethany, what is one song you can’t stop listening to?

Bethany Cosentino: I got really into this band called Widowspeak that I had heard of before, but I had never really listened to them. I bought their record and there is a song on the record called “Stoned.” It’s a really really amazing song. Lyrically I think it’s really cool because it’s bout being high and about being stoned, but they talk about it in a way where it’s in a similar way that I felt I wrote “California Nights.”

I was sort of talking about getting high as in like an out-of-body experience, not necessarily like, “whoa man, I’m totally stoned on weed.” It talks about life and these feelings that love can give you, and friendships, and all this stuff in life that can make you feel high in itself without actually taking drugs.

Esperanza Spalding has won four Grammy Awards and her new album, “Emily’s D+Evolution” is out now.

Justin: I love that you picked that song. Why that song?

Esperanza: Style. I don’t think that anyone has MF Doom’s style at all. Nobody has his style. Not even close, because it’s so individual, you know? Just like everybody who has quote, unquote “Style.” And what I love, I mean, I can’t say mostly, but what I really love about his work in particular is the unfettered individuality. You know, you really feel like we’re having an experience with another human, just as he is. It feels really honest and really direct. That’s how I hear it, that’s what he meant, and there’s not a lot of fluff around it. I mean, I just think that everyone is their own style, really, if you spend the time to honor the totality of their particular body of work. He feels like a liberated artist. The way that he creates his poetry is something to strive for, you know?

Ellis Ludwig-Leone: There’s a song by Sam Amidon called Wedding Dress. He actually just toured with us on our tour of the East coast and it’s just a gorgeous song and it has really great arrangement by Nico Muhly. Every time he would perform it live I always just had the feeling like, “Maybe it would be kind of cool to get married,” which is such a crazy thought that I would never have. He’s just such a great performer you know?

Justin: What about it made you want to get married?

Ellis: There’s something very pure about the sentiment and I think it’s just about a women who is sewing a wedding dress. But there’s something really just focused and beautiful about the one image of this women and the arrangement has this sort of different feeling to it all together. It almost feels disconnected from the song in an interesting way.

Ellis: It sounds like an octopus is getting married.  [laughs]

I caught up with Milo. Rolling Stone recently named his most recent album “So the Flies Don’t Come” one of the 40 best hip-hop albums of 2015.

Justin Barney: Milo thank you for being here, what is one song you cannot stop listening to?

Milo: I heard it for the first time in Oakland when I was cooking breakfast. And like it was really foggy and beautiful. The way that her vocal is on that song is pristine. Then, later I heard it was a freestyle and I was like, “oh my gosh the energy explains everything”. The energy on it is purely uninterrupted. It’s an excellent song.

Justin: What about her vocal delivery is different?

Milo: I am extremely monotone style kind of guy.

Justin: And I love that. I’ve talked about that on air before.

Milo: Oh dope thank you. Yeah like I love guru and rappers like that. She just peels it back a little bit. It’s not so much like whip my hair. It’s just her really like hitting that beautiful just intense personal energy like it feels very confessional but like what she’s saying is actually kind of pointed like very you know, I don’t care, its whatever,  this is me.