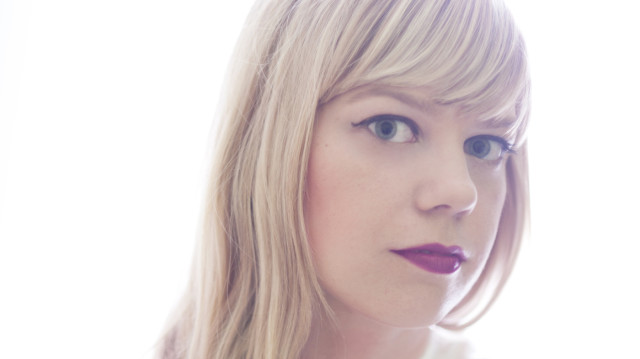 Every week we ask an artist that we love to come on the show and talk about a song that they love. This week we caught up with Canadian singer/songwriter Basia Bulat, who came to Radio Milwaukee for a Studio:Milwaukee session before her show at Colectivo.

Justin Barney: I hope that I’m remembering this correctly. If I’m not, this will be very embarrassing for me. But you were in Milwaukee for Tallest Man on Earth. And I believe that you performed one of the most heart-wrenching and beautiful covers of Leonard Cohen’s “Ain’t No Cure For Love”.

Basia Bulat: Yeah, I love that song a lot.

Justin: I just want to talk about this song. So why of all the Leonard Cohen songs to cover, to do “Ain’t No Cure For Love”?

Justin: Yeah. What about the lyrics in that song do you like?

Basia: Well, there’s a lot in there. I think just getting through to the end of the story when he says “I don’t need to be forgiven for loving you so much.” I think that when you get to that part in the song, at least for me, there’s just something in my whole body that kind of resonates with that.

Justin: I totally agree. That is like Leonard Cohen’s take on love. I think that most singers are like looking for love, or want to prove that they have love and they want to be like “I have so much love to give and I’m loving you so much,” and for him it’s like a curse that he has so much love. He’s like “I don’t want to love this much. It’s a burden on me. It hurts me. It’s the relationships that I’m in. It causes me pain. I wish that I didn’t love so much.” And I think that’s why I love that song. Like everybody in the world is looking for the cure to love. It’d be so much easier without it. You know, the holy books are open wide, the doctors are working day and night, but they can never find the cure.

Basia: I think he explores this joined pain that comes with love and the realization, I suppose, that both sides are always there.

Sometimes I think, ‘What is the point of making music? What are we trying to accomplish here?’ And this is the subject of many arguments and discussions of which there is no right answer. But I tend to think music (and art) help us understand each other. As individual people and, in turn, as part of a larger culture.

That is probably why I am so drawn to Mitski. Through her music she wants us to understand her, as an individual.  And she is trying to figure out how she fits into a larger culture. Here she sings about fitting into a very American person’s life while having been raised as part of a different culture. She sings of the difficulty and conflicts inherent under two different mindsets.

And I believe this is how we breakthrough as a culture and how we are really able to change. By hearing others, by understanding them, and listening with open ears.

Something is going to happen to you when you hear this song. When the hook kicks in, your face is going to contort into an involuntary reaction that we in the office call “The Stanky Face.”

You’re going to move your head from side to side, bobbing it to the beat. It’s just going to happen, I’m telling you. It’s The Stanky Face.

Justin Barney: I’m here with our own Nate Imig. Nate. What’s one song you can’t stop listening to?

Nate Imig: I don’t know if you know… Do you have this in your life where you’ve lived with a person for a long time?

Justin: No. My parents? [laughs]

Nate: Well you get to know, the longer you’ve lived with somebody, you get to know the top five or six songs they listen to while they do things around the house. So in my case, my boyfriend Jeff and I listen to this playlist of 10 or 15 songs over and over and over again, and I was doing something, like, the least hot that I could think of. I was mopping the floor in my kitchen and he put on this song and it just worked. It was strange. Because the song is called “Hot” by Powers and it worked great. So listen to it while you’re mopping or working out or hanging at the club.

This week we asked Milo of Ra Ra Riot to tell us about one song he can’t stop listening to.

Milo: Well it is sort of a new one for me as of this morning.

Milo: But Rostam’s new single, “Gravity Don’t Pull Me,” is kind of amazing, not kind of, it is amazing. Yeah, I’ve had it on repeat basically since it’s been released. He’s an amazing artist and producer and really inspiring and it’s exciting to see him branch out and continuing to do his soul in music and put out one good song after another.

Justin: That is awesome. I like that you just found this this morning.

Milo: Yeah, had we had this conversation yesterday probably about a different song in mind and it kind of blew me away when I heard it and I saw the video.

Justin: So since it is so fresh and new to you, what is that thing, so it’s like when you first catch on to a song there has got to be that first thing that grabs you.

Milo: Yeah, it’s sort of the production on it is incredible and subtle and focused and it just surprises you and I think it takes you somewhere you don’t expect to go.