5 Songs We Can’t Stop Listening To with Leon Bridges

5 Songs We Can’t Stop Listening To with Leon Bridges 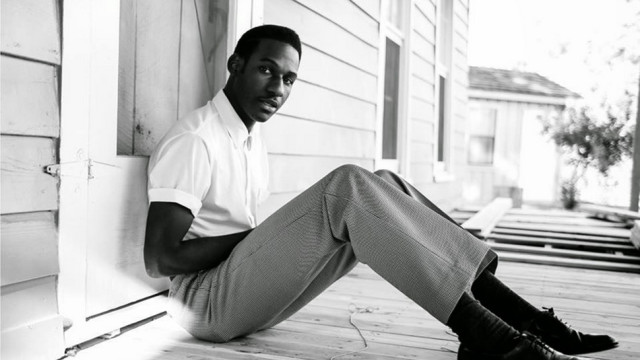 1. Leon Bridges picks “U Got It Bad” by Usher

Every week we have a guest come on and talk about one song he or she loves. This week our guest is Leon Bridges.

Justin Barney: All right, freshman year of high-school, what are you listening to? Or, 8th grade?

Justin: What was your song off that album?

Justin: Yeesss! I remember buying this album on CD when it came out.

Leon: Yeah, my daddy, he bought that for me for Christmas and, it’s so funny, I had to hide that record from my mother ’cause she would have killed me if she knew I was listening to that. Yeah, but that’s a good record. I never really had records like that. I just listened to the radio. So that was my first album.

Listen to our full interview with Leon Bridges, in which he talks about lying about his virginity in high-school, not feeling “black enough” growing up, and what it was like to meet President Obama.

Aesop Rock is Ian Matthias Bavitz, from Long Island, New York. His song “None Shall Pass” has more than 6 million plays on YouTube alone. He’s collaborated with rap heroes. He’s signed to Rhymesayers Records. The man is a professional artist. On his IRS forms he writes “artist” and if the government were to audit him, the claim would check out.

It’s the dream of every kid writing bars in margins of loose leaf papers and rapping their own lines over YouTube clips of their favorite songs. Aesop has done it.

And yet, in this song, Aesop Rock describes himself as a failure. He says, “I used to draw.” Emphasis on the used to. You see, when Aesop was still signing his name as Ian Bavitz, he wanted to be a different kind of professional artist. Micron pens and accent lines instead of bass lines and microphones. He earned a degree in Visual Arts at Boston University, but he’s moved that dream aside to become a successful musician.

And he feels like he’s lost it. Lost that part of him. But I gotta say, when you listen to this song, it’s there. Through his words he is still making visual art.

This song is going to sound like a joke. But I assure you it’s not. This song is the Internet come to life. A reference to Harry Belafonte’s “Day-O” and the theme song form the ’90s children’s TV show “Bananas in Pyjamas.” It’s like Thomas Mudrick just Googled the worlds “banana” and “song” and clicked “I’m feeling lucky,” but somehow it works. In a very weird way, this song is perfect. Its beat is infectious, its wordplay satisfying how it comes off the tongue. By the end of this song you will be singing “Slip on a banana peeeeel, slip on a banana peeeeel” and if you are listening with kids I guarantee they will be, too.

This is by far the weirdest thing I have played on this program, but I’m going to slip on a banana peel and do what I feel.

Justin Barney: I’m here with our own digital strategy consultant and all around good dude, Glenn Kleiman. Glenn, what is one song that you can’t stop listening to?

Glenn: I love Gregory Porter. I’ve been following him for several years. I’m a big jazz fan. And he’s one of the most exciting jazz singers on the scene right now. He’s a Grammy Award winner. His voice is so interesting. He’s got great energy. He’s actually being featured on another song we’ve been playing from Disclosure called “Holding On.” It’s very accessible. Some jazz can be kind of weird and abstract. This is straightforward. It’s got great energy. It’s kind of funky and it’s really fun.

Justin: What makes him one of the best jazz singers?

Glenn: He’s a great writer. He’s very thoughtful. His voice is just so raw and interesting. He, like many singers, came from the church. He really communicates feelings. And it’s really fun. I just think it’s a fun thing to bop along to.

This is Andrew Bird operating at peak Andrew Birdness. And it’s perfect.

Hear all 5 Songs We Can Stop Listening To: