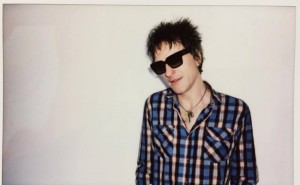 1. Tommy Stinson picks “The Rat” by The Walkmen

Every week we invite a guest or two to talk about one song that they love. This week we sat down with Tommy Stinson

Justin Barney: Tommy, what is one song you can’t stop listening to?

Tommy Stinson: “One song I can’t stop listening to… ‘The Rat’ by The Walkmen. I love that song. It’s been in the back of my mind since the first time I heard it. It’s always there and I always crank it up when I’m feeling feisty.”

“Golden Rules” is a mixture of Hip-hop and soul.  It’s like Andre 3000 meets Frank Ocean meets Anita Baker on the film of a James Bond film. Florida born Eric Biddiness brings downbeat introspective hip-hop. His raps are one continuous flow. His slight southern drawl works well with hip-hop, it lets the words and sounds flow into each other, like oil and water they are distinct, but move together as one, swimming between London native Paul White’s soulful production. This song’s so smooth you gotta bob your head.

I was watching Letterman once and a comedian was his guest, I want to say it was Jonah Hill or something, but don’t quote me on that, I couldn’t figure it out and my research didn’t help, but the point is, it was a funny guy. He comes out, Letterman says “Hi” he gives a little smile and says “Hello” and the audience laughed, and then he said, “What was funny about that?” And then everybody laughed even harder, but you could tell that it wasn’t a joke, he was just greeting the host, but because he is a funny guy, everybody was expecting a joke, so they laughed, even when he was being serious. I really felt for him in that moment. He was totally misunderstood and everybody just saw what they wanted to see in him. No one took him seriously. And it was kind of a sad moment for me. Lucy Dacus feels puts that feeling right into the title of her song, “I Don’t Want To Be Funny Anymore.”

4. THANKSGIVING SPECIAL: Van Morrison – “And It Stoned Me”

Since it’s Thanksgiving I was trying to think of artists that I am thankful for. The artist that comes to mind for me is Van Morrison.

Van Morrison taught me sweet sadness in music. He sings from his gut and he’s driven by his heart. But more than that, he has given me great memories that I am thankful for.

Every time I hear this song I think of driving through Bay View as a kid. My dad in the driver’s seat, and my brother sitting next to me. This song is playing off my dad’s “The Best of Van Morrison” cassette, this song starts, and we all go into the same horrible Van Morrison impression and sing, “Half a mile from county fair, and the rain came pouring down, me and Billy standing there, with a silver half-a-crown.”

That’s a memory I’m thankful for.

5. Brent Knopf picks Talking Heads – “This Must Be The Place (Naïve Melody)

This week we sat down and talked to Brent Knopf of the band EL VY, Memomena, and Ramona Falls.

Justin Barney: Brent, what is one song that you can’t stop listening to?

Brent Knopf: “Well I hesitate to mention it because I feel like it might be so many people’s favorite, it’s ‘This Must Be The Place (Naïve Melody) by Talking Heads as performed live on the Stop Making Sense documentary. That is my favorite piece of music. It’s better than the album version. And I can’t help but dance. Somehow it’s the most life affirming song to me without being the least bit cheesy. I don’t know how they did it, but I love it.”

JB: Why do you think the Stop Making Sense version is better than the album version?

BK: “I don’t know! Maybe it has a little more roughness around the edges, or maybe it’s a little more loose, or maybe I can’t get the image of David Byrne dancing with a lamp out of my head. Which is one of my favorite dance routines of all time.

JB: They do the Milwaukee Film Festival here and they always screen Stop Making Sense every year and it’s just like the best because it’s like a concert. Everyone just gets up and dances after everything. Everyone claps. During that song the executive director of the festival was next to me and was yelling ‘I LOVE YOU DAVID BYRNE!’ at the screen, and it’s always just a total blast. *laughs*

BK: “I just made the playlist for the EL VY concerts, so I get to choose the music at the doors, after the opener, and after we play, and that’s the song that comes on after we start playing because I want to keep the good vibes going.”

Listen to “5 Songs We Can’t Stop Listening To” every weekday at 9am and 7pm on 88Nine Radio Milwaukee.