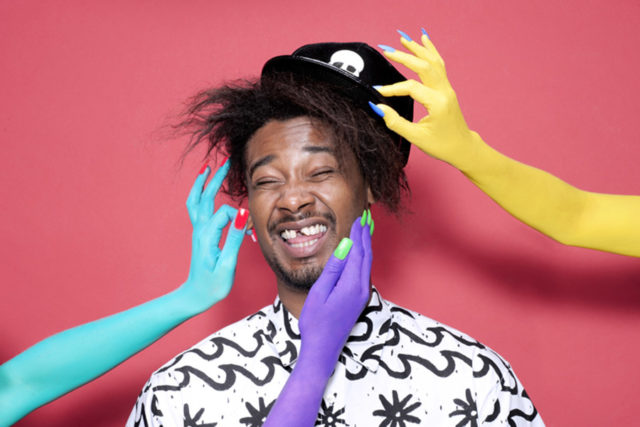 Every week we start off by asking one artist that we love to talk about a song that they love. At Eaux Claires last week me and my co-worker Makenzie Boettcher got to talk to Danny Brown.

Danny Brown, from Detroit Michigan, has this nasally, erratic delivery and the production on his songs defy and challenge genres. He is entertaining, thoughtful and original. I was so pleased that we got to sit in his dressing room and talk with Danny Brown.

Makenzie Boettcher: What’s a current song that you’ve been listening to? Or one song you can’t stop listening to?

I’m usually pretty hesitant on pairing music with some part of the year. You know, summer songs vs. Winter songs and that. But sometimes there is something to it. And maybe the summer heat is getting to me, but there is something about this song that is sun soaked.

Like that dead heat of the summer where the humidity hits so hard that it seems to be physically slowing things down.

Where even the shade seems to be melting.

You’re locked to your chair with a drink sweating in your hand and your sunglasses on your face thinking, “When is this going to end?”

It feels like your body weighs an extra 20 pounds and doing anything just feels…tiring. That’s when you want to listen to this song.

That’s just what happened with this song, “Diamond Day” by Mutual Benefit.

And then I saw that it’s a cover of Vashti Bunyun.

Vashti Bunyan, born in Newcastle, England in 1945. After trying a single or two in England with The Rolling Stones manager as her advisor, she left the scene and traveled the Scottish countryside with her boyfriend in a horse and buggy. Along the way she wrote a collection of songs that would become her debut album. They are delicate and pastoral.

When she released the album, “Just Another Diamond Day” it sold very few copies, and Bunyan got discouraged abandoned her musical career.

30 years later the album had gotten this cult following. Encouraged by the cult following in 2005, 35 years after her debut, Vashti released her second album.

It’s a great musical story that I would never have known unless Mutual Benefit covered this song.

Justin Barney: This is 5 Songs We Can’t Stop Listening To and I’m here with Makenzie Boettcher. Mak, what is one song you can’t stop listening to?

Makenzie Boettcher: One song I can’t stop listening to is the song “Radar Detector” by Mr. Darwin Deez.

Makenzie Boettcher: I know you know!

Makenzie Boettcher: I saw him play a show in Riverwest!

Justin Barney: So, tell me about this show. Darwin Deez played a show in a Riverwest basement.

Justin Barney: Darwin Deez, notable musician, doing a normal tour around the U.S., did not have a date in Milwaukee yet he played this show in Riverwest that you went to. How did that happen?

Makenzie Boettcher: Right. So, what happened was Joe Tomcheck, lead singer of Paper Holland, a fan of Darwin Deez, was just like, “Oh I see Darwin Deez is not doing anything this night and will be traveling through the Milwaukee area” and out of the blue, was just like, “We’ll tweet at him and see what he says.” So, he literally tweeted at Darwin Deez and was like, “Hey man, you want to play this show with us and some Milwaukee bands on the day that you’re going to be in Milwaukee?” and I guess he tweeted back and was like, “Yeah!” and everyone was like, “…what!?”

Justin Barney: Was not expecting that.

Makenzie Boettcher: Right! Keep in mind, it wasn’t a venue. When I say, “basement show” it was like an unfinished basement in Riverwest.

Justin Barney: So how was the show?

Makenzie Boettcher: The show was awesome! The show was great. This basement was hot, it was humid, it was thunder storming outside, we all walked, it was a Monday night. It was one of those things where we were like, “We don’t care. We don’t care that it’s a million degrees and humid as hell down here. We’re having a great time.” We all danced, there were lights, and we had fun. It was beautiful.

Music is about intimacy. Why do we fanboy/girl over artists? When we are teenagers we want to date them or we feel like we know them personally.

It’s a person. Whispering in your ear. Telling you what makes them sad or happy. Telling secrets.

In this song, Ellen Kempner, lead singer of Palehound, literally whispers in your ear. It’s a move I’ve only known Nick Cave, Bjork, and the Ying Yang Twins to do do in a song.  I love it. You can almost feel her breath. And oddly it adds a playfulness to the song. It’s so personal.