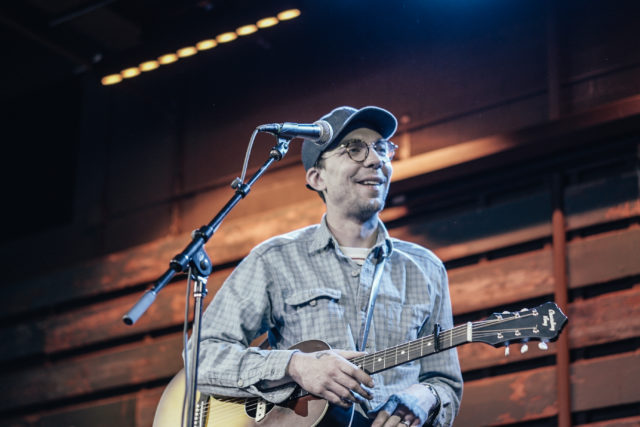 This is 5 Songs We Can’t Stop Listening To. Every week we ask one artist that we love to talk to us about a song that they love. Justin Townes Earle has been releasing albums for ten years. He’s played every venue from Bonnaroo to the Grand Ole Opry. He’s the son of Steve Earle. He has a new album out that’s called “Kids in the Street.” I’m here with Justin Townes Earle.

Justin Barney: Justin Townes Earle, what is one song you can’t stop listening to?

Justin Townes Earle: Wow… Well… “Graceland.” I mean I ended up recording it and because it’s stuck with me for so long.

You can pick that track apart and find something new and cool about it every time. And then you can strip it down and take everything off of it, and you’ve still got a great song.

Justin Barney: What kind of aspect do you like about the song? Is it the lyrics or the instrumentation or what?

Justin Townes Earle: I mean it has to be the lyrics for me. I mean the instrumentation can be all great, but I want a songwriter as opposed to a musician. So it’s a bit of both. But it’s more of the lyrics. Absolutely.

Justin Barney: What are the lyrics in “Graceland” about?

Justin Townes Earle: Well, I guess they can be open to interpretation, but to me, what I hear is change. Unbridled change. Things that we cannot stop, but we have to live with.

The chances that we take and the people that we choose to spend that time with make all the difference in the world.

I’m not going to pretend like I know what being cool is, but it’s like that definition of obscenity given by the supreme court in the 1960’s, “You know it when you see it.”

Usually talking about being cool is very uncool. But there has been a couple times where it has been pulled off in music.

On an album released in 1995 Screamin’ Jay Hawkin’s proclaimed “I am the Cool.” Just two years ago rapping with Donnie Trumpet, Chance said, “I don’t wanna be cool.” Finally, in 2017, Zach Villere, sticks his arm up in the air in this song and admits that he’s always wanted to be cool.

Offa Rex is a collaboration between British singer Olivia Chaney and The Decemberists. It was born out of Colin Meloy’s interest in British folk music and the entire album is them doing old British Folk songs.

And this totally makes sense. If you’ve ever listened to The Decemberists, an entire album of ancient British folk songs makes total sense. I’m actually surprised they didn’t do it sooner.

This song, “Blackleg Miner” is believed to originate from a failed miners’ lockout in 1844.

So what happened was there was this village, the Village of Seghill. It was a village where miners and lived. They were put up by their employer. One day these workers went on strike. Because of this their employer evicted them, and their families from their houses. Leaving almost an entire community homeless and unemployed. So the strikers are fighting for their livelihood.

The song is about standing against the strikebreakers, or blackleg miners who tried to undercut the strikes efforts.

Justin Barney: This is 5 Songs We Can’t Stop Listening To and I’m here with our very own Nate Imig. Nate, what is one song you can’t stop listening to?

Nate Imig: Well I thought I’d really class up your segment Justin. And I wrestled with this a bit because a lot of the songs I can’t stop listening to are songs that you already hear on 88Nine, so I wanted to play something that I play at home, that is topical, and that is from Katy Perry…

Justin Barney: So tell me about the song.

And by the way, when she performed it on SNL the other week she brought out all these drag queens and dancers and I just love all the open acceptance and the reaching out to the LGBTQ+ community and I just love the song.

Justin Barney: I was first introduced to this song by Tarik Moody, so I have Tarik in the studio with me. Tarik, can you tell me a little bit about “LaCroix Boi” or Big Dipper.

Tarik Moody: Big Dipper is kind of this parody rapper, he makes fun songs making fun of different things. “LaCroix Boi” is sharing his love for that Wisconsin Sparkling beverage that I first came to know when I moved to Milwaukee. I never heard of it before I got here and everybody drinks it here. And it was a real nice treat to see.

Especially when you look at all the news and all the bad news in the world, all the craziness, and to watch that and have it put a smile on your face and it made me feel good.

Justin Barney: Totally. And I love it because I take music so seriously so often, and it’s just good to have something that is just pure fun.

Tarik Moody: Watching the video alone was just so entertaining. The guy is wearing a jacket made out of LaCroix cans, he is doing weird twerks, and pouring LaCroix all over his body and stuff. It just put a smile on my face.