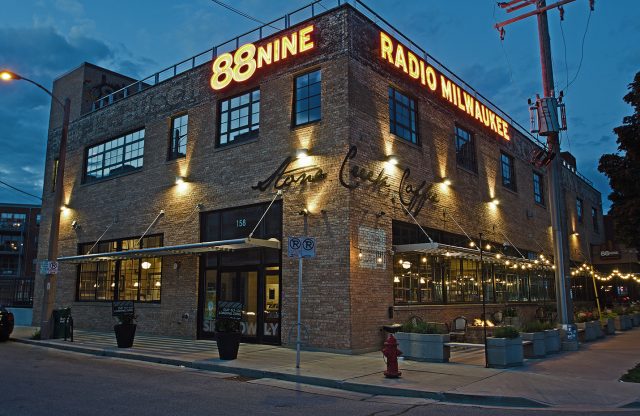 With music from The War on Drugs, Barrington Levy, Temples, Her, Temples, and Leon Bridges

This is 5 Songs We Can’t Stop Listening To. Right now we are in our Membership Drive. You can donate at radiomilwaukee.wpengine.com/donate or by calling (414) 892-7970. Since we are in the membership drive we are highlighting some of the twenty plus employees of 88Nine Radio Milwaukee. Each person has their title next to their name. Thanks for reading and listening to 88Nine Radio Milwaukee, please consider a contribution.

Justin Barney:  This is 5 Songs We Can’t Stop Listening To and every week we usually start off with a musical guest but since we are in the Fun Drive we are going to highlight all the people that work behind the scenes at Radio Milwaukee to make this happen every single day.  Today I am here with our development assistant, Chyna.  Hi, Chyna.

Justin Barney:  What do you like about The War on Drugs?

Chyna Witzki: I’m a huge Bruce Springsteen fan, so they have a little bit of the Bruce thing going on, a little 80s kinda coming through.

Justin Barney: What about this song in particular?

Chyna Witzki: I just think there’s so much depth to the lyrics and everything, but then there’s also like a synthesizer going and it’s just kind of a dance song with deep lyrics coming through.

Justin Barney: What are the lyrics talking about?

Chyna Witzki: I think-you know, it’s just about life and challenges and I think-you know, I think everyone’s had a ship burning in their life before, but when you have a synthesizer over it and some upbeat tunes and just kind of coming through that.  I think that’s kind of powerful.

Justin Barney: Francesca, what is your official title?

Francesca Kempfer: I am Development Director here at Radio Milwaukee, which means I am responsible for raising money from our wonderful members and listeners and keeping Radio Milwaukee on solid financial footing.

Francesca Kempfer:  Well, I chose, I took it very literally and thought what have I been playing a lot lately.  And I chose a song called Here I Come by Barrington Levy. It’s a reggae song and I think it’s from the mid 80s and it’s just something I’ve listened to over and over lately.

Justin Barney: What do you like about the sound of it?

Francesca Kempfer:  Well, that’s a great question and honestly, I don’t even know half the time what this guy is singing about but he’s got this great-you’ve gotta listen to it to hear it-these little voice tricks that he uses, like ‘sikidi-doodlely-” [laughs] I can’t do it!

Francesca Kempfer: So catchy and so much fun.

Justin Barney: This is 5 Songs We Can’t Stop Listening To and I’m here with our Executive Director, Glenn Kleiman. Hey, Glenn.

Glenn Kleiman: Hey, Justin. How are you?

Justin Barney: Good. How are you?

Glenn Kleiman: I just heard this new song by a band called Her.  H-E-R, and the song is called Swim.

Justin Barney: Not the greatest google search optimization.  What do you like about this song?

Glenn Kleiman: It’s kinda-it’s gotta a kinda R&B soul vibe but in a more contemporary way. And I love late 60s, early 70s, you know, R&B soul and this feels like an updated version of that.  It starts kind of slow and then it kind of rolls into this nice soul/funk kind of vibe.  These two guys are from France and they’re getting some attention over in Europe.  The DJ Zane Lowe loves them and is really promoting them and they’re just coming over to the United States now.  And I think, I don’t know, I think it’s really fun.

4. Alyssa Feuerer (Marketing) picks “Strange or be Forgotten” by Temples

Justin Barney:  What do you do Alyssa?

Alyssa Feuerer:  I work on the Marketing Team here at 88Nine, so I’m responsible for making sure more people know who we are.

Justin Barney: Alright, yeah, a very important thing.  What is one song you can’t stop listening to?

Alyssa Feuerer: My song that I cannot stop listening to is a song by Temples.  It’s called Strange Or Be Forgotten.

Justin Barney: And what do you like about this song?

Alyssa Feuerer:  It’s a combination of both the words and the sound, I think.  The first time I heard it I was so captured by the sound of the song.  I think the build up to the pre chorus and the chorus just kind of-almost just kind of put a big smile on my face.  It just has this dreamy sense to it.  And then the lyrics are just so powerful.  When you really look into what the deep meaning of the song is, it’s really about people trying so hard to stand out and be different when really everyone is different from the beginning, from where you even came from.  Yeah, it’s maybe about taking a step back and just trying to be yourself and celebrating people for who they are.

Justin Barney: I think that’s super interesting because bands have to do that, bands have to be different in order to stick out.  And I like that, kind of like we’re inherently different to begin with.

Alyssa Feuerer:  Yeah, and I think even in like the age of social media and everyone to talk over each other and stand out and be different it’s-sometimes you kind of forget that like, you can be your true self and that’s kind of what makes you unique.  And you don’t have to put on this kind of this mask or this fake persona to try to just to make other people just know who you are, just make other people take notice. It’s not that important at the end of the day.

Justin Barney: Katelyn is one of our fantastic interns and what is one song you can’t stop listening to?

Katelyn Stamas: One song I can’t stop listening to is “River” by Leon Bridges

Justin Barney: I love me some Leon Bridges.

Justin Barney: He is.

Katelyn Stamas: Now, this is definitely the song that I would choose to dance to at my wedding is what I’ve now decided.

Katelyn Stamas: I mean, it’s kinda sad at some parts but you know I don’t think it’s really that sad cause I like it so much.

Katelyn Stamas: It is so beautiful. He’s got a great voice too.

Justin Barney: What do you like about Leon Bridges?

Katelyn Stamas: Oh man, besides his smooth vocals? He sometimes uses a lot of background female vocals which I actually…

Justin Barney: This is actually a lot background music.

Katelyn Stamas: It makes it so different and just a different experience I think.

Justin Barney: I think this song, I feel is a different experience on the album. Cause this is like the slowed down, this is the gospel song.

Justin Barney: This is you know, you’re getting baptized in the water.

Katelyn Stamas: I wanted to get baptized in the water about ten different times listening to this.