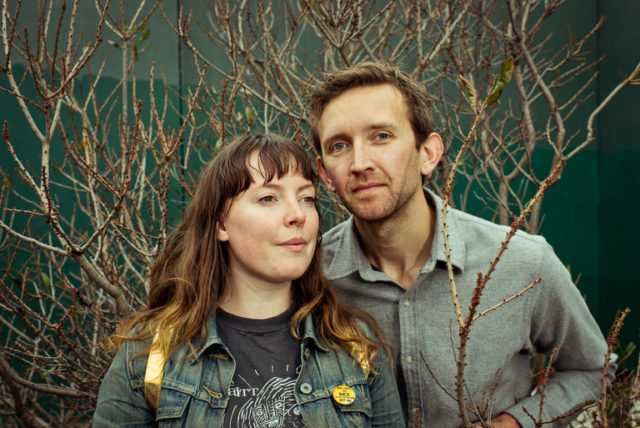 We always kick off the countdown by asking one artist that we love to pick a song. Sylvan Esso is a band that met right here in Milwaukee WI, at the Cactus Club. They released their self-titled debut a couple years ago, and their new album, “What Now?” is out now.

I’ve talked to them a couple times and every time I talk to them it’s just so apparent how legitimately in-love they are and how well they know each other. So when we were at Eaux Claires recently I asked each of them what song the other one couldn’t stop listening to.

Justin Barney: What is one song that Nick can’t stop listening to?

Amelia Meath: “Conceptual Romance” you’ve been listening to a lot.

Justin Barney: By who?

Nick Sanborn: I think that record as a whole is one of the greatest pieces of conceptual album art that I have ever listened to.

I mean, it’s a very out, beautiful about her being a woman.

There is a number of times where the whole pastiche collects together in these moments of genuinely focused pop, and this is one of them. The minute it starts it’s like you have just been waiting for it to congeal this entire time and it’s just absolutely gorgeous.

Justin Barney: What is a song that Amelia can’t stop listening to?

Amelia Meath: There is one that you don’t know about yet.

Nick Sanborn: Really?? You think I don’t know about it…well, I would have guessed something by Kendrick Lamar, but now I’m curious. I feel like it was “DNA” for a while there.

Amelia Meath: It was “DNA” for a while there, but now it’s Lorde’s “Green Light.”

Nick Sanborn: That makes total sense to me!

Justin Barney: Because it’s a banger?

Amelia Meath: Yeah because it does that thing where it feels like you’re melting and also solid at the same time when you’re hearing it.

Nick Sanborn: That is one that didn’t speak to me at first and has grown on me so gradually and so steadfastly and now I like love it.

This song is like something out of a David Lynch film. The smoking a blue cigar. The completely deadpan delivery. The whisper.

It is odd, and yet completely normal. It slinks.

There is something in the air of this song that is just cool.

Justin Barney: This is 5 Songs We Can’t Stop Listening To and with me is our DJ, Sarah Fierek. Hi Sarah.

Justin Barney: Sarah, what is one song that you can’t stop listening to?

Sarah Fierek: So you caught me in a week where we just kind of got done with a lot of busy events and our ten year block party.

Sarah Fierek: …Family Reunion, Summerfest starting, all of that. So, you know, sometimes I just try to go back to like… being able to reflect and to just relax for a moment

Justin Barney: And calm down a little bit, yeah

Sarah Fierek: Because I feel like I don’t often times take the time that I need to now
Justin Barney: Yes.

Sarah Fierek: I grew up in the country so like having some time to take a walk, throw on some earbuds, listen to some good music, and for me, sometimes listening to something that doesn’t have words helps me get into that more meditative state of mind

Sarah Fierek: So the song I couldn’t stop listening to this week was Zoë Keating. The song is called “Sun Will Set.” Something about it just kind of took me back to a meditative state and a point of reflection and being able to really be grateful for the great week that we had last week.

Sarah Fierek: After I was listening to the song, I kind of reminded myself that I at one point wrote this quote that was, “take time or time will take you” and this song kind of really allows you to be free and its seven minutes long so we won’t play the full version today but for those that may enjoy the teaser, I would definitely suggest buying the album and checking it out.

Justin Barney: Totally. What’s the name of the song?

Justin Barney: Let’s do it

Writing a piano ballot about New York as a rite of passage.

Writing a song about New York is a bit of a rite of passage as a musician. Look at Frank Sinatra, Bob Dylan, The Sex Pistols, Simon & Garfunkel, Lou Reed, U2, LCD Soundsystem, DJ Khaled,

One time Mac Demarco told me that Billie Joel was a con man because he wrote all these songs about New York that, of course, they would play on the radio all the time in New York, and then you’d grow to love them and, in turn, him.

It’s not as angular and futuristic as her last album, St. Vincent, it’s a plowing piano ballad that grits it’s teeth through it’s own beauty with the chorus featuring a two part word that I am forbidden by the FCC from saying out loud on the radio.

And also driving it is it’s feeling.  About being in the biggest city in the country and having one person that understands you.