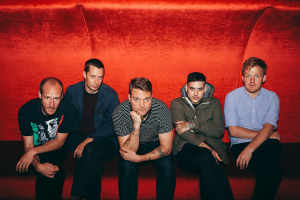 This week is an artist takeover of 5 Songs We Can’t Stop Listening To.

That means we are giving the reigns to the artists that we love. They’ve picked the songs. Listen to every artist talk about why he or she picked the song in the Mixcloud link below. Or, read what they said in the article. This is 5 songs that our favorite musicians can’t stop listening to.

Nathan Willett (vocalist and lead guitarist): All the imagery is so away from anything big city. It’s away from the kind of crazy surreal imagery that he was doing before that. It’s so straightforward feeling and because of that it’s so comforting … (sigh) …and this bridge right here is so good. [sings line form song]

It’s just simple. And I remember the first time I heard this album New Morning and I was thinking ‘This is kinda boring’ it’s just kind of this real pastoral. I think as you get older you like that stuff more.

What’s this line? Let’s wait for this line. [“Build me a cabin in Utah’] This is like the Bon Iver dream, but like 30 years ahead of it. [sings along] ‘Catch rainbow trout/ have a couple kinds that call me pa’ God.’  And that’s like the record as a hole right there. Like, ‘What? Yeah. That’s what I want.’

2. Asgeir picks Tallest Man On Earth – “Love Is All”

Asgeir: One song by a guy who calls himself The Tallest Man on Earth. He’s a Sweedish guy. I actually love his songs equally, but one maybe stands out, it’s called “Love Is All.” Well it was the first time I was hearing his music, and his voice, and his guitar playing. His music is all stripped down to guitar and vocals and his whole sound just kind of did something to me.

Jason McGerr (drummer): Kendrick Lamar’s new album, “To Pimp A Butterfly,” is pretty sick. I feel like the first two tracks take the listener and forces them to make a decision about whether or not they are going to continue on with the record. I mean, it’s such a challenging record. But, you know, George Clinton and Miles Davis also challenged the world and they became famous for it.

I just feel like that guy is unstoppable and fearless. Every time I see a live performance of him it’s mind-blowing how much he’s got an audience and a band in his hand, willing to go wherever he needs them to go.

“King Kunta” the third track on the record is such a sick groove. So sick. So heavy. And, you know, I’m a drummer. Rhythm section guy, so it doesn’t get much better than that.

Justin Barney: “Who is a song writer you really love?”

Molly Rankin (vocalist): I love Stephin Merritt, from The Magnetic Fields. I love his writing. Who else do I like? Mainly Stephin Merritt, ’cause he’s just so pathetic. And it’s always in this really lighthearted way and I love that approach where he is not a victim, and he just laughs at how lonely he is. That’s how I take it. Maybe it is really dark and bleak but I mean the way that I write… some people take it to be a little bit heavier that maybe it is.

Justin Barney: What is your favorite song that he does?

5. My Morning Jacket picks “For A Dancer” by Jackson Browne

Carl Broemel (guitar, pedal steel guitar, sax, backup vocals): I think the last song that kinda blew my mind was a song I’ve listened to a thousand times. You know how you listen to a song a bunch and you don’t really listen to the third verse? You know, it’s just kinda floating past you? But I was listening to “For a Dancer” by Jackson Browne the other day and third verse came by and I just started to get a little misty. You know what I’m talking about?”

Carl Broemel: When he’s like, “Say a prayer for the human race/ go sew some seeds of your own/ you might not even know what your life meaning is/ but maybe there is one.” It was so awesome. And I was like, ‘Man I’ve heard this album a thousand times.’ And I’m always listening to the lap steel parts and then I listened to the vocals and I was like, ‘Oooooouuufffff’

Jim James: It’s amazing how many different things there are to listen to at any given time.