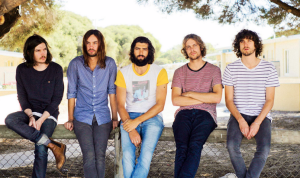 Are these the headliners of a killer music festival? No. They’re just a few of the artists this summer who have come onto our segment “5 Songs We Can’t Stop Listening To” and told us about songs they love.

Hear Kevin Parker of Tame Impala gush in his Australian accent about the DIY sound of Unknown Mortal Orchestra. Hear the excitement in Amelia Meath’s voice as she yells “BOO BOO!” while talking about Kendrick Lamar. Talib Kweli and Polica speak to the importance of their children in the music that they are listening to.

Hear all these artists talk about their favorite songs:

Kevin Parker: “The song’s really cool. It’s just got really clever hooks. It’s full of really pretty melodies. He sings kind of R&B melodies, which are cool sounding and soulful. But, it’s done kind of DIY. It’s like DIY-dude-making-cool-sounding-R&B. You know, he just sings in that kind of way and has a great voice, but it’s not one of those super trained, Hollywood R&B voices. You can hear just a guy wanting to make this collage of cool sounding music.”

Amelia Meath: “I can’t stop listening to Hood Politics off the Kendrick Lamar record right now. It’s so good — just the beat structure, and the idea of using the word ‘boo-boo’ over and over again, it’s so fulfilling. It doesn’t necessarily mean anything but by using it he infuses all this meaning. And also that verse, where he starts tripping over himself ‘get up what up I heard they opened up Pandora’s box’ like that, it’s like, ‘AGHH!’ [cute Amelia scream]. And it’s right after he talks about how he’s owning so hard right now, and then he just slams everyone’s faces in the dirt with it, being like: ‘Yeah, I’m the best rapper. Have you noticed?’ It’s so good.”

Talib Kweli: “One song I can’t stop listening to is ‘Your Daddy Loves His Girl’ by Gil Scott Heron. It’s a very powerful song. I have a daughter but I don’t think you need to have a daughter to understand, you know, a parent talking to a daughter and his thoughts while she’s sleeping, and dealing with the problems in a relationship with the other half, or the spouse. Also Gil Scott, just the way that he sings — the raw emotion, the lack of pretense and the lack of studio magic that you hear in his songs is something that is just very simple, basic song that is very short so you want to play it again. That’s it, it’s just a great piece of work.”

Rufus Wainright: “I’m really obsessed with this artist Judee Sill right now. She’s from the 70’s and she wrote a song called ‘Jesus Was a Cross Maker.’ And it’s a fabulous song. She died too young and was basically a troubled soul. And she worked a lot with David Geffen before Joni Mitchell, so she’s this very unusual artist that I’m really enjoying right now. You know me, looking for the dead people, as usual.”

Polica: “I’ll do Michael Jackson, just because at our house right now there is a general obsession with him, headed by my daughter. She just discovered him so it’s like ‘Billie Jean’ on repeat all day and all night.”

Justin Barney: “How old is your daughter?”

Polica: “She’s six. So it’s like her first musical discovery and she’s on a rampage.  I try to show her like Beyonce, Janet, Whitney…It’s okay but she’s just not that interested. And I’m like, ‘Wow” she’s just so specific.”

JB: “Did you introduce her to him?”

Polica: “Actually my mom did, which is pretty hilarious. Like all of her people, her dad, me, her step-dad, all musicians, not really killin’ it on introducing her to anything. It was her grandma.

JB:  “That’s good. That means that you are a good parent. It seems like you are trying to get her to lash out at your own authority.” (laughs)

Polica:  “Yeah, she will probably rebel with really horrible music taste. But yeah, I very much condone Michael Jackson, he is one of the best.”