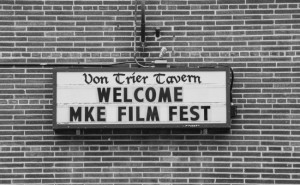 The Milwaukee Film Festival is our favorite two weeks of the year. When else could we sell out the Oriental Theater for a silent movie made in 1923, pack audiences in for dozens and dozens of foreign language films, or screen curated short films? This stuff just doesn’t happen during the other 50 weeks of the year, so let’s take two weeks and just nerd out.

If you are not sure about what to see and you love music, these are the films playing at the festival that combine the two world of film and music.

1. Theory of Obscurity: A Film About the Residents: The Residents – “Heartbreak Hotel”

The Residents are a weird band.

Their music is weird. My mother wouldn’t consider it music at all.They don’t play by the rules. They make them up. Their music is just part of their Avant-garde artistic package.

Their performances are weird. They have been known to come out looking like Christmas worst nightmare, in Santa suits and mad scientist masks with a crooked nose about a foot long, and thin white hair. For about a decade they all performed in these helmets that were just one big eyeball with a tophat fixed to the top as they performed album with titles like Third Rich’n’roll and Duck Stab.

The Residents haven never been photographed. Never interviewed. They are completely anonymous. And that anonymity has given them license to do what they do. It gives them the air of mystery. And that is what makes this movie intriguing. Who are the Residents?

2. The Glamour and the Squalor: Subject Marco Collins picks “The Hills” by The Weeknd

Marco Collins: The song I want to play is from a guy that’s huge right now. I’ve been obsessed with him since his first record came out and it’s a guy known as The Weeknd. I think I got obsessed with him because I heard his first record and he sampled Susie and the Banshee’s and Beachhouse and I thought, ‘Wow, that’s ballsy for an R&B singer to be embracing sort of indie rock culture.’ And I’ve just fallen in love with the dark, dark lyrical content that he normally puts out. The thing that I love about music is sort of the light and the dark coming together. I love that juxtaposition between evil and good as it were, like, just the idea that those two things, ya know, beauty and ugly, can come together and make some of the best art ever.

Justin Barney: What do you like about this song in particular?

Marco Collins: The hills to me, well, I love the chorus but I love the bridge of the song because the song changes completely. With just about two minutes left in the song, it almost turns into a Tears for Fears song.

Justin Barney: I don’t think that I have ever heard anyone say, ‘You gotta check out the bridge on this song.’ (Laughs)

Marco Collins: (Laughs) I mean, I don’t even know if people know what the bridge is. It’s the part of the song that changes everything before it goes back into the verses and it’s very obvious in this song when you hear that one piece of music that sounds nothing like anything else.

It’s 2015.  To succeed as a musician you need a great song and a great music video. For artists there are streaming platforms like Spotify, Pandora, and Apple Music, but one of the largest streaming platforms is still Youtube. And rightfully so. A great looking music video, done by professional can show how legitimate a band’s music is. And it works the other way too. A music video is a great way for directors to show how brilliant their film making can be. And when musicians and filmmakers in the same city get together, it can boost the whole cultural impact of the city itself.

4. The Winding Stream: The Carter Family – “Can The Circle Be Unbroken”

The Carter Family started in the nineteen teens when traveling salesman A.P. Carter heard young Sara Dougherty singing in the yard of her Virginia home. She told him that she was selling dishes, and he said if she came with them he’d buy the entire set. By 1915 they were married.

Their music has found its way into the backbone of what we consider American music, and you probably know many of the songs that they recorded. Almost 100 years later, their music still carries on.

The screening of the 1984 Talking Heads concert documentary Stop Making Sense was the highlight of my film festival experience last year. As an audience we collectively rejected the idea that the concert was happening on a screen and that we weren’t there in the audience in 1984. When David Byrne ran around the stage   during “Life During Wartime” we got out of our seats and ran around the theater, when he shimmied in his big suit we yelled out and cheered him on, and when he sang this song, we clutched our hearts, knowing that we were in heaven. And the band in heaven, they were playing our favorite song, playing it one more time, playing it all night long.

This Saturday, at the Oriental Theater in Milwaukee, Wisconsin we can have Heaven on Earth, at the screening of “Stop Making Sense”.