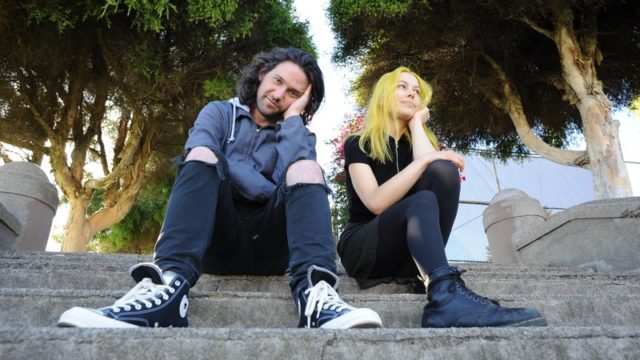 Better Oblivion Community Center is Conor Oberst and Phoebe Bridgers, two of my favorite musicians. Conor Oberst was in the band Bright Eyes and had a long solo career, and Phoebe Bridgers is also one of the greatest songwriters making music right now. Combined, they released a surprise album earlier this year, called “Better Oblivion Community Center.” We have been playing the songs “Dylan Thomas” and “My City” from that album.

Justin Barney: I want to talk about what music y’all are listening to. Since we’ve got both of you, I was thinking, if there was a musical Venn diagram of both of you, what is the artist that is in the middle of that Venn diagram?

Phoebe Bridgers: I feel like the large majority of our taste, except for maybe The Doors, are way outside. But I think Soccer Mommy falls directly in the middle for both of us.

Conor Oberst: I feel like we have pretty similar taste in a lot of music.

Phoebe Bridgers: Our “roots” are pretty much the exact same.

Justin Barney: I really like Soccer Mommy, because that’s a newer one in the Venn diagram.

Justin Barney: Can you each individually explain what you like about Soccer Mommy?

Conor Oberst: She writes amazing songs and her voice is extremely recognizable and unique. They’re a great band, too, I just think her songwriting is really top notch.

Phoebe Bridgers: Sophie’s voice is as far from musical theater as you could possibly be. She’s not italicizing the subtext, she’s just throwing away these very hard-hitting lines.

Conor Oberst: The delivery is super casual, which makes it cooler.

Justin Barney: Could we focus in on one song?

Conor Oberst: That’s it. We almost covered that song the other day, but we didn’t quite get it together.

Conor Oberst: We were going to play it in Nashville, where they live, but it was a hectic couple of days before that, so we didn’t have time to learn it.

Phoebe Bridgers: We didn’t have time to do it justice. The lyrics are crazy and the production is awesome. It’s definitely is one of those songs for me where it’s the same three chords that I play all the time, and I convince myself every time I sit down to write a song that there are no more songs to be written with them. It’s an immediate classic, and a “why didn’t I think of that” song for me.

Phoebe Bridgers: In literal terms, it’s about being with someone who gave you attention and then they are taking it away for someone else. But, I think on a deeper level, it’s about the way the writer, Sophie, is. The way that she intakes information, and why she is the way that she is. And it’s about astrology, a little bit.

Conor Oberst: The line that references it is about her parents, right? I don’t know much about astrology, but apparently Scorpio is kind of a gnarly sign.

Conor Oberst: People end up being — not necessarily evil, but…

Falling out of love is one of the most difficult emotions to deal with. But one that songs deal with really well. And falling out of love doesn’t necessarily mean this romantic L-O-V-E love. I love a lot of things. I love my job, my friends, traveling. But what if your job, your friends, and traveling are your job? That’s what being in a band is. That love, like any love, can fade. And that’s what this song is about.

3. Maverick Sabre picks ‘I Wanna Be Adored” by The Stone Roses

Maverick Sabre spent his youth in Ireland and then moved to London. He is a big part of the London music scene. We have been playing his song “Slow Down” featuring Jorja Smith.

Justin Barney: What’s the last song that has been stuck in your head?

Maverick Sabre: The last song that’s been stuck in my head was The Stone Roses’ “I Wanna Be Adored.”

Maverick Sabre: The feeling of it sonically and the lyrics. One of the lyrics is, “I don’t have to sell my soul / He’s already in me.” The lyrics capture how I feel, and sonically, every time I hear it, it takes me away into a world for a minute. I don’t know if it’s escapism, I don’t know what it is. It brings my mind somewhere else for the couple of minutes that it’s playing.

Justin Barney: How old where you when you first discovered The Stone Roses?

Justin Barney: Where were you living at that time?

Maverick Sabre: I was home. I moved back to London when I was 17 from Ireland, and I was living between friend’s houses and family houses. I was discovering London for the first time as a 17 year old.

Maverick Sabre: It was a lot of fun. It definitely was.

4. Dori Zori picks “Dig Me Out” by Sleater-Kinney

Justin Barney: I am here with our morning host Dori Zori. Dori what is one song you can’t stop listening to?

Dori Zori: Well, last week it was announced that Sleater-Kinney is coming back to town. Riverside Theater Oct. 16. They are one of my all-time-favorite-bands. We’ve been playing their new song but it’s really sparked a re-love affair with one of their albums called “Dig Me Out” that came out in the late ’90s.

I love Sleater-Kinney because they are a bunch of rockin’ girls that are kind of on the punk rock side of things. Their voices aren’t these beautiful songstresses. They are full of power. Sometimes they almost seem off-key and the lyrics and stuff they write about just really hit home for me.  They made me feel my own personal power as a lady.

This song is a prayer. For God to watch over all his people.

It’s an origin story of a young kid fining his way out through writing.

It is an escape route from, and also an ode to Carol City South Florida.

It’s a eulogy to his brother and rapper XXXTentacion who was shot and killed last year. And a promise that Denzel Curry will live on.

It’s a kind of a big statement song done in a simple way.

It’s also fun as hell. Try not saying swish to the end of every sentence today.