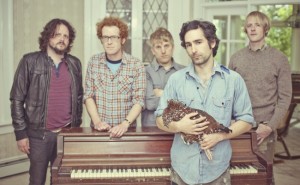 Every week we ask an artist that we love to come on and tell us about a song that they can’t stop listening to. This week we talked to Eric Earley, lead singer of Blitzen Trapper.

Eric Earley: Recently, I have been really addicted to that song about St. Genevieve from ‘Trace’ by Son Volt. It’s an old song.

Justin Barney: Yeah, why that song?

Eric Earley: I don’t know. It’s just cool. It’s like a lonely, kinda, I don’t know. You know, songs just like speak to you at whatever time in your life you are at or whatever, you know. I don’t think I listened to that song in fifteen years either.

JB: When did you hear it for the first time?

JB: Do you think about it the same way now, or is it different?

Eric Earley: No, it’s different. I wasn’t a big fan in high school, my dad was actually. And then recently I started listening to this record and I thought, “Man, this song is good.”

2. Jamaican Queens – “You Can Fall In Love With Anyone”

My friend Steve texted me a text the other day, saying “Have you heard of this band Jamaican Queens? I think you’d dig ‘em” I had not, so I checked them out. And it turns out, I really dig them.

Their lead singer’s voice is in this kind of croonery range that I really love. They mix that with these computerized high hats that are usually used in like hard core electronic music, and it has a string section. None of these things should add up, but they do. This is some of the most original stuff I have heard all year.

I also think that I kind of like it because it was suggested to me by friend Steve, who I think truly original human being, so there might be some bleed over in those thought patterns, but I think that is okay because Steve shared this music with me, and I love it. And now this thing is ours. Our friendship was just improved by this song. And that’s the power of sharing music. So now, I’m sharing this song with you.

3. Maritime picks “Your Love Is Killing Me” by Sharon Van Etten

This week we asked Milwaukee’s own Maritime to come in and tell us what they are listening to.

Dan: “Your Love is Killing Me” by Sharon Van Etten off of her “Are We There?” album. My wife and I have a strange relationship with music that we both like and we both love that song, so I think of her even though the lyrics are, “Your love is killing me.” [laughs]

Justin Barney: What is the strange relationship that you two have with music? What is that?

Right now I’m reading “My Struggle” by Karl Ove Knausgaard. It’s a six volume auto-biographic novel. At six volumes, it get’s pretty involved of the minutia of his life. It’s like you are in his head, experiencing taking his kids to the playground, or visiting his mother. At one point he writes about the idea of fiction itself. He doubts fiction entirely, in favor for the direct gaze of diaries or essay writing saying,

“The only genres I saw value in, which still conferred meaning, were diaries and essays, the types of literature that did not deal with narrative, that were not about anything, but just consisted of a voice, the voice of your own personality, a life, a face, a gaze you could meet. What is a work of art if not the gaze of another person? Not directed above us, nor beneath us, but at the same height as our own gaze. Art cannot be experienced collectively, nothing can, art is something you are alone with. You meet its gaze alone.”

In this song by Florist, you are meeting the gaze of lead singer, Emily Sprague. You are looking directly at her. Into her memories, her weaknesses, her aspirations, her completely. This is the direct gaze.

Maybe I sound like a crazy person, and maybe I am, but Courtney Barnett covering Nick Cave’s very first band, Boys Next Store, and more specifically, a song that I thought was mine and mine alone — ”Shiver” — means that we are indeed, best friends, like we were always meant to be.