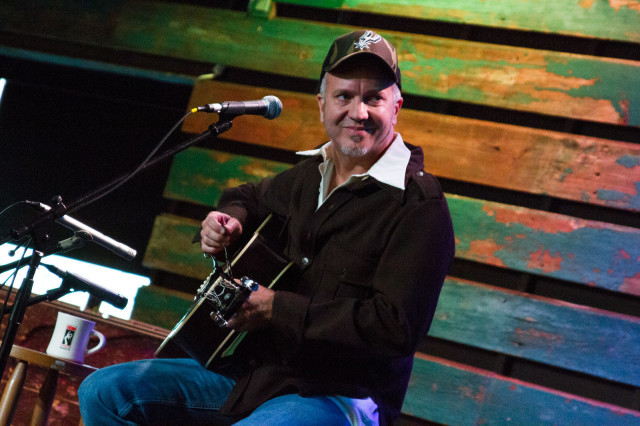 Every week we have a guest or two on the show to tell us about one song that they love. This week we talk to Craig Finn.

Justin Barney: “Craig Finn, thanks for being here. Is there one song that you can’t stop listening to?”

Craig Finn: “’Dream Lover’ by Destroyer. That song is like the best song of the year. It’s got that real cool Bowie thing, and all the saxes. You know there are people out there and people close to me that aren’t big sax people. I am not one of them. I hear a sax and I’m psyched. You know, I would put more sax into all of my music if people would let me.

“You know there is an emotion that comes with the sax that is singular to that instrument. And it makes me feel cool. But I think for younger people, I think some younger people think that it’s kinda square.”

Justin Barney: “I think that the sax is pretty close to the range of the human voice, and so, to me, it’s always felt like a very human instrument.”

Craig Finn: “Yeah, and I mean the most obvious example is Clarence Clemons. But when you are listening to Springsteen, or especially when you’ve seen him live, and when it goes to the sax solo, it is, I think, way more transcendent that a guitar solo. It’s out-of-your-seat-wails, but it can also do that melancholy thing. It’s just fantastic and ‘Dream Lover’ is just a really good use of the sax, and saxophones.”

One of the best relationships you can have a song is when you share it with someone else and it becomes, “Your song.” My sister and I have a song that is “Our song.” It’s “Back when I was 4” by this artist, Jeffery Lewis. It’s our song because it’s unique, it’s funny, and it’s a great story.

Sometimes I want to listen to music to hear stories. Stories never get old. I never get tired of hearing a good story, especially if it is in a song.

This is the story of Jeffery Lewis moving in next to an old man who started screaming at night, then hoping that he doesn’t turn into that old man, and ultimately, becoming his fear and transforming into the sad screaming old man, or does he?  So, scoot up to the front here, and listen closely.

Luckily being sexy comes natural to Milosh, lead siger of Rhye. He is one of the very few people who can just pull it off. And he makes us all look better when we are trying to imitate him.

Rock as we know it, is dying. Four people, getting together in a garage with guitars and drums is being replaced by one person at a computer doing everything. The thing is, it makes total sense. Have you ever tried to get four people together to do anything? It’s a nightmare. And then once they are together it’s a big fight about whose vision it is, and who writes the songs, yadda yadda yadda. There is no fighting when you do everything yourself. And if getting four people together and dealing with their egos wasn’t enough, the start-up cost is incredibly high. You need instruments, that’s hundreds of dollars. Amps, just as much. A space where you aren’t going to get the cops called on you. When you are starting a band the odds are against you.  It’s a million times easier to just buy or illegally download a software program that will keep perfect tempo, cost nothing, and won’t complain about not having that solo after the second verse.

But Savages have faced the odds. They’ve fronted the cost. They’ve dealt with it all. And they rock.

5. JJ Grey picks “Pomps and Pride” by Toots and the Maytals

Justin Barney: “Is there one song right now that you can’t stop listening to, or that you love?”

JJ Grey: “Yeah, I got one. It’s called “Pomps and Pride” by Toots and the Maytals. ‘Cause I can’t even figure out what they are doing rhythmically. It’s just crazy sounding. It’s nasty. I love that song.”

Justin Barney: What do you like about their sound?

JJ Grey: “It’s raw. And the band’s raw. And obviously Toots has one of the greatest voices ever. It’s just like a hurricane coming out of his mouth. With no effort. Him and Otis Redding are my two favorite singers of all time. So Toots, to me, is the greatest soul singer on earth today.”