5 Songs We Can’t Stop Listening To with Forgotten Species

5 Songs We Can’t Stop Listening To with Forgotten Species 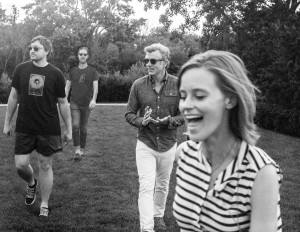 In the 40’s and 50’s there was a stage performer named Lord Buckley. A self-proclaimed hipologist, he took it upon himself to take the works of the vonce, and translate them into a contemporary form. For him, “Friends, Romans countrymen, lend me your ears” became “Hipsters, flipsters, and finger poppin’ daddies, knock me your lobes.” And the story of Jesus of Nazareth became “The Nazz.” By taking the old stories and putting them into a modern context, he showed they are universal ideas.

Craig Finn does a bit of the same in this song. He takes language used in the Bible and inserts it to a modern context. In this song, an untrustworthy friend becomes “Doubting Thomas,” getting high is ascending, and there are nails in his hands. By using this language he shows even though times have changed, the ideas are eternal. Man has always gone through struggle and here he comes out with a faith in the future. And that’s the idea that will live on.

The bass guitar is a seriously under appreciated instrument. I mean, it’s in basically every song that exists, but you never see Rolling Stone’s 100 greatest bassists of all time, or 10 bass solos that will literally change your life, and no one ever wants to interview the bass player.

But recently, Thundercat has been changing that. He’s been rumbling behind Flying Lotus, Kamasi Washington, and Kendrick Lamar. 2015 has brought the funk back, and Thundercat is largely responsible for that. So, for once, let’s check out the bass on this song.

3. Shannon and the Clams – “Corvette”

The knight in shining armor goes back to the Victorian era. The age of chivalry. Where a man of distinction, astride a horse, might save a damsel in distress. And even in that time, that character lived more in the Victorian novels, and pop culture of the time, probably more than it did in real life. Even then he was a myth.

Things haven’t changed much. In this song, the knight in shining armor takes a new form. He is leather clad greaser, gripped leather gloves point toward the sun, astride a red corvette. As Shannon Shaw sings of the great times they had together, there is sadness in her voice. It’s revealed that, like many romanticized ideas of a perfect partner, he never actually showed up.

Most songs take you a short distance, and then bring you right back to the same place over and over again. That place is the chorus, or “hook.” And, I like that and all, but it’s limiting. It can only take you so far, before turning around and coming back.

This song doesn’t want to bring you back to where you started. It wants to take you somewhere else. It wants to go the distance. So it leaves that form behind and tells a story of its own, with each layer building and building as it takes you along. Going further and further until it’s in this beautiful place that it never could have gotten to if it obeyed the rules.

Every week we have a guest artist pick a song for 5 Songs. This week we talked to Lizz Kannenberg of Forgotten Species.

Kannenberg: My song I can’t stop listening to is “Dark Comedy Morning Show” by Open Mike Eagle. It’s a really good example of some of the more cerebral hip-hop coming out of Chicago right now. And a total surprise for me because I usually pick guitar-driven songs, but I really dig this one. I can’t get enough of the lyrics, I can’t get enough of some of the really smart references to how tough it is regardless of where you come from and how you set your life up.

I am a podcast junkie. My recent obsession has been “Mystery Show.” Each week, This American Life frequent contributor Starlee Kine solves an everyday mystery like, “How tall is Jake Gyllenhaal?” and “Why did that woman I saw 7 years ago at this intersection have a license plate that said ‘Iluv911’?”  And each show starts with this song. At first I thought it was made specifically for the show, but when I looked into it I found that it was released in 1977 by the British band Sparks. And since, I have fallen in love with the band and this song.

This song is a wonderful song. It asks the big questions, but does so in a semi-serious, semi-making-fun-of-itself kind of way. It’s big and over the top. It croons. It sounds like it could be played at a high-school dance some time ago. It’s got this incredible drum fill at the end that leads into a guitar solo that fades out as the song ends. It would be a perfect karaoke song. I’m in love.