5 Songs We Can’t Stop Listening To with Glass Animals

5 Songs We Can’t Stop Listening To with Glass Animals 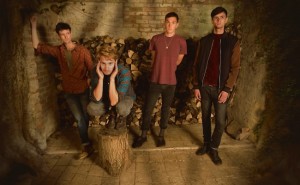 And the production is also totally next level. It’s done by Madlib, who’s a huge hip-hop producer whose produced some incredible tracks. I’m obsessed with all his production. Production that’s so simple, but so effective. Very few elements, but they all compliment themselves absolutely perfectly and make a kind of greater whole.

On the show, “30 Rock,” the main character, Liz Lemon, became a famous relationship advisor with the catchphrase “Deal Breaker.” As an advisor she called people out and she told it like it is. And it worked because her advice wasn’t vague, she told people exactly what to do. Which is what they wanted to hear.

“Call It Off” is the new “Dealbreaker” Shamir will take your call, and tell it like it is. He’ll give you his honest advice. Really, if you call 1-844-4SHAMIR, he will give you relationship advice. And if you don’t want to talk it out, dance it off to his song.

Not every moment of happiness needs to be a big one. In fact most of them aren’t. In this song Lady Lamb sings about getting on a train at the last second and the other train riders smile knowing her relief, and for a second she feels their compassion and imagines that they are family and then she sharing a weird story with them about her great aunt’s corpse being exhumed by the Vatican and recognized as a saint. It’s all right in the middle of this song.

Lady Lamb has this sense of wonder that is one of those little things that makes me happy.

The first couple of times I listened to this song, I thought, “I really like this song, but it’s unfinished. It’s not quite two minutes long, and it doesn’t really come around.

But then I was reading an interview with Kevin Parker, the mind that is Tame Impala, and he said this song is about the soft rock of AM radio in the 70’s. And it all clicked.

It’s like your turning the dial on the radio and this is the song you stop on. This is the sound that you want to hear. It’s not that it’s incomplete, it was just playing on another station before you got to it.