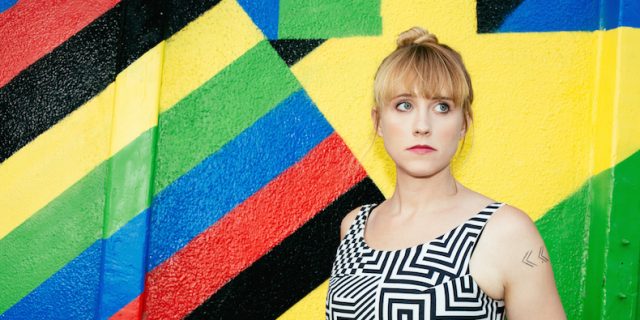 1. Flock of Dimes picks “It Can Feel So Good” by Zammuto

Every week we ask one artist that we love to tell us about a song that they love. We are here with Jenn Wasner, who is Flock of Dimes.

Jenn: It’s by Nick Zammuto from The Books, he has a solo project called Zammuto, and he has a song called “It Can Feel So Good”.

Justin: And what do you like about “It Can Feel So Good?”

Jenn: One of the things I love about this song and about him is that he has an incredible ear for the musical cadence of just regular spoken language. This song constructs a melody and a rhythmic cadence out of spoken language. He was interviewed on this Song Exploder podcast, and he spoke about the way he writes lyrics, and he talked about sitting in front of the TV in his hotel room just listening and watching until the first line presented itself, then he’d change the channel and wait for the second line of the song.

Jenn: I thought that was one of the most incredibly thoughtful and inventive ideas I had heard. People so often think they need to come up with words and look inside themselves and figure out something to say, when the reality is that music, lyrics, words, and ideas are all around us all the time and you just have to be paying attention.

2. Childish Gambino – “Me and Your Mama”

As an actor Glover has a lot to say. He’s clever. He’s funny. He’s insightful. As a musician he has been the same way. He’s got a lot to say and he’s lyrically dense. When printed off the lyrics for songs like The Longest Text Message look like a child’s Christmas lists, the page cartoonishly getting longer and longer.

But that is not the case in this song. In “Me and Your Mama” I’m not even entirely sure that there are words, that’s not what you hear. You hear Glovers’ shows raw emotion. The first two minutes build to this wrenching, squirming, cry the comes from deep down. On the past, Glover has already gotten into our head, and now he goes for the heart.

It’s been a couple weeks now since Leonard Cohen’s death, but I have been listening to his new album quite a bit. Listening to the album changed a lot after he died.

This was my favorite song off the bat. “String Reprise/Treaty” I thought it was fitting that a man who is known for being so wordy, would release a song with almost no lyrics at all. It’s like this final stroke of genius.

It’s weird. When I first heard this song, I thought it might be about his long time muse, Marianne. Then I thought it must be to god, or the above, or whatever divine entity Leonard Cohen was always wrestling with, and the first time that I listened to it after he died it felt like he was singing it to me.

Justin: Hi Makenzie, what is one song you can’t stop listening to?

Mak: I can’t stop listening to “Manhattan Island Serenade” by Leon Russell. This song specifically I discovered in a goofy way. I was covering for Marcus one day, and I went to Art Smart’s Dart Mart on Brady Street and they were listening to 88 Nine. I was like great, cool and it came up in conversation what I do, and I was like, “I actually work at 88 Nine, I’m going to be on air later, is there a song I can play for you guys and give you guys a shout out?” And one guy was like, “can you please play the song ‘Manhattan Island Serenade’ by Leon Russel?” I had never heard that one before. So I went back to the station and manually put it into our system and played it for them, and something about it stuck with me, because it starts out kind of slow, you have the rain in the background, then it picks up with this great little guitar part that kind of creeps in.

Justin: It has the rain in the background that’s sad, then it has this jumpy Randy Newman piano that’s happy.

Mak: Then there’s the guitar that you can hear once in a while that’s the bittersweet. It combines all these things that you don’t think would work together.  And also think it’s funny that the rain is consistent throughout the whole song, which I think is a trick people only use at the beginning or end of a piece, and I love it.  And with his passing it makes the song even more bittersweet right now.

In a review of The Magnetic Fields masterpiece “69 Love Songs” which, is an album that is literally 69 songs about love.  The reviewer starts by writing, “You see, I have this theory that music critics are suckers for novelty, and there isn’t much in this world that is more novel than “69 Love Songs”

This reviewer was right. Music critics are suckers for novelty. And the Magnetic Fields love novelty too. 18 years after penning 69 Love Songs, The Magnetic Fields are going to release the album that this song is going to be on. It’s called “50 Song Memoir” The premise is that, Stephin Merritt, the band’s lead singer and songwriter, has written one song for every year of his life, concluding in a 50 song album.

And while it is the height of novelty, and this song, 20”02, Be True To Your Bars” is a song written about writing songs in bars, it is not the novelty that shines through, it’s Merrit’s ability to capture a big idea and fit it into a little song, it’s his wit and his honesty, along with a pinch of novelty that proves his genius again and again.