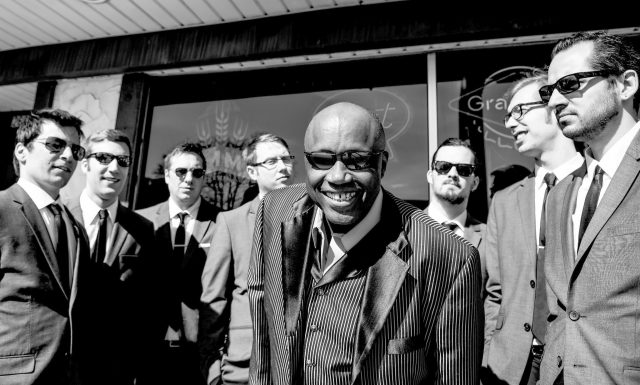 With music from Sam Cooke, The xx, Vagabon, Mura Masa, and Mrs Magician

Every week we ask one artist that we love to talk about one song that they love. This week Sonny Knight of Sonny Knight and the Lakers returns to 5 Songs We Can’t Stop Listening To.

Justin Barney: Sonny, what is one song that you can’t stop listening to?

Sonny Knight: Of all the songs in the world, I keep relating to Sam Cooke’s soul song, “A Change Is Gonna Come.”

Justin: I love that song.

Sonny Knight: I can never get that out of my head because it’s so good. And as old as the song is, it’s still fits today. Of waiting for that change they say is gonna come.

Sonny Knight:  As a child I was just amazed by him. As a kid I grew up listening to Sam Cooke sing and until the moment of his death I was hoping that I would get an opportunity to jump in. *laughs*

It’s the sound of his voice. The gospel things that he did. You know? So, yeah, it still fits today. Cause we are all waiting for that change.

Probably 5 or six years ago I was listening to an interview with James Murphy of LCD Soundsystem about the music that inspires him. And one of the bands that he picked was The Alessi Brothers. I checked them out and fell in love with them right away. Partially because they meant a lot to a musician that means a lot to me, and also largely because objectively, they are great as well.

Then, last week, The xx released this song, “Say Something Loving.” And it starts with a line from an Alessi Brothers song.

This is a magic moment in music.

I started listening to this band that I would have never heard of if it weren’t mentioned by James Murphy of LCD Soundsystem now that band holds together two of my favorite bands. It’s a link that connects the dots between LCD Soundsystem and The xx. There is a common thread. A through line. A piece of thread that connects these two bands in the tapestry of music.

These are the divine moments that holds it all together.

Why are we so concerned with other people? And pleasing other people. And making other people like us. Even when they are mean to us? And I wish that I was exempt from this. I wish I could say, we shouldn’t care about other people, or what they think. And there are plenty of times where I don’t, and I’m sure you’re the same way. BUT, somethimes we do. Sometimes we just want someone to like us, and it might make us miserable and unhappy, and it sucks, but we do it.

That’s kinda what “The Embers” by Vagabon is about.

Justin Barney: Jordan Lee, what is one song you can’t stop listening to?

Jordan Lee: Okay, this song came out I think last summer. Now, this is an artist that I’ve been digging into a lot deeper in the past few months, it’s a producer by the name of Mura Masa.

I don’t exactly know how you define this sound. Maybe its chillwave or something like that. It’s something the kids are making. It’s one of those things that gets me thinking maybe I did grow up in the wrong musical generation. Maybe I should be 17 right now. And there is something about this music that speaks to me so strongly.

This particular song, “Firefly” features NAO, who we all agree has one of the most unique voices in R&B. But this is the perfect combination of the rules of EDM build up, with none of the annoying noises.

Justin Barney: It’s got like an anti-drop. It gets you there and then instead of dropping, there is an absence.

Jordan: And there are little analogue snaps and little bits that shouldn’t be banging, but they do bang, and I’m all about that.

As I write this it is a balmy two degrees outside. I’ve gone through my ritual of tearing myself through several hours of the most depressing music that I can possibly find. My body feels like a human sandbag in my desk chair and my thoughts lay somewhere in a void between TV static and existential malaise as I try to accomplish the daunting task of just beginning to think, “What should I do this weekend?”

And I’m trying things out on bandcamp and suddenly this song comes on. “You’ll Fall In Love” by Mrs. Magician. It’s not life changing, but suddenly I feel lighter. I can physically feel my mood changing. Suddenly, I’m in a great mood. Things are great. The world is good. And, maybe, love is in the air.

I hope it boosts your mood too.