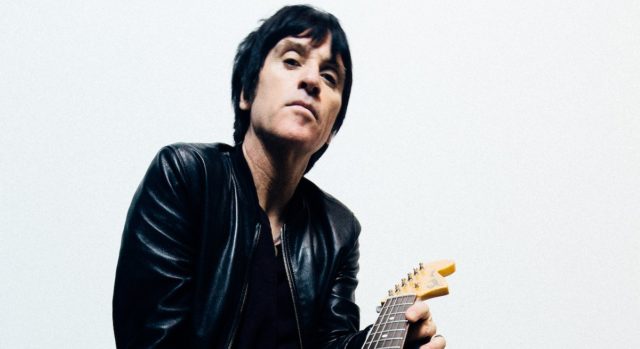 Johnny Marr could be the greatest living guitarist. He was guitarist for The Smiths. He was also in Modest Mouse and The Pretenders. He’s also had a fantastic solo career and we play a lot of his music including his most recent single, “Armatopia.” My guest today is living legend, Johnny Marr.

Johnny Marr: You know, it might surprise some people, but have you heard that song called, “Juice” by Lizzo?

Justin Barney: Oh my god! Yeah, I saw her perform it at South By it was NUTS.

Johnny Marr: Yeeeees. You know, every so often a real kind of right-across-the-board, undeniable, great, what I call “pop” record comes along.

It reminds me of, like, Outkast, “Hey Ya!” You know? You first hear “Hey Ya!” you’re like, “Whoaaaaaaa.” This really does tick a lot of the boxes. So, yeah man, that Lizzo song is great.

My guest today is Julia Jacklin. Julia Jacklin is Australian born singer who has just released the album “Crushing” and it is crushing. It is a fantastic album that is full of personal stories and also just has this really beautiful sound to go along with her voice. We’ve been playing her song “Head Alone” and I set up this interview last week because she was in New Zealand, so she is a day ahead of us, bit of a time difference and we recorded it then. My guest today is Julia Jacklin.

Justin Barney: What I want to do is learn a little bit more about you and the kind of music that you’re listening to. What is the last song that you really dove deep into and couldn’t get off your head?

Justin Barney: I love that song too! It came out and I was like, “Wow, this is something else.”

It’s just one of those songs that hit me and made me go, “Ahhh, I want to write more songs.” I haven’t felt that in a while, I’ve felt pretty, “Oh gosh, I don’t know if I ever will write a song again.” It’s very tiring and then I heard this song and I was like, “I love writing songs!”

Justin Barney: Andrew, what is one song that you can’t stop listening to?

Justin Barney: And who is Bobbie Gentry? I honestly don’t know.

Andrew Bird: Bobbie Gentry had some hits in the  mid to late ’60s. She’s an amazing guitarist and singer. She wrote “Ode to Billie Joe” which is her most famous tune. But then there’s this tune, “Chickasaw County Child” which from a song writing point of view it’s really cool how she works the syllables on it. Like it’s, “Papa won’t you let me go to town… with you. Bum bum… Feeling so down… and blue.”

It’s just a really interesting song and the production and the arrangements are just out of this world. You can tell she’s playing live. Which, of course I appreciate. She’s just playing guitar and singing and then you hear the bass, upright bass behind her. You can hear spatially what’s going on in the room and then there’s this harmonica that was pervasive in the late ’60s, early ’70s and these horn blasts that just kind of pop out of nowhere.

It’s just something that you could not possibly ever recreate and I’m kind of into that.

Justin Barney: I love that. Um, what’s the song about?

Andrew Bird: It’s just her, I think she grew up in um rural Mississippi. It’s her as a child begging her father to take her to town and all the things that she would get him to buy her.

Our guest today is Mike Kinsella, lead singer of American Football. American Football is band that was formed in Urbana, Ill., in 1997. In 1999, they released their self-titled album which has become a cult classic. It was kind of responsible for starting the genre of emo. It was right at the beginning there and they have continued to be extremely important artist, not only in the genre but in music at large.

Justin Barney: Mike, what’s one song you have been listening to a lot recently?

Mike Kinsella: The band Land of Talk who, Elizabeth sings on one of the songs on the new record, what’s it called … [laughs] Oh yeah, “Its Okay” is the song that I find myself going back to every couple of weeks sort of like whenever I have alone time and I’m not sort of, doing chores around the house or something and I have time to reflect, it’s my go-to song.

Justin Barney: What do you like about the structure of the song or how it sounds?

Mike Kinsella: It sounds like it was painful to record even, like her voice on it.. There’s a moment, it’s just a couple bars on the song, you just hear her exhale, sort of in like.. Ahh it’s unbelievable, it’s crushing. It’s like you put mics in front of her and somebody is gonna make you document this thing you don’t even want to sing about. That’s how much it hurts. Yeah, it’s incredible.

Our guest today is Sharon Van Etten. She is a singer from New Jersey who’s just released this incredible string of albums: “Tramp” in 2012, “Are We There” in 2014 and her new album “Remind Me Tomorrow” is out now on Jagjaguwar. We’ve been playing her song “Comeback Kid” on 88Nine.