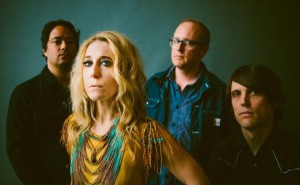 “5 Songs We Can’t Stop Listening To” is our passion project. These are the albums we are buying at record stores and the songs we are jamming to in the shower.

Every week we ask at least one artist we love to tell us about a song that they love. This week we have two guests. Heartless Bastards talked to us as they prepared for this Sunday’s show at Turner Hall, and Fantastic Negrito called us from his home in Oakland, California.

Also on the list: the whole office has been JAMMING to the new Big Grams collaboration and laughing along with Fidlar’s jokes. This week, Riot grrrl innovators and leaders of feminist rock, Bikini Kill, get a re-issue of their very first album on digital, CD, and vinyl for the first time and we couldn’t resist talking about such an important band. Give it a look, give it a listen.

1. Heartless Bastards pick “Woman at the Well” by Israel Nash

Every week we ask an artist that we love to tell us about one song that they can’t stop listening to. This week we talked to Erika Wennerstrom of Heartless Bastards.

Erika Wennerstrom: I lately have been pretty obsessed with “Women at the well” by Israel Nash. His voice on the song reminds me kind of a Roy Orbison a little bit but I can totally see The Traveling Wilburys musically. It reminds me of that vibe like Roy Orbison singing and then the rest of the album reminds me of Neil Young quite a bit so his voice sounds a little different on this song in particular but yeah I’m pretty obsessed with that song.

The Heartless Bastards are playing in Milwaukee THIS SUNDAY. They will be at Turner Hall Ballroom. You can get tickets here.

I love this song. It’s straight-forward rock ‘n’ roll, and I’m that kind of guy. But, it’s also got a lot going on. It’s constantly changing what it’s doing. My favorite part is this little musical joke it has in the middle. It’s musical self-deprecation.

The whole time Fidlar’s lead singer, Zac Carper, sings about being broke, being lonely, feeling he could do better. And as he’s singing he kinds of wines them. Like he doesn’t feel that his emotions are valid. And as he wines about being lonely by singing “everybody’s got somebody, everybody but me” the music behind him changes to this little plunking toy piano that makes him sound like a little kid crying over spilled milk.

This week we’ve got two artists talking about the songs they love. We sat down with Fantastic Negrito and talked about the blues. This is what he had to say when we asked him what he is listening to.

Fantastic Negrito: Oh, Robert Johnson, I don’t know “Preaching Blues”. Damn it’s crazy, it almost sounds like afro rhythm. It sounds African almost to me. That influenced the hell out of me, in terms of just rhythm and trying to play on the guitar, it’s so primitive. I’m a little bit obsessed with him. I guess it’s not a bad obsession. It’s unbelievable and when I heard him as a youngster through my elders I completely didn’t understand it and it’s like I don’t know what this is this sucks.

Justin Barney: Do you remember when that clicked?

Listen to our full interview with Fantastic Negrito right here

Bikini Kill’s very first demo, “Revolution Girl Style Now”, is being issued digitally, and on CD, and vinyl for the very first time this week.

Bikini Kill was a feminist rock band in the 90’s. Along with a couple of other bands they started the feminist youth movement known as Riot Grrrl. The Riot Grrl movement changed attitudes about who could be on stage. They were loud, their shows were wild, they sang about being marginalized by society, desire, equality, acceptance, sex.  Their impetus was, “If guys can do it, why can’t we?”

For Pitchfork Senior Editor, author, and music critic Jessica Hopper, discovering Bikini Kill amongst the male dominated grunge scene as a teenager in the 1990’s was a revolution. She said that, “Bikini Kill songs taught her that her teen-girl soul mattered. That who she was mattered, what she thought and what she felt mattered, even when they were invisible to everyone else.”

As movements do, Riot-grrrl moved on, but it’s legacy is not was not the end result, it was the catalyst for current bands like Bully, Alvvys, Girl Pool, Colleen Green, Ex Hex, and many many more.

If you are feeling like you don’t matter, or that your thoughts and feelings are invisible to every else, check out Bikini Kill.

Big Grams is a new collaborative project between Big Boi and Phantogram.

You might know Big Boi from this little group he was in called Outkast. Where Big Boi played the yin to Andre 3000’s yang. Outkast was a balancing act between Andre 3000’s highs and Big Boi’s lows. He played the straight man, keeping the group grounded with his steady flow. And that is just what he does in this song.

The other half of the group is Sarah Barthel of Phantogram. Her songs can be big, beautiful and cinematic. And that is just what she brings in this song.

Together, they are a great team. This is two great artists, playing to each others strengths, and making one perfect song.