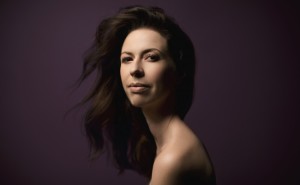 Joy Williams: Lately I’ve fallen in love with the Jamie xx record, Jamie obviously from the band The XX, and they had a record that just came out with this song called “Loud Places,” which has been a total ear worm for me. It’s been on repeat in our house a lot. We’ve had several dance parties in the kitchen to the song. I just love it! I love the feel, the vibe is great, it just makes me want to put it on repeat, and I love the lyrics, ‘I’ve been to a lot of places to search for someone to be quiet with.’ It’s so great.

It puts me in all the right kinds of moods that I need to be in. It’s the perfect song to play in several scenarios. You could be cooking dinner and it would feel like the right mood, you could be riding a bike you know, in Venice Beach and it feels like the right mood. But there’s also a beat that just makes me wanna move and that’s what I used as a barometer when I was creating the sound for my own record and if it locks in with my body then I knew I was doing something good.

In college I had no idea what I was doing. I didn’t know what I was going to major in. I didn’t declare my history and poli-sci majors until my junior year. I didn’t really have a clear goals in college, other than get some imaginary job, in an imaginary field, that would magically appear when I had a diploma.

My parents, who are very loving people, but very stern, told me, “Your not going to get lucky.  You need to have a plan.” And I fought them. I told them that I didn’t need a plan. I wanted them to support my decisions, or lack there of regardless of what they were.

And despite how much I don’t want to admit it. Sometimes I need that tough love. I need someone to just tell it to me straight. So I can see the things I don’t want to see, and become a better person.

This song is like my parents in college. This song gives you some tough love.

I don’t really know why distortion is appealing. It doesn’t make sense. Because you are taking something that is of high audio quality and then distorting it so that it is of lower audio quality. I don’t know why, but I love it every time.

This song has a lot of it. Without the distortion it might sound like a bubble gum pop song or 90’s power pop, but the feedback, distortion, and reverb kind of blend everything together, simultaneously making everything a little more complicated and kind of simpler at the same time.

The audio quality is not perfect, but I think that’s part of the appeal. Nothing’s perfect.

Ish Darr is an 18 year old kid in Milwuakee.

But unlike most 18 year olds in this city Ish Darr has been written about in Complex Magazine, sent on flights by Atlantic Records, worked with grammy award winning producers, and is playing an upcoming show in Copenhagen.

Whenever I hear about a success story in Milwaukee I think, ‘How did that happen?’

First off, Ish Darr has talent. He’s very talented. You’ll hear it in this song. It’s the most difficult quality to have, but he’s got it. Talent.

But all the talent in the world is worthless if you can’t use it. Ish Darr started rapping in high-school, and actually in his high school, he went to Mesmer and he used the school’s recording studio. So he had access. And he had encouragement. He said he was going to stop making music in high school, but he was pulled aside by a music teacher who encouraged him to keep going.

And of course, he has talent. Just listen to it in this song.

This week we have two picks from artists that we love. The first was from Joy Williams, and this pick is from Kopecky.

Gabe Simon: Man, I’ll be totally honest with you, that Weeknd song, “I Can’t Feel My Face” is just, I know it’s getting played like crazy, but it is really good. It’s super nostalgic. It’s kinda got this MJ vibe where it’s really clean and simple. Have you ever listened to this worktape that came out a couple years ago that showed the demo that Michael Jackson did of “Billy Jean?” It was like him doing mouth noises, for the bass guitar and BGVs, it was one of those startlingly awesome things to listen to and realize how talented somebody is.

That song, “I Can’t Feel My Face” when the background vocals come in, you just feel them coming in [sings back ground vocals]. It is so fun to hear these back ground sounds. [sings] I just love it. It’s just so Boyz II Men, it’s super cool. Every time it comes on the radio I just want to crank it up. It makes me fall in love with music again every day.