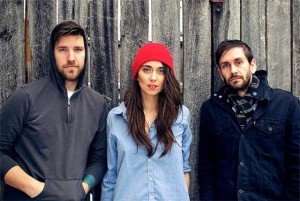 This internet is a big place. There is so much music released every day. This column tries to make that world a little smaller by telling you what we love. We listen to it all, the good, the bad, and the just plain boring. Then we listen to it again. And again. Then we tell you which ones we really love. These are those gems. These are 5 Songs We Can’t Stop Listening To.

There is this tendency, especially in pop music, to portray the artist as a doll. Perfectly proportioned, delicate, flawless. Sometimes it’s played up to the point of fantasy. Like Britney Spears in “Oops I Did It Again” or Madonna at various stages. But this song is like a Madonna song flipped on its head. It inverts the meaning. When FKA Twigs sings “I’m Your Doll” there is something haunting about it. It’s dark, and it shows the doll fantasy for what it really is: just objectification.

(The individual track does not exist online. Listen to the podcast above at around the 3:20 mark.)

Brian Stella, lead singer of the Front Bottoms, does not have a good voice. But that’s not a bad thing. He’s got a voice you just want to sing along with. You hear him yelling the words in a really accessible register, and you’re like, “Yeah, I can do that.” And then you want to sing along. It’s easier to hear what he is saying because he is closer to talking than singing. And that makes you remember the lyrics and want to sing along even more.

By the time you get to the second chorus, you’re already going to know the words and have the range to start singing along with the metaphors about getting older. You will find yourself shouting along with  the line “Ladies and gentlemen the DJ just threw up on the dancefloor. The party is over. It’s time to go.”

3. On an On picks Jarvis Cocker – “Black Magic”

Each week we ask an artist that we love to tell us about a song that they love. This week we talked to Alissa Ricci of the group On an On.  (The group played a live session at 88Nine.)

“I grew up listening to a lot of oldies, like around the house my mom would always have them on. ‘Crimson and Clover’ was one of my first, as a kid just being like. ‘Woah!’ Like the ending just blew my mind sonically. That song ‘Black Magic,’ by Jarvis has a similar vibe. It has this throwback feel. He’s an artist that is kind of contemporary that can embody this old school 60’s, 70’s golden era that I just am so sad I didn’t live in! Now, to do something like that, it’s hard for people to embody that genuinely because it’s so derivative or whatever. And I feel like this sound with the tubular bells and all this stuff and the background vocals, it’s just contemporary and yet genuinely embracing and celebrating that era. And then the background vocals are totally like ‘Crimson and Clover’ kind of vibes.”

I had heard of Deerhunter before 2013. The name was floating around, but I never really dove into their music until I turned on a late night TV show some time that spring.  I saw a tall gangly man in a black wig starting to play a song, with two fingers on his hand that were bandaged, and you could see blood seeping out through the gauze. I couldn’t look away. The song devolved and splintered and it ended with this tall gangly guy with the mangled hand staggering off stage as the band played on. I was hooked. It was a rock ‘n’ roll moment. And I’ve been a fan since.

This is a new Deerhunter song. It’s got attitude.  It’s got confidence. It’s glam. You can feel the stage presence of lead singer, the brilliant, Bradford Cox.

5. The Dead Weather – “I Feel Love (Every Million Miles)”

The Dead Weather is a true supergroup. A lot of the time the term “supergroup” is used for any band with members who play in other bands, but the Dead Weather has members from Queens of the Stone Age, City & Color, The Kills and, oh yeah, Jack White.

And the influence of Jack White’s last album, “Lazaretto,” is heavy on this song. Each instrument is strong and distinct. About halfway through the song the whole thing slows down to a trudge and they just rock.