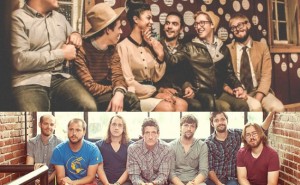 Every week we have a guest artist come on and tell us about one song that they can’t stop listening to. This week we have Monica Martin, lead singer of Phox.

Monica Martin: So the one song that I cannot stop listening to right now is the last song on the Shakey Graves record. It’s called “Call It Heaven.” I love Esme Patterson, and I think Alejandro [the lead singer] is a doll.

Justin Barney: You are such a sap. You picked him last time.

Justin Barney: “But guess what happened last time I talked to him about this? I talked to Alejandro and I asked him this question, and I said, ‘Last time we had Phox in and they picked you for their song.’ And he was freaking out about you freaking out.”

Monica Martin: “Okay, well you know that we just sang together at Summerfest.”

Justin Barney: “Yeah, I was there.”

In Greek mythology the sirens were beautiful creatures who caused shipwrecks by luring in sailors with their beautiful voices.  In the story “The Odyssey,” their appeal is so strong that Odysseus binds himself to the mast so he can’t be lured in to steer the ship into their shore. As his ship passes, they say “No one ever sailed past them without staying to hear the enchanting sweetness of their song, and he who listens will go on his way not only charmed, but wiser, for they know all the ills that they gods laid upon the earth and can tell you everything that is going to happen over the whole world.”

With the sirens, people were lured in by the beauty of their voices, but the reason they couldn’t turn away was because of the wisdom and the knowledge that the sirens shared.

I feel that same is true for this one. This is Siren. Hear her song.

Son Lux’s brain man, Ryan Lott, has released several albums as Sun Lux. He also has done the score for several films. That makes total sense because “Change Is Everything” sounds like a soundtrack to a movie that you are living in real time.

It’s like everything that you are doing right now — even just sitting at your desk or driving your car — is in slow motion. Then you get to this part of the song (cue up BUM BUM BUM BUM BUM) … and your world explodes into particles of light and dark. Everything breaks up into atoms just floating. The world pauses. It’s a total escape.

And sometimes, when our lives don’t feel as glamourous or exciting as the movies we watch, it’s nice to listen to a song like this. And for three minutes, your life is a movie.

4. Fantastic Negrito – “Lost In A Crowd”

Fantastic Negrito is a rags to riches story. Plucked from obscurity. He’s been a musician for 20 plus years. In the 90’s he signed a bum record deal that hurt him more than helped. Then, tragically, he was in a car accident that left him in a coma for three weeks. He had surgery that left him with rods and pins through his body, and spent months and months recovering.

But out of the darkness comes light.

Last year, NPR had a contest to give an undiscovered artist a chance to play in its office, and give him or her a shot at real success. Seven thousand contestants entered. Fantastic Negrito won.

This song bears the pain of his dark times, but in the blues music tradition, he stares into that darkness and finds beauty.

5. The Revivalists pick Frank Sinatra — “It Was A Very Good Year”

This week David Shaw of The Revivalists told us about one song he can’t stop listening to.

David Shaw: “Actually it’s kinda weird, I’ve been listening to a lot of Frank Sinatra. (Laughs) It’s a song called, ‘It Was A Very Good Year.’  You know this just by listening, but he has perfect pitch. Not all singers have that. So, he’s got this loooow baritone. He has that talkie sound, but it also has that pitch to it, where you’re like, ‘Oh, that sounds really sweet. How is he tickling my ear drum like that?’

“I just really love the way it takes you back to when you were 17, when you were two. It just speaks to me in ways that a song is supposed to think of you. It’s that warm cup of coffee in the morning. It’s cool.”