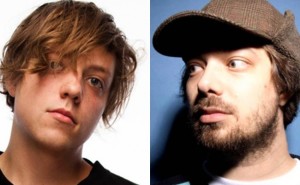 Robert DeLong: “Flume’s ‘Stay Close’ is one that I’ve been listening to a lot lately. Pretty cool electronic music out of Australia. You know, the thing about Flume that is most interesting to me is that it’s electronic, EDM sounds almost, but the grooves are so loose. It sounds like it is performed, in a way, by like a young robot that’s having problems trying to learn the drums or something. I love it for that reason.

And besides that, it’s nice and emotive with very cool sounds. So, for me, that’s as much as you can ask for out of electronic music.”

Soul Low started as a couple of high school kids trying to lean how to play some instruments in Milwaukee. Their first gig was in the Pius High School cafeteria in 2009. They went to the University of Wisconsin-Milwaukee, released a handful of EPs and now these guys are really on their way. I think they’re really onto something. They’ve got a knack for melody and feeling, and every song has that thing — that intangible thing — that just gets to me. Like this song.

It’s about finding the perfect companion. And it starts in that way that an idea pops into your head for the first time and you’re like, “Yeah, that would be nice if I had that thing.” And then it builds up. That want becomes a need, and the longer you live without this thing the more it builds and builds, until it’s mania. And that initial “it would be nice” becomes you pulling your hair out, running around in your pajamas in broad daylight, screaming, “I NEED THIS THING!” Yeah, that’s what this song is like.

So I heard this song premier on Beats 1 radio, Apple’s new streaming service, on the day of its launch. DJ Zane Lowe played it and I immediately fell in love with it. But then I had this thought, this thought that went, ‘Am I liking this just because some guy said I should like it? Or do I like it because, objectively, it is a great song?’

And I think the answer is a little bit of both.

And I think because I was open to accepting it, I was able to see how this song stands on its own. It’s really fantastic. Gallant seems to pull back and lean into every syllable, making each word feel like a blow to the chest. And the range and pitch of his voice pair so perfectly with the deep bass. And I don’t think it matters why I like it. I like it. And I think you will too.

The summer can wear you out. Between Summerfest, Germanfest, Polishfest, all the fests, block parties every weekend, your neighbors grilling out — who knew trying to relax could be so stressful?

This is where Beach House comes in. For me, this band has always provided a warm place to clear my mind and settle down. And that is just what this song does. Its layers are like blankets. Listening to this song is true comfort.  This will really relieve your stress.

Aesop Rock: I’ve been listening to ‘Trunk Rattle’ by Vince Staples. I know that Vince Staples has a new record that’s streaming, but I haven’t even gotten to that. This is an older one. I like him.

I think he like, kind of embodies something that hasn’t been around in a minute in rap. He sounds like the new Snoop Dog or something to me. Like, real styled out, west coast stuff. He’s the complete package kinda. He’s not just a lyrical guy, or like all vibe with no writing, he just kinda has it. I don’t really know what it is, it’s just kind of that ‘X factor’ thing that pushes an artist over to the next level. He’s the only guy in years that has brought that to the table for me.

Maybe not the only guy, but one of the few people that I’ve been like, This guy has something that has something greater than the sum of the parts of what he actually is.’ And he comes together for me. And I love the beat. The beat is like my favorite beat in years.