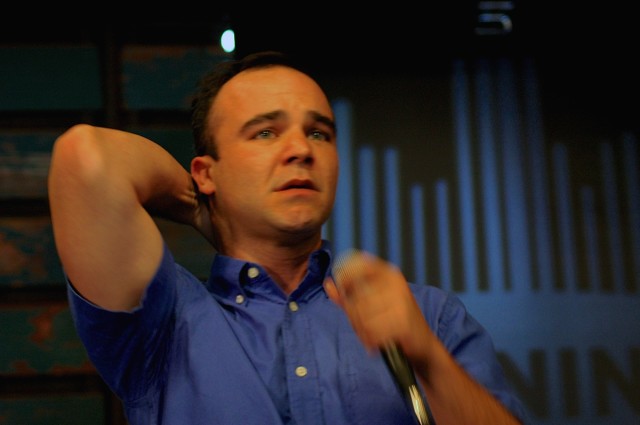 Samuel Herring of Future Islands told me that he smoked his first cigarette at 10 years old when one of his dad’s unfiltered Marbs fell out of his pocket in the hallway. Sam played sick the next day so he could stay home and smoke it. After his parents left he lit a kitchen match and stood in him and his brother’s shared bathroom. He coughed his lungs out. He felt sick. He flushed it down the toilet. The next week he stole one out of his dad’s pack and he did the whole thing again.

I’m not sure how this relates to the music today, maybe, if I can stretch on a metaphor, I can say that sometimes songs are like that cigarette. Sometimes a song will make you sick, or you know that it’s going to hurt you, but you do it anyway and it makes you feel good, even if it’s just for a little while. And maybe they are not, and I just wanted to tell that story.

I met Future Island’s front man in our parking lot. He stopped me at the 50 yard line of our 100 foot parking lot, looked me directly in the eye, shook my hand with a firmness that my father would respect, and with a cigarette dangling from the corner of his mouth he bellowed in a voice that seemed almost sub-audible, “Hi, my name is Samuel.”  It was almost cartoonishly masculine, but it didn’t come off as if he was putting it on, it felt warm and honest. In our conversation I felt like I was talking to an old friend. It was no surprise to me that the song that he picked is one of my all-time favorites as well. You can listen to his beautiful bellow in the SoundCloud link above.

Listen if you like: Townes Van Zandt, The Anthology of American Folk Music, Missippi John Hurt.

Musicologist Craig Werner says that there are three musical “impulses” that give music its power. They are the Gospel impulse, the Jazz Impulse, and the Blues Impulse. Gospel Impulse holds a belief that life’s burden can be transformed into hope and redemption. Blues impulse fingers the jagged grain of brutal existence. And it has the jazz impulse seeks to redefine itself. Some songs don’t have any of these impulses, this song has all three.

3. Fat White Family- “Is It Raining In Your Mouth?”

The key to this song is its forward momentum. It’s propulsion. It doesn’t jump out of the gate, but rather it chugs at the starting line, (beer I presume). And about midway through its momentum really start gathering. Most likely propelled by Schlitz or some other type of stale ale, the song doesn’t sprint, but rather drunkenly stumbles, moving faster and faster as its feet try to keep in front if its slumping, top-heavy torso as it falls forward forward forward forward forward until it gets to its destination. And crashes.

I remember going to Six Flags  Great America when I was 6 years old. The Viper was the new ride. My favorite ride up till then had been the Wizzer, But, at 6 year old I was over it. “That ride is for four year olds,” I told my mother. My twin brother didn’t look as confident, there was concern in his eyes. “Maybe we should try that ride next year.” he suggested. I didn’t have that. I was going on the Viper this year. I was going now. “We are going on it now.” I said. So we got in line. We got buckled in. And the ride started taking us up the big hill. Clink Clink Clink. At this point, the whole ride is silent in anticipation. But I heard something behind me. I looked back and I saw my brother, tears were streaming down his cheeks. I never felt so bad. When the ride ended we got off an my stomach was churning from guilt. I turned to him to apologize for making him go on the ride, but before I could say anything, eyes still wet with tears he said, “Justin, Lets go on it again.”

This song is about getting on life’s ride, even when you know that it might be scary.

Listen if you like: female vocals with and interesting mixer effect in the chorus, Tune-yards, Thao and the Get Down Stay Down.

Foxygen seems to be able to include just about every element of America’s musical past without sounding like they are mimicking any part of it. In this song you can hear piano from Elton John, breathy vocals from a 70’s California beach bands, a Motown brass section, a glam attitude, bluesy lyrics, and psychadelic vibe from the whole thing. And although they are many things at once, they are never imitation, they are never a cheap throwback to a false nostalgia, they bring new life to these old sounds, and they are always uniquely Foxygen.

Foxygen’s new album, …And Star Power, will be available on October 14.

Listen if you like: the ‘60s, rock piano, the flower child of glam rock and psych.