5 Songs We Can’t Stop Listening To with Sylvan Esso

5 Songs We Can’t Stop Listening To with Sylvan Esso 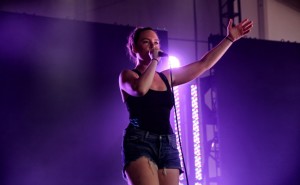 Justin Barney: One last question, what is the meaning of life?

Father John Misty: [laughs] I’m actually going to answer this question. I definitely don’t think it’s the search for meaning. The most unfulfilled people I know are addicted to some sort of search for meaning. And I really think that there is no meaning. There is no innate meaning to life. It’s every human’s mandate to create meaning for themselves. I think that’s the function of meaning of and love and those things that don’t really exist unless you create them. Like, humans, we have these massive grotesque brains that are so big that we create meaning, but we are still so dumb that we can’t realize that we made it ourselves.

If we are manufacturing the meaning in our lives, some things that give my life meaning are listless existential defeatism, and overwrought glam songs. This song is both.

It’s on the whole team lately.

Every week we ask an artist to tell us about one song that they can’t stop listening to. This week we asked Amelia Meath of the group Sylvan Esso.

Amelia Meath: I can’t stop listening to “Hood Politics” off the Kendrick Lamar record right now. It’s so good — just the beat structure, and the idea of using the word ‘boo-boo’ over and over again, it’s so fulfilling. It doesn’t necessarily mean anything but by using it he infuses all this meaning. And also that verse, where he starts tripping over himself ‘get up what up I heard they opened up Pandora’s box’ like that, it’s like, AGHH! [cute Amelia scream]. And It’s right after he talks about how he’s owning so hard right now, and then he just slams everyone’s faces in the dirt with it, being like: ‘Yeah, I’m the best rapper. Have you noticed?’ It’s so good.”

This is a song about faded legacies. It is a reminder that our lives here are short. And we spend a lot of time trying to make something that will last, but will ultimately be reduced, or completely forgotten.

And it’s told beautifully, using specific examples in the city of Manhattan. The song’s title, “Sapokanikan,” is a Native American word. Manhattan’s first empire. Reduced to a footnote. The first legacy to fade. Joanna Newsom moves on to talk about a mass grave under the Washington Square Arch. The inhabitants’ bodies, lives, and stories are forgotten. And John Purroy Mitchel, “The Boy Mayor of New York” who fought the political machinery of Tammany Hall, and whose tributes now rust in the park.

Honestly, researching this song was absolutely fascinating. It was like an archaeological dig in a song.

Ultimately the song deals with Newsom’s own mortality, the fact her life will be reduced to lines in print, and grappling with the truth that all memories fade.

In this song the lead singer, Devon Welsh, expresses that he is at peace with death because he is happy and in love. I am a sappy sentimental ball of mush, so I love a song like this. He is bearing his heart and telling this person how much he loves them and doesn’t wish to grow old.  Instead he tells them that he wants to kiss them in a car that’s crashing and they would both die laughing because there would be nothing left to do. It could come off as a bit too much, but it is balanced so well musically.

Instrumentally it sounds like a last second moment frozen in time. The car is crashing and he is looking into his loved ones eyes, and even though it’s all happening in the blink of an eye, he is thinking of all of this in that one last moment.