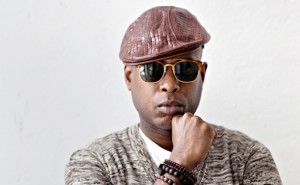 Every week we invite at least one artist to tell us about one song that they can’t stop listening to. Talib Kweli picked Gil Scott-Heron’s “Your Daddy Loves You.” This is what he had to say about the song. You can hear him talk about it and hear the song itself in the Mixcloud link at the top of this post.

Talib Kweli: One song I can’t stop listening to is “Your Daddy Loves His Girl,” by Gil Scott Heron. It’s a very powerful song. I have a daughter but I don’t think you need to have a daughter to understand, you know, a parent talking to a daughter and his thoughts while she’s sleeping, and dealing with the problems in a relationship with the other half, or the spouse.

Also Gil Scott, just the way that he sings — the raw emotion, the lack of pretense and the lack of studio magic that you hear in his songs — is something that is just very simple, basic song that is very short so you want to play it again. That’s it, it’s just a great piece of work.

The other day I was riding my bike into work, listening to an album I felt like I was supposed to really like, and I was liking it, but wasn’t emotionally connecting to it. And I had this moment where I was like, “Oh my God, has it happened? Has listening to music full time made me numb?” I was having a real existential crisis. And then I got into work, still a little bummed, and saw that a new song was released from Mac Demarco, so I put it on.  This song started playing and a wave of relief hit me.

I just love Mac Demarco. He is funny and easy going. And in this song he is real tender. He calls himself a loverboy, which I love. And it’s just so sweet. I love it.

I talked to the lead singer of Kopecky the other day and he was saying that a song made him fall in love with music all over again. I felt like that happened with this song.

Wilco has been making music for 20 years. They haven’t gained their cult following or critical acclaim by resting on their laurels. The group rose out of the broken pieces of Uncle Tupelo, and came out of the gate in 1995 with the release alt-country jangler, “A.M.”

In 2002, they left alt-country behind. They transcended and released one of those albums which comes around once in a great while. It will get 10- and 20-year re-releases and accolades galore. It’s one of those records that keeps independent record stores going because everyone should to own at least one copy of Wilco’s masterpiece, “Yankee Hotel Foxtrot.”

This album certainly isn’t for everyone.  But you certainly can’t say Wilco is mailing it in or going through the motions. This is a new direction from Wilco, and I like it.

4. Madlib and Sam Herring (of Future Islands) – “Trouble Knows Me”

Madlib samples music. I think that people that sample music get a bad rap. Sometimes people think that using six notes that were already pressed on a record is cheating. In this song, Madlib uses this horn sample throughout the song. No, he did not write the arrangement. But what he does with it is equally difficult.

Those samples don’t just appear. Madlib is a music researcher. Like a grad student huddled in the stacks writing a term paper, Madlib has his own stacks — his record collection. He has too many to actually count. So he counts by the pound. His current estimate: 8,000 lbs. of vinyl. And every day Madlib locks himself in those stacks and listens to album after album, researching, digging for that one piece. Madlib finding that nine-note horn sample is like finding a needle in an 8,000 lb. haystack. And it takes a lot of needles to stitch together just one song.

For the trumpeter, the notes are there on the instrument. For Madlib, he’s gotta go find them.

The Helio Sequence’s lead-singer, Brandon Summers, tells us one song he can’t stop listening to.

Brandon Summers: Lately, its been listening a lot to a song called “Valley Of Tears” by a band called Pure X out of Austin. I was just in a café and it happened to be playing and it caught my ear and I was like, ‘Wow, what is this? This is really cool.’  I really started to love the whole record and kind of kept coming back to this song and it just kind of grew from there.

I think it has a lot to do with the mood. I find, definitely musically, a sympathy with the aesthetic that they have, that’s really this kind of laid back summer vibe. When you get into the song, even though it has this laid back easy vibe, there’s a lot of depth going on in the lyrics. It is talking about love, and the grandiose images of a valley of tears, and making a connection with someone. It functions on a lot of levels.

I went on a vacation with my family and that album, that song, was the soundtrack to this vacation we made out to the desert in Eastern Oregon. And then I kind of took it with me on tour. It just kind of has become a part of life, lately. I associate it with a climate, a feel, and the memories of visiting painted hills. There’s a definite emotional connection.