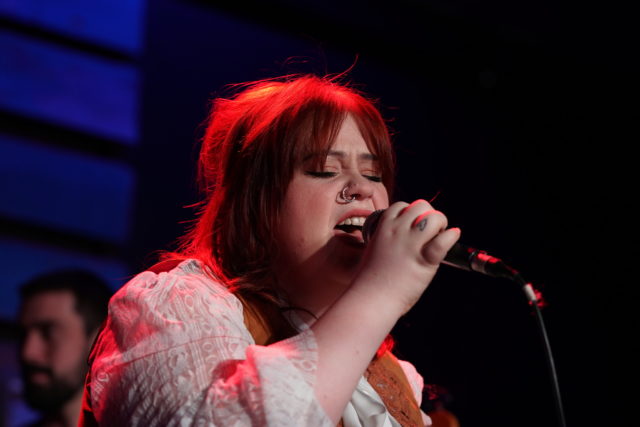 Abby, what is the last song you couldn’t stop listening to?

Why this song? What stands out to you about “Move On Up”?

Well Curtis Mayfield in general is a genius. But also, just the feeling that it makes you feel, which is very good. It’s like an extremely positive song. There’s like, this makes me feel good. “Move On Up” is like all day, nonstop, having a great time. And, yeah, it just makes you feel really good. And on top of that, I mean the instrumental itself is really good. Even when people aren’t singing. There’s a slew of instrumentation going on. He uses like six different drums and you know so many instruments that meld together like a kaleidoscope of positivity. And that would be “Move On Up.”

Do you use music like that, to make you feel better? Do you listen to that and you’re like, I need to feel better and I’m going to listen to this song? And then do you feel the difference?

Oh definitely. I mean I could listen to the song on any given day, but I actually have had specific moments in my life where I’ve played that song to feel good. I mean the message itself, just in the lyrics, is positive. But then on top of it, it’s got this, like, if you had to assign an aura to that song, it would be like orange and yellow and bright. It’s very bright sounding and bright feeling, so yeah, definitely.

Do you think that was like such a particular time, what makes that sound? What creates that? It’s not just the time, but it’s like the microphones and the pedal and the instrument.

Right, I mean it’s interesting because every instrumentalist, or every musician in general, has their own tweaking things that you can’t recreate. So there is kind of this overlap of tone when you associate with a time period. Which might be something as simple as recording on tape, but this is something I talk about a lot with producers and friends who are musicians. It’s always the question. How do I get that? How do I get that? When really in actuality it’s the artist themselves who are tweaking certain things. So if they have a pedal, that is very specifically tweaked to their sound. You know?

So I couldn’t say there was just some master button that says, “now you sound like you’re playing the seventies.” There is no master sound. It’s very catered to the artist themselves.

For a Curtis Mayfield, for that song, how do you create that “we’re feeling good” sound? What is that? What is it in the song?

I don’t know, that the thing! That’s why I can’t stop listening to it. I’m still trying to figure it out.

Abby will be playing at Turner Hall Ballroom on Feb 7.