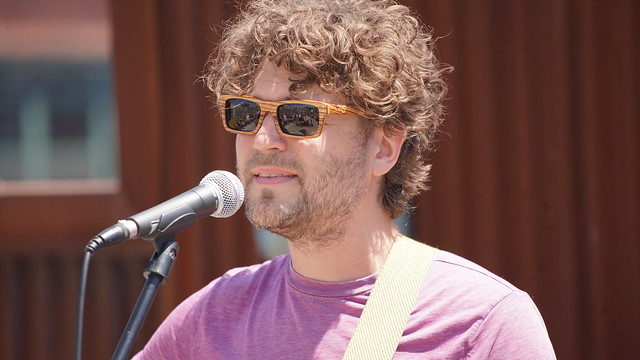 Ra Ra Riot was formed in Syracuse, New York. I think of them as indie-rock royalty, and they are near and dear to our hearts. One of their recent songs was in the movie “Booksmart,” and one of the members lived in Milwaukee for a bit. They have a new album, “Superbloom,” which will be out in August. I am talking to lead singer Wes Miles.

Justin Barney: What would be the last song that you couldn’t stop listening to?

Wes Miles: The last song I was just obsessed with and couldn’t stop listening to, even in my sleep it would just be playing, was “I’ll Keep it With Mine.” It’s a Fairport Convention cover of a Bob Dylan song. I think Sandy Denny has one of the best voices in all of music history. Talk about vulnerable. There is so much dynamic within the music and the vocals, it’s incredible. Of course, Bob Dylan having written it, the lyrics are amazing, and Fairport Convention is an awesome band. That’s the last really difficult song for me to not listen to.

Justin Barney: I like Bob Dylan covers because someone gets a crack at a song that is really well written.

Wes Miles: That’s a good way to put it.

Justin Barney: How did you discover that song?

Wes Miles: We just did a tour in Mexico and we were working out some covers to do. We would meet every Wednesday night and everyone would bring a cover, and it was just a fun, different thing to do. I was like, “Hey, I know this song, I’ve always wanted to sing this song,” and so we did that. There is no recording of it but it’s just so fun to sing that song and learn stuff like that.

This song starts off with the lead singer, Florist, just talking over music. I think that’s one of the reasons why I like music a lot: listening to music is a chance to listen to someone else. In this song, I really like the way that Florist presents it. It is very personal and quiet and close. In the background there are all of these bird sounds, and it’s very pleasant. It sounds like you’re sitting outside with Florist, and she’s got her guitar there and she’s just talking to you.

Alex Lahey was born in Melbourne, Australia in 1992. She has released two albums so far, “I Love You Like A Brother,” in 2017, from which we played the song “Every Day’s the Weekend,” and this year’s “The Best of Luck Club,” from which we are playing “Don’t Be So Hard on Yourself” right now. She writes anthems, and they’re great.

Justin Barney: Alex, what is the last song that you couldn’t stop listening to?

Alex Lahey: I think it would be “Falling Apart” by Emma Louise.

Justin Barney: Who is she?

Alex Lahey: She is an artist from Cairns, in Australia, and she’s based in Los Angeles now. She released this record last year called “Lilac Everything,” and the record has these incredible songs and arrangements on it. The thing about it that makes it really different is that the whole record is pitch shifted down four semitones, so her voice doesn’t sound like her. She kind of sounds like a man, or there are more male characteristics. It’s interesting and it’s not something you notice as immediately as you would think. Further to that, it’s astounding how emotive just that change makes you feel and how emotive it makes the song just because of that pitch shift, which is really weird. You wouldn’t think it would make you feel the song in a different way, but it does.

Justin Barney: Why do you think that she pitch shifted down?

Alex Lahey: I don’t know Emma well enough to say. I’ve met Emma briefly before and she’s super funny with a great sense of humor. A part of me is like, I wonder if they just did this for fun, as a joke. Then I’m like, actually, this is really cool and different. I feel like it would have been a happy accident as opposed to, “Let’s do something really different that’s never been done before and really impress people and make them ask questions.” It would have been more of an organic thing for how they got to that. The only way I could possibly think about it was that they were doing it for a joke and then stuck with it. It’s the only way I would have thought to have done it.

Elle Davidson: I can not stop listening to “Good Summer” by Kate Nash.

Justin Barney: How did this song come to you?

Elle Davidson: This song came on, on my way home from work. I am in college, so summer still means something. I was on the highway and this song came on shuffle, and I remembered that it was summer. There’s a line in the song, “I’ve been waiting all year to feel this good / In the summer,” and that hit me pretty hard. At school, at a lot of times I’m thinking about Milwaukee, and coming home and the special energy that the city has in the summer when it’s hot outside and there’s all these festivals going on. Sometimes I forget that I’ve been waiting all year to feel this good.

Justin Barney: Right on. So who’s it by?

Elle Davidson: Kate Nash, she’s one of my favorite singers. I’ve been listening to her since I was 12.

Elle Davidson: I really empathize with a lot of her lyrics. I’ve identified with them from a young age, and then throughout her progression as an artist and me growing into an actual person. She’s such a badass. I skipped my senior prom to go see her in Chicago.

Justin Barney: That’s great. What have you identified with?

Elle Davidson: She writes a lot about a specific kind of loneliness that comes with being a woman and having all of these thoughts about how you compare to other people, but also being confident. She also writes about constantly looking for love but also knowing that being alone is the safest place you can be. All of her songs are more or less about that.

Justin Barney: Does she portray that emotion in this song?

Elle Davidson: I think so, because of that line, “I’ve been waiting all year to feel this good.” It resonates with me so much because I so often forget when I’m in the middle of what I’m looking forward to. I just take a second to remember, “Stay wild and free,” like she says. It’s corny, but you have to say those things to yourself to feel that way.

I looooove this song. I’ve been indoctrinated into making “Backspin: The Search for Milwaukee’s First Hip-Hop Song” for the past month, so I’ve been listening to a lot of old-school hip-hop. This week I finally got the chance to listen to new music again, and this is the album that I got stuck on. It’s Shura, who I had never heard of before, but I started listening to it and I got caught up on this song, “the stage.” I like it because it is flirtatious, and I am a big flirt, so there is just something about it. I like its sensibility. It’s got this sense of “will we, won’t we,” and it talks a lot about kissing. It’s kind of romantic. I love it.