5 Songs We Can’t Stop Listening To with guest Alvvays

5 Songs We Can’t Stop Listening To with guest Alvvays 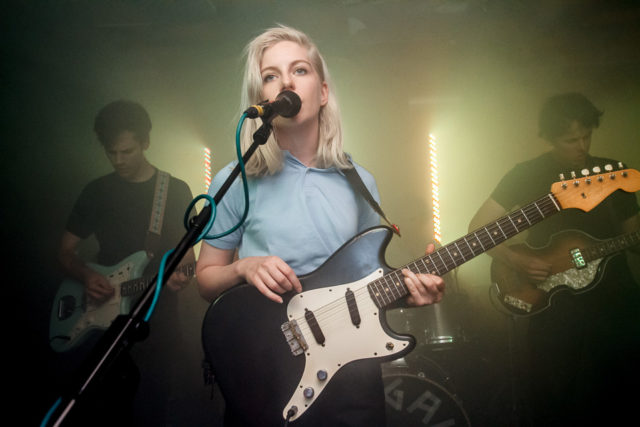 1. Alvvays picks “The Underside of Power” by Algiers

For the first song every week, we always ask one artist we love to tell us about a song they love. Our guest this week is Alvvays.

Alvvays is a band from Toronto, Canada. We’ve loved everything they have done. Their newest album is “Antisocialites”, of which you’ve heard several songs. Right now we’re playing “Plimsoll Punks”.

They’re going to be playing in Milwaukee at the Pabst Theater on March 24th.

Molly Rankin: Do you know that band Algiers? That song, “The Underside of Power”. Have you heard that? It’s so good. I haven’t heard anything like that before. It’s such a collection of different things. A combination of different sounds and genres.

It’s a nice feeling to have when you can’t quite put a finger on what you’re listening to.

Justin Barney: That was my initial reaction with that band as well. I listened to it and just heard history.

Justin Barney:  I think that guy has a PhD or something.

Molly Rankin: That’s useful in song writing. Maybe I should get myself one. You can just go get those, right?

We should listen to the song, this is “The Underside of Power” by Algiers.

Despite what I thought for a long time, the name of the lead singer is not Frankie Cosmos that’s their stage name. Her real name is Greta Kline.

In 2014 she released this album on bandcamp called, “Zentropy” that had all these song that were under a minute long, they all sounded like they were recorded in her bedroom,  they were super personal, very earnest, sweet, and just really wonderful.

That’s kind of the core of Frankie Cosmos. It’s a wonderful, innocent sweetness.

In 2018 she is moving on and movie up. She has signed with Sub Pop records and is slated to release her new album, “Vessel.” “Being Alive” is the second song we have off that record. The song has all those qualities we love about Frankie Cosmos, it’s sweet, clever and cute. It also includes a lot of her bandmates in it, which we have not seen before.

This song had me at the jump. When the lead singer hits, “That’s when I reach for my dissolver,” a reference to Mission of Burma’s 1981 song, “That’s When I Reach For My Revolver.” It’s clever because it keys you into something that you already know. So there is familiarity there.

I also love when music is referential. So when they refer to Mission of Burma, also a Boston band. You get a location. You get a history. You get background information. All from just one line.

They also put a little twist on the original song, changing the punch line from “revolver” to “dissolver.” Something to numb you to the world instead of taking you out of it. A sign of the times.

And also, the rest of the song just rocks. It twists and turns, surprising you at every measure. It comes around to that great hook too. All-in-all it’s a great song.

Justin Barney: I’m here with Tarik AKA The Architect. Tarik what are you listening to?

Tarik: Right now I’m listening to this artist Luke Marzec. I think he’s out of London. He’s a producer and multi-instrumentalist. He put out this song, “When We First Met” earlier this year.

I’m not a fan of romantic songs, per say, but this one hit a nerve with me. It feels like it could fit a Wes Anderson film. The lyrics are quirky, and, like me, awkward.

It has a lounge-y vibe without feeling Las Vegas lounge-y. It’s got this subtle hip-hop current going on. And it brings out the romantic side of me, which is rare.

Sometimes, you just have to run the trap, and running the trap is what we’re doing into this weekend. “5200” comes from Houston rapper, Maxo Kream. If you want to know what Maxo Kream’s childhood and living situation is like, he’s this great song, “Grannies”. He talks about being raised in public housing, his family, and what it was like to live in Houston in a really messed up situation. It’s an excellent autobiographical song, and a great look into the perspective and storytelling that Maxo Kream does in his music.

This one also has a great amount of storytelling. It’s about pushing and hustling 5200 different ways. It’s also got a great beat. I love how he changes flows in this song. He starts with one distinct flow, and in the middle goes into another one. It’s seamless and it feels good. Maxo Kream is an artist I just discovered this year. Love this song.