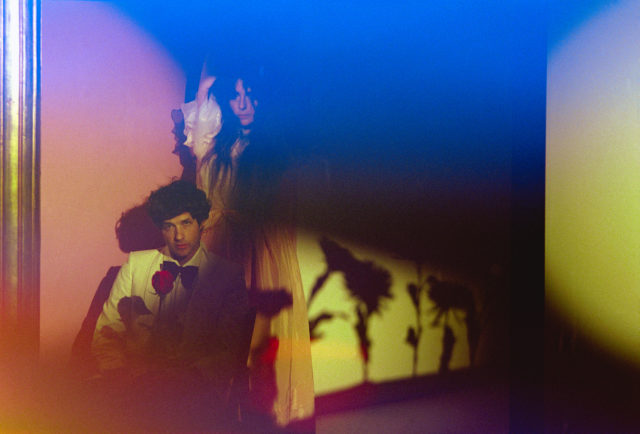 I’ve interviewed Beach House’s Alex Scally three times about songs that he can’t stop listening to, and each time our discussions have ultimately centered around lyrics. Which is interesting, of course, since Scally doesn’t write lyrics for Beach House. During our latest conversation about the his most recent song obsession (the 1990 Brian Eno and John Cale track “Spinning Away”), we discussed what draws him to good lyrics, and why he’s shied away from writing them during his own career.

You can read our conversation below.

I always talk to musicians about a song that they can’t stop listening to, and we, me and you, have done this twice before. Both songs that you picked and the reasons that you picked them, I think of all of the time. The very first time that we did this at Eaux Claires years ago, you picked a song “End of the Night” from The Doors. You talked about thinking of The Doors as a revolutionary band when you were a teenager, then thinking they were dumb, then at Eaux Claires you were like, “no, I’m reclaiming them, they are revolutionary.“

I think there might even be one more oscillation in my history with The Doors. One more, actually they suck. Wait, actually they’re the best. I think it’s been three full revolutions of that since the first time I heard them at age 11 or 12 or whatever.

Then the last time we talked, you picked “A Case of You” by Joni Mitchell. I had listened to Joni Mitchell, but there is something in what you said about it, that really made me listen in a different way. It made me fall in love with Joni Mitchell for the first time.

That makes me so happy to hear, because I always felt Joni Mitchell was completely unapproachable, for whatever reason. I just knew who she was. I knew the hits and I just couldn’t find my way in. And that’s exactly what happened. I think it was that song or one song on that first side of that record that brought me into her artistry. That record is still as poignant to me as the first time I heard it when I was 19. That’s such a beautiful record.

So Alex, what have you been listening to recently?

I’m going to say, “Spinning Away” by Brian Eno and John Cale, from the album “Wrong Way Up,” released in 1990. By 1990, Eno had left being, maybe what you would call, a frontman or having his own band or music, being the center of his identity. He had moved to producing cool records and collaborating a lot with other people.

That’s probably an oversimplification of that point in his career, but it seems to me like what was going on.

And how did this song enter your sphere?

This is a weird one, actually. I think I was sliding around social media and I heard someone playing this song on acoustic guitar, and I thought it was their song. I was like, “Oh my God. This person can write some serious lyrics.” But then I saw the caption below something like “This is my favorite song of all time.”

So then I was like, oh, okay, I’m going to check this out.

This was maybe a couple years ago. So I became aware of the song then. For whatever reason recently, possibly because of leave, reentering the world, possibly because of the absurd, intense passage of time that we’ve all experienced the last few years. Which has both felt excruciatingly slow and like time just disappeared. Something about this song, the way it discusses time and moments and creation in life, is really hitting right now in 2022, too.

How does it accomplish that?

So you’re like, okay, this song’s kind of cool. But then typically it has just really interesting, cool production going on. Really interesting drums, all the sounds fit really well together, the way Eno does.

Then the lyrics start. Which to me, is the absolute best part. It’s kind of just a little poem that he unfurls and it’s just really graceful and beautiful and the words are simple but really poignant.

And what is the poem about?

Literally, he’s just sitting somewhere and watching the night descend. He’s talking about creativity. He’s drawing. He is observing. Then he’s looking back at his drawing and trying to figure out what he made.

And so it’s very poetic. The way he draws the lines together, the way one line flows to the next, actually reminds me of some of my favorite Bob Dylan lyrics, like “Mr. Tambourine Man,” the way each line kind of just naturally leads to the next. And they’re all connected. It’s just beautiful poetry.

It’s simple, which is nice. It’s not pretentious in any way. It’s very simple.

Right. I feel the exact same way about when that’s the lyrical content of something. But I also think that even if a listener might not consider themselves a creative person. I think that creativity, the making of something is a metaphor for just existence. It’s like you wake every day, what are you going to make of the day? Of your time?

So I think you could see it as completely inside of the art, or I also think it could get depending on the lyrics and how abstract they are, can get lifted out into just being about how, each footfall you take is some sort of weird writing of a story that you’re making.

I’m a huge fan of lyrics and I’m also very lucky that I’m not the main lyric writer of this band. I’ll add some here and do some helping, but I think Victoria’s a very interesting lyricist. So I get to just be in this wonderful position of just getting to hear her lyrics all the time.

Do you want to?

No, I don’t. I don’t think it’s one of my skills. I enjoy them immensely, but I’m not good at it because the lyrics I tend to write are far too closed and rather than let the feeling be what it is and follow it. It’s like it cuts it down and closes it.

I feel very much like I’m happy, where I am musically. And that doesn’t include thinking about lyrics, that much.

That’s just so interesting to me that you’re drawn to it. It’s a thing that you do, but you don’t trust yourself to do it in your band.

I think it’s just honesty. You have to know what you’re good at in life and do that.

I believe that Victoria’s very good at naming feelings and following intuition in a really natural way.

Great. Well, that is it. Thank you.

I hope you dig this song. I don’t think it’s for every moment. It’s definitely an intense, emotional song. If you were at a casual, middle of the day, driving somewhere, it might not be the song you put on, because it’s just, so intense.

Those are my favorite songs.

Beach House are playing at the Riverside Theater this Sunday. Tickets are available here.