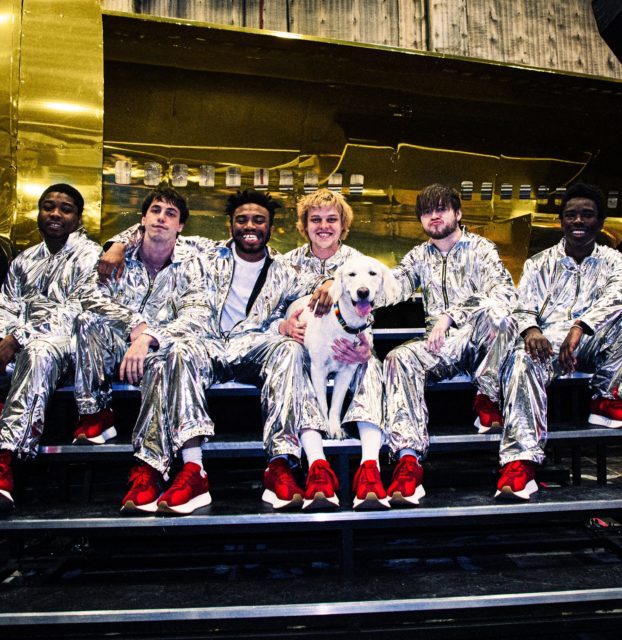 5 Songs We Can’t Stop Listening To is our chance to talk to artists we love about songs they love. This week, we’re dedicating the entire segment to members of BROCKHAMPTON, the self-proclaimed boy bad from San Marcos, Texas. They all met on this Kanye forum online called, “KanyeToThe.” In 2018 their album, “Iridescence” debuted at #1 on the Billboard chart.

Each member of the group is eclectic in their own way, and it shows in their picks — a grab bag of songs that span genres and decades.

Read the interviews and hear their picks below.

Dom, what is the last song you couldn’t stop listening to?

Does it have to be a new song or an old song or whatever?

It can be anything.

I don’t know exactly, but the first time I heard it, when I got back into binge listening to it, that intro guitar riff stopped me in my tracks.

Whatever I was doing, I forget what I was doing, but it demanded my attention. From there I have just been listening to it over and over again.

Rihanna, of course, is an icon. What is the singular thing that stands out and makes her amazing?

How multifaceted she is. She’s an incredible businesswoman. An entrepreneur. Musician. Singer. I mean, what can’t she do?

Also, can you tell me what shoes you are wearing?

I am wearing the Double Cross, Reebok Questions. they just came out not too long ago. The left shoe is from 1997 and the right shoe is from 1996, Allen Iverson’s rookie and sophomore years.

The last song I couldn’t stop listening to was “American Love” by Rema.

I don’t know who that is. Could you tell us about Rema?

3. Joba picks “For the Sake of the Song” by Townes Van Zandt

The last song I couldn’t stop listening to and still have not stopped listening to is from one of my favorite albums. By songwriter/artist named Townes Van Zandt. He’s from Fort Worth, Texas. And the song is “For the Sake of the Song.”

Generally after every show I listen to it.

“For the Sake of the Song” is such a sad song.

Nah, I think that it’s more insightful than sad. He has this way of writing that is vague enough where you can implement your own personal experiences into it. For example, one of my favorite lines is…

Why does she sing her sad songs for me? I’m not the one to bring her soft sympathy. I’ve just begun to see my way clear. And If I stop I’ll fall. Maybe she just has to sing for the sake of the song.

And one that I relate to, but would never word or even think about in that way.

4. Matt Champion picks “Fly Me To The Moon” by Bobby Womack

Do you have a memory attached to that song?

Yes I do. It was actually a shared memory. I was watching “Euphoria” and I hadn’t heard the song before and then it was in the show and I really appreciated the way they put it into it. there is a moment where Zendaya is coming home from overdosing, but it’s her being with her family and everything. It made me listen to that song over and over and over. I love it. It’s beautiful.

5. Kevin Abstract picks “You Make Me Wanna” by Usher

The last song I couldn’t stop listening to was “You Make Me Wanna” by Usher.

I like the mood of it. And it just makes me think of when I was a kid, listening to it on the radio. I’ve been going back to it a lot. i just makes me feel good.

What is your relationship with Usher?

I was never too big on Usher, just hearing all the big songs when I was a kid. that’s about it.

Me and my coworker were talking yesterday about how Usher had this great period and lately he has been riding the wave of current pop hits and following the lead of others, instead of shining on his own. Do you think that is true or do you think he’s still on top?

I think that is true. But it’s also hard to continue and to try to be ahead of the curve. I think the older you get and the more successful you get, sometimes, the less hungry you get. I’m not trying to speak for him, but maybe that has something to do with it. I don’t really know.

And so what do you like about this song in particular?

I like the chorus. I love a good chorus, man.

BONUS: Bearface picks “Both” by Headie One

The last song I couldn’t stop listening to was “Both” by Headie One. He’s this rapper from the U.K. Probably one of the hardest rappers coming out of the U.K. right now, other than Slowthai.

Hard in what way?

What do you think makes for a good rapper?

So what do you think that he does that is the number one thing?

He’s super direct. Like, it’s all substance, no style. it’s all straight to the point. He doesn’t do any hooks with singing an shit. It’s all just him killing it with bars.