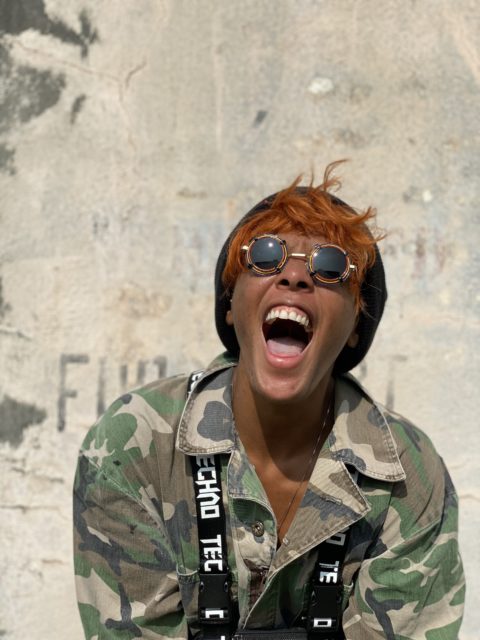 I drove down to New Orleans to interview Dawn Richard.

She’s just signed to Merge Records after 10 years as an independent artist and a contract with Sean “Diddy” Combs label, Bad Boy Records. On April 30 she’ll release her first album on Merge, “Second Line.” So much of Richard’s identity, and of “Second Line,” are wrapped up in New Orleans.

She told me to meet at Main Squeeze Juice Co. It was a short walk from The French Quarter and I got there an hour early. The sound of juicers bounced off the concrete walls and the music is a little too loud. There was an empty lot across the street that I knew would make for a better recording but the sun was beating down and there was nowhere to sit. I would be willing to sit on the ground in the blistering sun to get good audio for the interview, but I wasn’t sure someone who is releasing one of the most anticipated albums of the year and would probably be dripped out in clothes I could never afford would want to sit in the dirt together.

Dawn was 10 minutes early. It was an immediate sign that she cared. She walked in. “Dawn, what’s up?” Before she could even give me a box of vegan king cake that her eco-friendly sensory experience, PapaTeds, makes, she turns and politely says, “Could you please turn the music off, we are doing an interview” to the juicer at hand and gives me a big piece of the homemade king cake. “I pop up with this place on Sundays and that’s why I wanted you to come here because it’s pretty awesome. The story behind the team is that the owners are two brothers, just out of college and for some reason they took a chance on us as a small business and I wanted to show them love too.”

As she was telling me about PapaTeds, her pop-up business that is part vegan bakery, but also an artist workshop with artists painting and DJs spinning that has been described as New Orleans first ever eco-friendly sensory experience she is assessing the situation. It’s still too loud even with the sound down and she knows it. As she is in the middle of giving love to the people at Main Squeeze she looks out the window, points to the empty lot and says, “You wanna go outside?” She leads me across the street, never missing a beat. “Do you want to be in the shade?” I ask, feeling bad. “I’m the Black girl in the sun. I love this stuff.” She puts me at ease. This whole time she has also been talking quickly, passionately, and precisely about being born in New Orleans.

Dawn Richard was born in the lower Ninth Ward. Her parents were both teachers. In addition they were both creative, her mom was a dancer and her father was a musician in the band Chocolate Milk. “They didn’t make money in the world of art. Their living was off of their jobs as teachers. That’s how they got out of the hood. They got their masters degrees and worked hard.” Her mother get her masters in elementary education and her father’s in music. They met when they were 14 and 15 in a park in New Orleans. “My dad was severely shy and my mom was super popular.” On “Second Line” Dawn has a recording of her mom saying that’s she’s only known one love. And it was her father. They were strict. Devout Catholics and stern parents.

Her parents were just 14 and 15 when they met. “My dad was severely shy and my mom was super popular.” They met at a park in New Orleans and have been together ever since. On “Second Line,” there is a recording of her mom saying that’s she’s only known one love. Together they got their master’s degrees and became teachers. Her mother’s degree is in elementary education and her father’s in music. “That’s how they got out of the hood. They got their masters degrees and worked hard and went from one track to the next.” Not a metaphorical track either. Richard explains the geography of the wards. They were in the Ninth and over the railroad track was New Orleans East. “If you got over there you made it. They called you the bougie Black people. My parents got just over that track.” In the future, a track that couldn’t stop Hurricane Katrina.

In their household, “education was important. Being good was important.” Her parents were devout Catholic and believed in the hard work that raised them up. “You gotta try 10 times more.” Dawn tells me. She sounds like she’s channeling a mantra from her mother and says it with belief in her heart. Though they were strict and goal based, both her parents were creative. Her mother was a dancer and her father was in the band Chocolate Milk. Dawn too began creating when she was young, performing at Tipitina’s she was noticed by a record label, which eventually lead to her releasing her first album co-produced by Ne-Yo, negotiating a record contract with Sean “Diddy” Combs, opening for Anthony Hamilton and becoming an NBA cheerleader, all while attending the University of New Orleans. Dawn Richard is always trying 10 times more.

Then a big break came. Sean “Diddy” Combs, who Dawn casually refers to as Puff, was overseeing the MTV show, “Making the Band” and Dawn auditioned and made it on season 3. She made it. And she succeeded. After Puff narrowed it down to the final 12 he sent them all home to see “who wanted it” before narrowing it down further. Two weeks later Katrina hit. The railroad track could not stop the flood. “We lost everything.” Her grandma, aunt, grandfather and the whole family all lived within a mile radius of each other. Suddenly they only had a car and they were living out of it. The only person that wasn’t living in New Orleans was her brother. He was going to Johns Hopkins University in Baltimore, living in a one bedroom with his girlfriend. After a couple weeks he found a way to get a hold of them and asked them to come live with him. “We took our little car and we drove and we never stopped until we hit Baltimore.” Dawn lived on the floor. But the show was still going. “When I went back to the show for him to pick the final five I had no clothes.” Against it all, she made the band.

The band, Danity Kane signed to Bad Boy Records, Puff’s label. “I was in the band, but we had no home.” Dawn said that in this time her mindset changed. “My journey became not living for myself.” She was now living for her family and community. They spent ten years in Baltimore. During that time Danity Kane had some success, but eventually broke up, she became an independent artist, and released a trilogy of albums that were progressive and continue to be criminally under appreciated. On the 10 year anniversary of moving to Baltimore, they moved back to New Orleans and Dawn dove into her culture.

She got reacquainted with Washitaw Nation, her Indian tribe. I tell her that I know nothing about Black tribes of New Orleans, so, like her parents, she educates. She tells me that there were Native Americans and African natives in New Orleans. At that time, “they told the Native Americans that they would meet a people who were trying to be free. They wouldn’t speak your language, but they would be kind and need your help.” “In that process what they learned was The Chant and The Feather.” The Chant is music. The Feather is sewing garb. “That was how the language was translated between the two parties. That became the culture of New Orleans.”

Other cultures were mixed in too. New Orleans had Haitian culture and West Indian culture and brought Carnival, Dawn tells me. All of this information is so inside of her. It’s all information that she has tracked down firsthand. She talked to her father, who didn’t know much more than that he was from the tribe of Washington Nation. The Black tribes of New Orleans formed in the different wards of the city.  “Tremé has it’s own tribe. Ninth Ward has Wild Tchoupitoulas. And each tribe has a story behind them. And every year they sew these costumes and pay homage to show love to the stories that have been translated in these families for generations and generations and generations.”

I ask her about the story passed down to her, one she had to go to her own chief for. She says the story of the Washitaw comes from the black feather, which came from the Choctaw Indians communicating with the Haitian culture. Dawn’s father’s side is from Jacmel, Haiti. He did not mask, sew garb, or chant, but her Uncle Herald did. Now she has taken it upon herself to carry on her culture. “I’m took it upon myself to talk to Chief Montana, and Chief Shaka Zulu and learn the Chant and the Feather.” Each tribe has meetings that start with the chant, Dawn sings a couple bars of “Indian Red” a common tribe chant that marks the beginning of a meeting, where they educate their community on their culture and tribe. Each person in the tribe has a role and they sew garb based on that role. They will spend all year sewing a costume that they will wear one time. The costumes are one-of-a-kind pieces of art. “I brought Vogue here to see it and I told them that the pavement is our runway.” Dawn says  On cover of Dawn’s last album she is wearing a gigantic white headdress. It was made by her chief, Chief Montana. On the cover of her new album she is wearing a head dress too. But she is pushing that tradition forward too.

The headdresses are for chiefs. They say women can’t be chiefs. And I said, ‘Bullshit.’ And that became the era of calling women Kings.

Musically too. “I’ve been really trying to push New Orleans and the sound of us into Afro-futurism and into the future.” She says when she grew up all her favorite artists were trans artists like Katey Red and Big Freedia and wants to make music that is built for gay girls, Black women and spaces where The Other wasn’t seen. “Fuck your idea of what a hierarchy should be.” She capped her thesis with, “My music speaks to that because my music comes out of that Other space.”

And that’s what she’s done on her new album.

At the end of the interview I got up as a new person. We took portraits and she ran up to a trolley car so I could take a photo with my disposable before thanking her profusely and walking off in a day dream. I got to Jackson Square, took a delicious bite of the king cake and texted the record label.

“She’s the most intentional person I have ever met,” the label texted back.