Fred Armisen shares the song that made him a bluegrass fan

Fred Armisen shares the song that made him a bluegrass fan 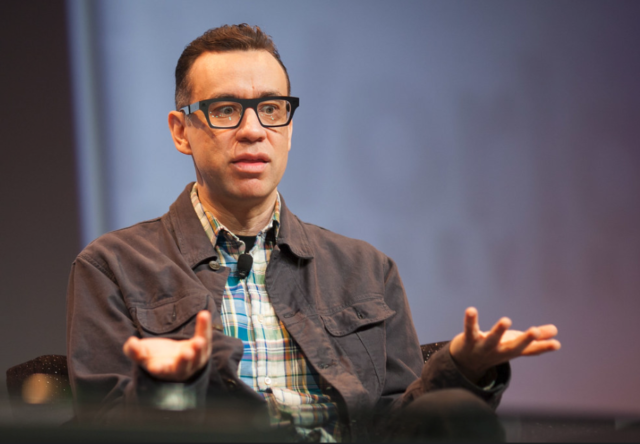 From the music desk at 88Nine Radio Milwaukee, I’m Justin Barney. This is Five Songs We Can’t Stop Listening To, and my guest today is Fred Armisen. Fred Armisen is a comedian of “Portlandia” fame. He was also a cast member and writer on “Saturday Night Live” from 2002 to 2013. He was a band leader for “Late Night with Seth Meyers.”

He is also a very funny standup comedian, and he is coming to Milwaukee tomorrow. He’s going to be playing at Turner Hall Ballroom Wednesday, Dec. 11 — tomorrow night. My guest today is Fred Armisen.

Fred, What is the last song that you couldn’t stop listening to?

Well I have to be honest with you because you know sometimes I want to pick something that sounds cool to say. You know what I mean? Or like I’ll try to think of a favorite of the last 10 years, just because there are certain songs that I just go to all the time, but my real answer is a little different in that recently I’ve been watching this PBS documentary on country music.

Yeah. So you know, with music sometimes I think I’ve, I’ve heard it all and I know what’s what, and everything’s in its own compartment, and there’s stuff that I don’t know. And there’s stuff that I do know, but I’m set in my ways. But then with this documentary, it sort of unlocked something in my ear where I heard country music in a different way just from the documentary.

So, hearing it, and you’ve seen it, so you know how they sort of deconstruct what goes into these songs. I started looking for it. I don’t think I had very… Might have had some Merle Haggard in my collection, but not much.

I didn’t have much country music, and it’s not that I dislike it or anything. I just wasn’t exposed to it. So then I start looking for stuff. And I’m like, I had to write down names. I was like, “Okay, here’s some people who, I’ve never heard of this person. Who is that? Okay, I’m going to write that down. Look for this record.” And then I wrote down Earl Scruggs, right? I was like, “Earl Scruggs, who is that?” Oh, it’s like kind of bluegrass.

It’s been a while since I’ve done that with music, where I didn’t hear. Like I kind of never heard it before really. So, that is my answer. So like even though you know, I don’t know. I feel like kind of late in the game to be all of a sudden talking about bluegrass, but I got to say, my honest answer is that’s the song I’ve been listening to.

I love that. Of all the things, I wouldn’t expect you to be drawn to bluegrass, because the bluegrass and the string music is completely devoid of drums of any sort.

Absolutely. I agree. But, I hear banjo as percussive.

Because since it’s kind of like based on an African instrument and it looks like a drum. It looks like a snare drum, so that finger-picking style to me takes the place of it. It’s closest to the Timbales to me, same kind of drum, metal drum, and it’s like the same sound. So that to me fills in the drum, but I’m with you. In fact, that’s what I used to say to people. I was like, “Oh, I don’t get into much of that because there’s not enough drums.” And I’m like, “Fred, you dummy. It’s all drums.”