From the Music Desk: The Circle

From the Music Desk: The Circle 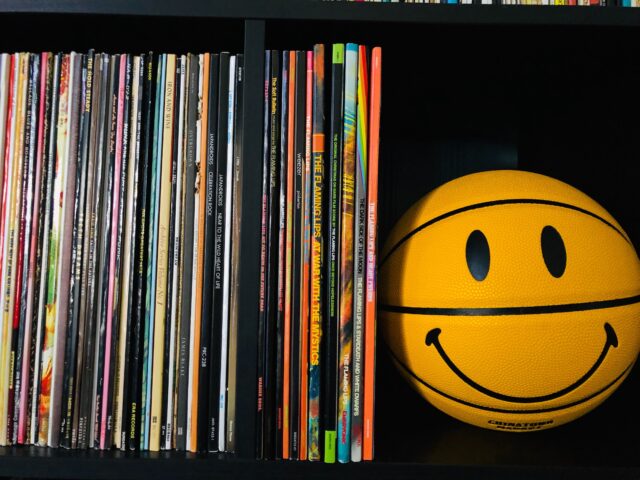 There is this phenomena in music that my dad and I talk about all the time. He calls it The Circle. I think of it more as a web. It happens when you discover that two things that you love are connected. By some red yarn. It’s the connective tissue of your taste.

One of my dad’s favorite examples is that David Bowie sings the background “Bum bum bums” in Lou Reed’s “Satellite of Love.” Or discovering that an artist that you love covered a song by another artist that you love. My dad loves Rod Stewart and he loves Sam Cooke. “Bring It Home/You Send Me” on “Smiler” is the red string. I think that for my dad, maybe it is a continuation of some kind of big Truth about music. A romantic through line.

I love that idea but I also love the idea of the big web. I love connecting the dots with the string. To create one understanding of music. At large and in your heart. A real and symbolic mythology. What is history? That’s what it is. We are making it. We are making ours.

Today I strung a line of red yarn. Dave Friedman.

He is the producer on all The Flaming Lips albums. About a year ago I got hooked on The Flaming Lips. It was odd. The Flaming Lips are a band I had never really taken seriously before. They were a band I knew and everyone knows. How could I fall in love with a band that I already knew so much about? Why did it take me so long to pay attention? How did I fall so hard? It happened after their last album, “King’s Mouth” came out. I didn’t even know that they had a new album out but I felt it was my job to see what it was about. So I listened and it grabbed me. It hooked me. It was soft. And imaginative. Innocent. And thoughtful. I wanted to find out more about this band.

I remembered “Do You Realize??” I remember that childlike wonder. I remember my dad singing “She Don’t Use Jelly” to me and my brother in the first house on Griffin Avenue. Maybe I had missed something with them. So I checked online. They had just released a 53 song “Best Of” album. It was audacious. And kind of funny. And also, it presented a challenge. And I’ve always liked an art challenge. When I heard that a man in Sweden wrote one big book about his life and split it up into seven volumes I had to read it for the challenge. This summer I watched three consecutive Oscar-winning best pictures from the ’70s and ended up watching every Best Picture winner of all time. I have to be careful when I start a TV series because I know that I will have to watch every episode that was ever made of the show. When I get a couple steps into a project I am neurologically compelled to finish it.

So when I got five songs into the 53 song Best-Of album, there was no question that I had to finish the whole thing. By the time I got to the end it was like I had done an entry level college course on The Flaming Lips. I heard them go from a band that was a group of lovable weirdos who sang songs about strange concepts, then into latching onto that weirdness and honing it in, and fine polishing itself, then releasing a couple albums where they truly came into their identity, then to take that weirdness too far, and then to come back to that wide eyed wonder. It was a real study. It was interesting. So I dig more. Rush Mor had their first five albums in a boxed set. Dan tried to talk me out it, but I didn’t let him, and I bought it. I wore it out. I saw Jim DeRogatis at Colectivo. When I brought up the Lips, who he wrote a book about, he pulled up a chair and told me to sit down. He ended up sending me a copy of the book. “Turn it on and all the way up!” He inscribed.

At this time The Rentals released a new song from their upcoming album. I loved it. There was something about it that reminded me of The Flaming Lips. I thought it must have been that I was just so consumed with the Lips that another band from the same era playing similar instruments must have sounded similar. But there was something more. The identity of the song seamed to be similar to the Flaming Lips. There was a body there. When I looked it up, it was produced by Dave Friedman.

While listening to The Flaming Lips box set, I had been reading the lyrics and looking over the liner notes and Dave Friedman produced every one of those records. For a while I had been wondering if I was in love with Wayne Coyne, wide eyed wonderchild and band leader of The Flaming Lips, or Dave Friedman, the man who constructed the sound that was so playful and free flowing. Connected by that special something. The same thing I heard in that Rentals song.

Tonight I got a new turn table and I wanted to hear it on a record I would know, and so I put on The Flaming Lips “Transmissions From a Satellite Heart.” Their breakthrough that features “She Don’t Use Jelly.” I was about to confirm Friedman’s genius when I read the liner notes and was shocked to see that Dave Friedman did not produce “Transmissions.” It was Keith Cleversley, not Dave Friedman. I was shocked, so I googled Friedman to see if there were any other albums he did not produce and see if they were the ones I didn’t like or something that would give me more insight. Listed in his Wikipedia accredited bands was Weezer. Though he was not as credited fully as sole producer on any of their albums. But when I looked it up it turns out that he was a producer, though he is not fully credited, on their album “Pinkerton.”

“Pinkerton” is my Big Album. I think most everyone has an album that defined them. For me that album was “Pinkerton.” I got it on CD from Walmart when I was 15. I had the Blue album and liked it. I had the Green album too. “Maladroit” was out, but the cover didn’t interest me as much as the Japanese field in the “Pinkerton” album. So I got “Pinkerton.” It hooked me. Shortly after I made an oath to myself that I would only listen to Weezer for an entire year. Another arbitrary challenge. In that time “Make Believe” came out, and I loved it. I recognized that it had some weak points but I just got iTunes and it had a counter on how many times you listened to a song, and I wanted “Make Believe” to get 100 plays so I listened to it every bus ride for a good two months. I didn’t make it to 100 but I guarantee that I made it to 100 on “Pinkerton.”

My brother and I had a job washing dishes at The Steakout on Loomis Road and I would bring my CD player and a stack of CDs and that’s all we had to play from 4 p.m. until bar close. We probably listened to it six times a night twice a weekend until I got enough money to buy more CDs and change them out more often, but we still listened to “Pinkerton” the most. “Butterfly” was my favorite song. I always dreamed of being in a band and I imagined that we would cover “Butterfly,” and I would think that only real fans would get it. Well it turns out that Dave Friedman produced that song.

Whoever was producing the album at the time was in recording sessions with them and he said that they kept playing The Flaming Lips’ album “Clouds Taste Metallic.” And they wanted it to sound like that. They had the money. They were on Geffen. So they called Dave Friedman, who produced “Clouds Taste Metallic.” He produced some of my favorite songs from the album, “El Scorcho,” and, of course, “Butterfly.”

Did I fall in love with The Flaming Lips because there was something buried there? Did I recognize Dave Friedman somehow? Is that sound ground into my DNA to the point that I was somehow magnetically pulled in their direction by a latent voice in my taste’s subconscious? Is this what accounts for taste? Is that even possible? Does it even matter?

I don’t know. But that’s what we love about The Circle. It has a life of its own. It’s there. Sometimes you can see it if you look hard enough. You can see the red yarn connect two pictures on the bulletin board of your life. It’s our favorite thing in music. It’s mystery and certainty. And I’m glad that I saw that red yarn tonight.