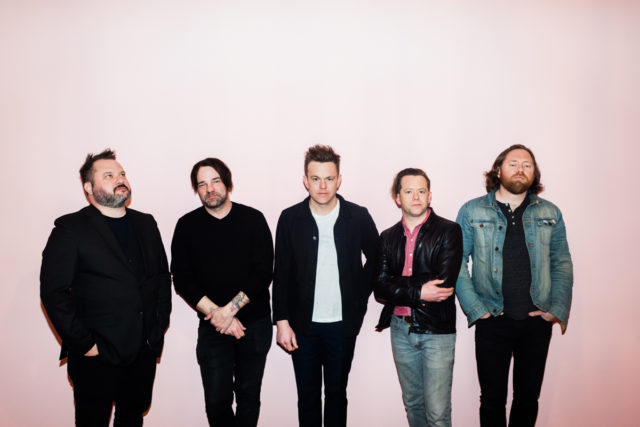 Justin Barney: Matt, what is the last song that you couldn’t stop listening to?

Matt Pryor: Well, it’s kind of  two ends of the same spectrum, but there’s like four songs on the new PUP record that I can’t stop listening to.

Matt Pryor: “Morbid Stuff,” “Kids,” “Closure,” and then — what’s the name of the one that’s like “Just ’cause you’re sad again/It doesn’t make you special at all?” So I would listen to those kind of on repeat. They’re good for running, you know?

Justin Barney: Yeah! In the sphere of the world that I’m in, a lot of people really like PUP… What do you think they have captured?

Matt Pryor: It’s the sound of a band that’s really hitting their stride, in my opinion. They’ve always been good, but this is kind of like, “Oh, you’re really upping the ante on this one, aren’t you boys?” And I know those guys, we’ve toured with them before, and that is always like an extra level of like, “I’m happy for them.” I feel like they’re kindred spirits and they’re maybe going through a similar time in their career that we went through in the late ’90s- early 2000s where something is clicking, you know what I mean?

Justin Barney: Oh, for sure. What do you like about their songwriting?

Matt Pryor: You know, there have been bands from Toronto before that kind of meld this sort of like screaming and singing, that’s not like screaming in a hardcore way. It’s more shouting than screaming.

Matt Pryor: I think that that’s really cool. But then I do listen to it and it’s like, “Ohhh buddy.” When you’re in your forties and you still have to sing like that you’re going to regret it. I have to do that now, and it’s… [stressfully exhales.]

One song that I can’t stop listening to is “Sharon” by Rosenau and Sanborn.

The Sanborn in Rosenau and Sanborn is Nick Sanborn, the beat maker and knob twister in the duo Sylvan Esso. The Rosenau in Rosenau & Sanborn is Milwaukee’s own Chris Rosenau, an instrumentalist in the bands Collections of Colonies of Bees and Volcano Choir.

Together as Rosenau and Sanborn they do the best of what they do in their respective groups. Chris Rosenau builds beautiful moments of music as art, creating a moment. Nick Sanborn, as he does in Sylvan Esso, is a counterweight and a balance point to beauty by creating these wild bits of hooky beat-making through his analog synthesizer. Together, you wouldn’t think that they would necessarily make sense, but that’s the beauty of it. They balance each other out and create this beautiful work of art together.

3. Gabriela from Rodrigo y Gabriela picks “The Pot” by Tool

Justin Barney: I want to know the last song that you couldn’t stop listening to.

Gabriela: I think very many, but one of the tracks I really love is “The Pot” from Tool. It’s always an interesting listening, it’s very long and has a lot of details. Before our shows we always play the song.

Justin Barney: What do you find interesting about them?

Gabriela: They are very groovy, yet they always play different measurements, it’s not a conventional thing. Sometimes when you hear bands, they do a different measurement and it’s not conventional, they can sound very technical. But with this band, everything flows. The riffs are very good, the melodies, and the sound is dark, heavy, power, but it’s also very musical.

Justin Barney: Of all of their songs, why “The Pot”?

Gabriela: I love the melody and the way that the song starts, the voice melody is very powerful. I don’t really understand the lyrics, I don’t speak English much so listening to songs like that, it’s hard. I don’t put much attention to the lyrics so I don’t really know what the song talks about, so it’s always the music that drives me.

Justin Barney: That’s great. So you use it before you come out?

Gabriela: Yes, for maybe 10 years now we have been using it.

Justin Barney: Wow, so it’s a part of your show?

Gabriela: It is part of our show. And then we always finish with “For Those About to Rock.” We started that about 11 years ago.

I am here with DJ Tarik AKA The Architect.

Justin Barney: Tarik, what is one song that you can’t stop listening to.

DJ Tarik: It’s a really cool group out of Cleveland, I guess they’re a collective. They go by the name Mourning [A] BLKstar.

Justin Barney: Oh, I know this group. Tell me more about them.

DJ Tarik: Well they’re out of Cleveland, and they describe themselves as a multi-generational, gender and genre non-conforming amalgam of black culture dedicated to servicing the stories and songs of an apoctalyptic diaspora.

DJ Tarik: Let’s put it this way: They take early Parliament and funkadelic-

DJ Tarik: kind of the futuristic R&B of Solange-

Justin Barney: look at that-

DJ Tarik: You mesh it together with great storytelling and great lyrics and that’s Mourning a Black Star.

Here, he tells his own story, and this is a story of losing faith — the story of being a kid. The line that got me in this song is “I used to dream I’d make the league/Called plays in the huddle.” NBA dreams! What little kid doesn’t have NBA dreams like that? And then as the song goes on, he wakes up to the reality that’s around him. No food, no clothes, he loses those NBA dreams, and he’s got to get a job at Panera. So he gets this job at Panera and puts his faith in God that He will help him out of this, but those prayers aren’t getting answered, and he’s still in the same situation. So he turns to selling drugs, and he loses his faith in God, but he finds this faith in himself. He’s got to put his faith in the work and he is going to get himself out of this. So he puts his faith in the work and prays to the dope.