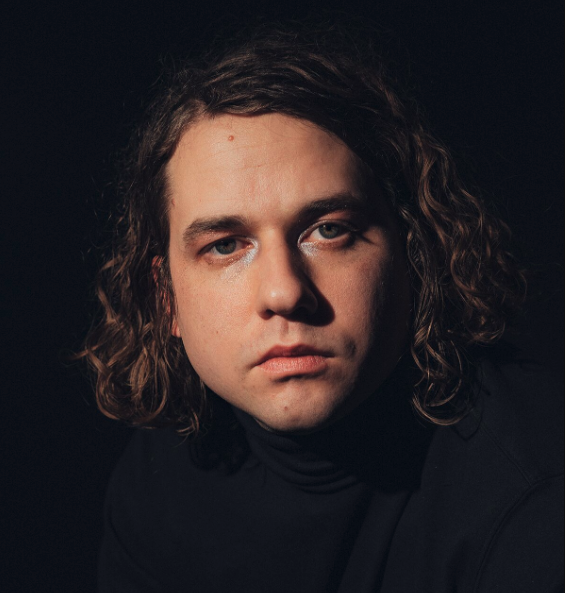 Earlier this year, Kevin Morby released his fifth album called “Oh My God.” I believe it to be his best album, also, as it stands, in my top three albums of the year. I am absolutely obsessed with the thing. We have been playing the song “No Halo.”

Justin Barney: What is the last song that you got stuck on?

Kevin Morby: That’s an interesting question. I haven’t been listening to this song that much, but it has been in my head on repeat. It’s off the new Bill Callahan record, and the song is called “747.” Do you know this record? Do you know this song?

Justin Barney: I just talked to David Gray about it yesterday, and he was raving about this record. What do you like about it? What do you see in it?

Kevin Morby: Well, there’s a lot of airplane imagery on my album, and a lot of my record is about flying and about being on airplanes, and I’m a huge Bill Callahan fan — I have been for a very long time. I think he’s my favorite contemporary, living songwriter. I was really looking forward to this record and there’s a song called “747,” and the first lyrics really hit me because it was something I was trying to describe in my album. Basically, the song begins with him saying “I woke up on a 747/Looking out at some stock footage of Heaven” and it’s just kind of perfect. It made me feel like we were having a similar experience, or we both put songs out about airplanes, and I just felt really close to it. Also, it’s one of those things where he’s one of my heroes, and I had to make this whole record about airplanes, and in one line he just annihilated my whole album.

One song that I can’t stop listening to is “Perfect Place” by Sui Zhen.

I was kind of passively listening to this song, and I heard the synth line and it reminded me of the synth line that is in “This Must Be The Place (Naive Melody)” by the Talking Heads, and that grabbed my attention. And when I started paying attention to the song, I heard the lines “Perfect place” and realized that this song is called “Perfect Place.” And I don’t know if the connection between “This Must be the Place” and “Perfect Place” is conscious, and I don’t know if it’s even really there or if it’s just in my mind. I like to think that this is a little wink to the camera — to those people that know both songs. I don’t know if that is true, but that’s what I’m sticking to.

3. Chuck Klosterman picks “I Only Want To Be With You” by Dusty Springfield

My guest today is Chuck Klosterman. Chuck Klosterman is one the greatest thinkers of our generation. He’s a cultural critic, and an author who has written eight best-selling books, including “Sex, Drugs, and Cocoa Puffs.” He just released a new book this week called “Raised in Captivity.” He will be at The Back Room at Colectivo this Thursday, July 18, talking about that book, and a number of other things.

Chuck Klosterman: It’s “I Only Want To Be With You” by Dusty Springfield. I was driving my kids to school, I have a five year old and a three year old, and I have Sirius XM radio. So I was just flipping through channels and I came across this Dusty Springfield song, which I probably had heard at some point, but I didn’t remember hearing it.

Just the style that she sings in and just her voice in general, but also the almost disarming positivity of the song. It made me think, actually like if this had been the olden days, like what a great song this would have been for a mixtape for a woman, you know. It would have been a great. So then I dropped my kids off and switched my stereo over to Spotify, and I played the song about 70 times. I would just play it in my car as I drove around. That was probably a month ago, but that was definitely the song fitting this criteria. That was the last song I couldn’t stop listening to.

4. Nate Imig picks “Key to Love (Is Understanding)” by The Majestics

Justin Barney: I am here with Nate Imig. How’s it going?

Nate Imig: It’s going great. I’m in podcast mode. I’ve been listening completely immersively to music from the late 1970s to the mid-’80s, so that’s kind of where my brain is at right now.

Justin Barney: Why are you in podcast mode? What podcast?

Nate Imig: What podcast could we be talking about — well, we’re working on a podcast called Backspin: The Search for Milwaukee’s First Hip-Hop Song. You know a lot about this Justin, because you are one of the hosts, along with Tyrone Miller.

Justin Barney: Yes, we have been searching for Milwaukee’s first hip-hop song.  The podcast is out now.

Nate Imig: We found the song too.

Justin Barney: Spoiler: We found the song. And in it, you’ve been listening to a lot of old school Milwaukee music. Is there a song in particular that has stuck out to you and been in your head for this?

Nate Imig: Yeah, and in fact I think this song might have been in your head, in Tyrone’s head, in all of our heads — and it’s not the first hip-hop song.  But it’s a song that we discovered in the process of trying to find Milwaukee’s first hip-hop song, and it comes to us from The Majestics.

Justin Barney: And what is it called?

Nate Imig: The song is called “Key to Love.” Just the assumption that this one song can tell us the key to love, you know, it’s kind of a presumptuous song title, but I think it delivers.

Justin Barney: So, according to The Majestics, in 1982, what is the key to love?

Justin Barney: There it is.

Nate Imig: It is kind of mind blowing, it’s a pretty simple concept.

Nate Imig: They’re not wrong. I was just at a wedding and the whole ceremony was basically premised on that. Like, hear each other out, understand each other, give each other slack. And The Majestics had this nailed.

Justin Barney: They had it right all along.

Nate Imig: So this song is a lot of fun, and I think the reason why I love it so much isn’t for the vocal performance or the production of it, it’s just the — it’s the theme, it’s the understanding. It’s like, that is the key to love, right I mean-

Justin Barney: It is.

Nate Imig: So simply stated, but I think it, you know, gets in your head and it sticks with you.

5. Justin Barney picks “Calm Down aka I Should Not Feel Alone” by Ezra Furman

This is the final song this week and it is my pick. My pick is called “Calm Down aka I Should Not Feel Alone” by Ezra Furman.

Ezra Furman is just one of those artists that can do no wrong in my book.  Everything that they’ve done has this pop core to it that is fun and shiny, but on top of it is Ezra Furman’s voice, just kind of erratic and heartfelt. Ezra Furman is calling this their punk record, but even at their most punk, they still have this semblance of fun and sunshiney energy.

If you’re ever in an argument and someone tells you to calm down in the middle of it, you want to yell at them like Ezra Furman yells in this song.