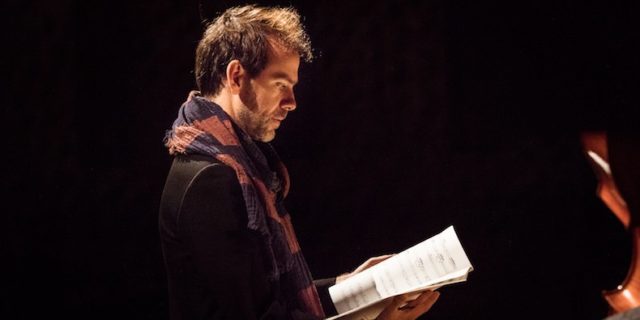 1. The National’s Bryce Dessner picks “You Are My Sister by Antony & The Johnsons

The National is one of our favorite bands. You probably know them and love them. They just released an album called “I Am Easy To Find.” Bryce Dessner is the guitarist and composer in the band. Outside of the band he is also a composer in his own right. He has won a Grammy for doing it, he has composed for the L.A. Philharmonic, he has been at The Met, he has performed at Carnegie Hall and he is accomplished and respected as a composer. He is also the guitarist for The National. We recorded this interview backstage at one of their performances.

Justin Barney: What song do you have on pause on your phone right now?
Bryce Dessner: “You Are My Sister” Antony & the Johnsons.
Justin Barney: That makes a lot of sense to me! Okay, so why were you listening to this song and why do you like it?
Bryce Dessner: Anohni, formerly Antony, I think is really one of the greatest artists of our time.
Justin Barney: So do I.
Bryce Dessner: And I think her voice is kind of following from Nina Simone, I think she is just so exceptional and I don’t think that we will see another singer like that of our era.
Justin Barney: What do you like about her composition work?
Bryce Dessner: There is a kind of sense of humanity in the music, kind of like great classical music, she is constantly playing with frays and tempo. If you listen to the songs they are very simple, orderly simple, but in terms of interpretation, she is a classic singer. So you know, simple songs almost no one else can sing those songs and they speed up and slow down in the same breath, so the musicians that accompany her are exceptionally good. Then obviously she is revered as someone like Lou Reed, who is a deep, deep fan of Anohni. I kind of see her as a classic New York figure from that period and you put her next to Warhol, Laurie Anderson and Lou Reed. She is a New York fixture.

At the beginning of this song Hatchie sings this line that I love. The line is “Blow my friends off and then cry about being lonely.”

You have gone into the night and you have decided that you don’t want to be around people, you’ve called it off. But then you are alone and this song is about that lonely feeling; of wanting to push everyone away but also wanting to be wanted and being in that static middle.

Justin Barney: Alright Joe and Andy, what is one collective song that you can’t stop listening to?
Andy: “I Only Say I’m Sorry When I’m Wrong Now” by Cheekface.
Justin Barney: I love a title that just is a sentence. You already have a song. What is this band?
Andy: They are called Cheekface, they are a Los Angeles band.
Justin Barney: How did you discover them?
Andy: Through Twitter. They put out a tweet that was “Where should we tour” and I think Dylan from the Unitaskers said to come play in Milwaukee with us and Paper Holland. So I checked them out and I was like, this rules and then I just kind of fell in love with the song and the band.
Just in Barney: What do you guys like about the song?
Andy: It has a lot of familiar elements to it, that sort of remind us of Talking Heads.
Joe: I think there is a little Cake in there too.
Andy: There is a little Cake in there for better or worse. If you like Cake, if you hate Cake.
Joe: I love eating cake.
Andy: There is a lot of punchy guitar tones in it, a good production. It sort of reminds me of the first Darwin Deez’s album. It really jumps out.
Justin Barney: What is the song about?
Andy: It’s about only saying sorry when you are wrong.
Justin Barney: Does that mean that you never say sorry at all?
Joe: I apologize constantly. I am so Midwest, I just ‘ope’ all the time.
Andy: I do not embody this song, we are a walking ‘ope.’
Joe: I apologize to inanimate things.
Andy: I apologized to a door the other day.
Joe: I only say I’m sorry when — always.

4. Tyrone Miller picks “What If” by Amber Mark

Justin Barney:  I am here with weekend DJ Tyrone Miller. Tyrone what’s up? So what is one song that you can’t stop listening to.
Tyrone Miller: So there is no denying that I love some ’90s R&B and Amber Mark is a newer artist that has all of those vibes. If you watch her videos, listen to her music, it just takes you back to ’91, ’92 R&B. She has a new song called, “What If” and it’s just that same thing. But this one song is a little more dreamier, a little more soulful, she uses the strong points of her voice more and I just love it. It just takes me back right there the same way that her other songs have.
Justin Barney: There can be a trap in going back to R&B and going back to that time to just sound like music from that time. Does she do enough to not make it sound like she is just going back?
Tyrone Miller: For sure, I definitely think she takes some brand new elements of music now to make it sound very different. So like when she had that song, “Put You On” she had D.R.A.M. on there and D.R.A.M. is such a newer hip hop artist. So even though it feels ’90s R&B, it still feels now. So if it came out 20 years ago, it would fit and it comes out now and it still fits. She reminds me of VanJess or reminds me a lot of Zhané — the ’90s R&B duo. They just have so many newer elements to their music that it just feels good, there is a new energy to it. So I think Amber Marks bring that newer energy to the music, even though it feels ’90s R&B.

In 1967 Mort attended a demonstration from the inventor of the Moog synthesizer and it changed the way that he made music.

He started making these huge scores that were thematic and conceptual and in 1976 he released possibly his weirdest album of all time. It’s called “Mother Earth’s Plantasia, Warm Earth Music for Plants.” The album is not intended for human ears, but rather for house plants. Play this album to your house plants and they will hear it and grow healthy and strong.

It is a bong-rip of an idea, founded on mid-’70s idealism and an obsession of analogue synthesizers. This album got a re-release from last week and you bet I bought it.