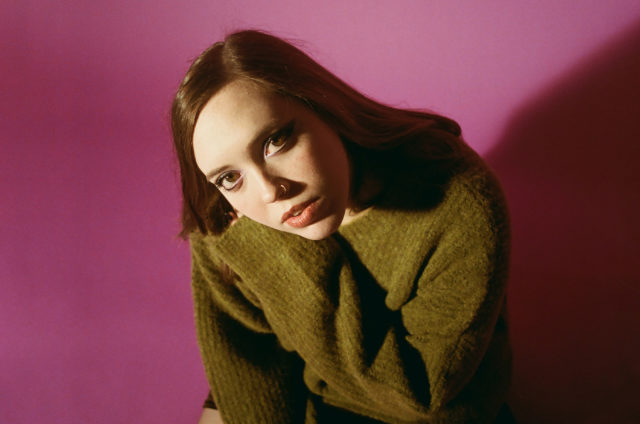 Sophie Allison started going by Soccer Mommy in 2015, when she was about to leave for college at NYU. There, she started playing shows and started making music officially as Soccer Mommy. Since then Radio Milwaukee has played and enjoyed everything she’s made. Her new album, “Sometimes, Forever” will be out on June 24.

Since we were playing “Shotgun,” I would like to talk about “Shotgun.” What were the events in your life that were going on that led to writing that song?

I mean, honestly, I was writing a lot at that exact moment. Despite everything, I’ve been in a very happy relationship for six years now. So, I was really just thinking about that and thinking about the early on, meeting someone. Especially, I was 19 at the time, so meeting someone in a crazy summer and having all these little things that make you love them even more.

Recounting some of the original things that, I guess, made you fall for them a little bit. Yeah, I just wanted it to be fun and youthful and upbeat and just feel like, I guess, that time in my life.

Is your partner Julian?

I saw in the liner notes, you have dedicated the track to Julian. I think that that is very sweet.

Yeah. I mean, fun to, I guess, make it ephemeral or whatever. Make it last. I don’t know, sometimes it’s nice to. I don’t usually put stuff in the liner notes really, but I don’t know, I think people should just more times, it doesn’t make it other people’s business still, but I think it’s a nice thing to be able to. For me, I was personally thinking of being able to look back on that and that being a sweet thing.

Totally. Also, I love that, because I love looking at the liner notes. I know that most people don’t and so it’s like a little secret that you kept there. It’s like, how many people will see that? Almost nobody.

Probably not a ton, yeah. Well, and for me, it was also, I remember years ago, before we’d even toured or anything, I had a seven inch that I think I also dedicated a track to Julian or something. I don’t know, I think it’s a nice little private thing to keep going.

It is, it is, yeah. I love that. It’s like I’m reading your little note, which is cute.

We talked when you released “Color Theory” and we talked about a couple of artists, one of them being Joni Mitchell. We talked and we talked about Bruce Springsteen and Hilary Duff, which I thought were great. Joni is such an incredible songwriter. I was wondering, what’s a songwriter that writes in the style that you aspire to?

I think I’m inspired by a lot of different styles. That’s a hard one, because I think you could look at certain songs of mine specifically, where it’s very poetic and crafted. Then, other songs, it’s like very just train of thought. Then, other ones are very crafted, in a way that I would personally say is less poetic.

I think lots of them were upbeat songs I write, even if I am happy with the lyrics and everything, they’re not as detailed. They’re not as like something you could write out and be really amazed by. I think there’s lots of different stuff. I value a lot of different types of writing. I think I value stuff like Joni Mitchell or even someone, speaking of this, like Springsteen. We were listening to a lot of “Darkness on the Edge of Town” in the van. A couple of us were really vibing it. The lyrics from that are just insane and they’re just nostalgic, but also very picturesque. They tell this story, you could make a movie based off of racing in the street or something. You could take that and it’s a whole plot. I’m really interested in stuff like that and I’m interested in stuff where you’re just spilling out all these things you think. Then popping it up into the song and that’s it.

I’m interested in pop writing. I think lyrics can be a little different, but I think people misinterpret the idea that, with a lot of people will listen to a huge hit pop song. Even something like a Max Martin song or something. It’s like, “Oh, these lyrics are so dumb.” It’s like, “Yeah, but if you have these really deeply poetic, long-winded lyrics, it’s not going to work. That’s not what this is.”

There is an art, in my opinion, to writing solid, upbeat pop lyrics that are still good and still hit you where they need to. Have these little calls too, just extremely relatable hooks and stuff. Where, even a song like Complicated, which we play every night before going on stage, there’s an art to having these things that people are going to think about.

One of those, for me, is “Pieces of Me.” That song, it’s just, yeah, they’re dumb lyrics, but there are all these moments that just hook you in and that make it unforgettable and make it that earworm. A song like “Shotgun” is, I don’t think the lyrics to that are bad, per se. I still crafted them in a specific way, I still wanted to do something special with them. But, the chorus is just this repeating thing. Part of it is you want to have a cool, interesting idea there to hook people, but also, literally, the cadence has to be good.

It has to be things like that. I think it just depends, there’s lots of different songwriting styles that I think speak to me personally. But, it just depends on the type of song you’re trying to make.

I mean, you know better than me, but I agree with you there.

I love those thoughts. My favorite line in Shotgun is, “Cold beer and ice cream is all we keep, the only things we really need.” Let’s go one detail further on that. What’s your go-to beer and what is your favorite flavor of ice cream?

Okay. So, this is a funny thing to talk about now in an interview, because I don’t drink beer very much any more. I do love it, it’s just trying to cut down on drinking a loaf of bread. But, so ice cream? I really love ice cream and there’s lots of flavors that I love there. I don’t like triple chocolate type of stuff.

I’m big on, there’s this Jeni’s flavor. I worked at Jeni’s. There’s this one that’s brown butter almond brittle, that one is absolutely amazing. I love a good mint chocolate chip.

I like a lot of vanilla-based ones, I feel like, because then you can get chocolate and stuff in and it’s not too much.

Me too. I got ice cream yesterday and I was explaining to my friend that my most controversial food opinion is that I think chocolate ice cream is overrated.

I think my most controversial thing is that I think that strawberry ice cream is disgusting.

Wow. That is a hot take.

I think fruit ice cream in general, it should just be a sorbet. I don’t know why there is milk in there with it.

Especially strawberry. That’s the same thing with, I didn’t like milk growing up. I would only have chocolate milk. People who’d have strawberry milk, I was like, “Oh my god, that’s horrible. That’s like just a chemical mixed in with your milk.” I just think that kind of stuff is gross. I didn’t even answer the beer question.

I think my favorite beer, I’ll make this one faster. We really like Coors, that’s a solid. But I like light ones, like Bud, Coors. If we’re going to like an actual place to buy it, we love Beerlao, which is a Lao beer, I guess it’s a lager. Just stuff like that. Lots of Japanese beer. Lagers are really good.

I would like to end with a music question, because we’re going to go into a song after this. I would love to know. I’d like to do what song is on pause on your phone right now?

Oh, this is going to be embarrassing.

Oh, my god, it’s embarrassing. It is, “How Does it Feel” by Avril Lavigne. Which is really funny, because I have not listened to that in-

years. I popped it on yesterday, going to the grocery store.

Honestly, because before we go on stage, we have a walkout song that’s just ambient stuff. But, we’ve been playing Complicated did before that. Todd, it was always just so fun, because people would start singing and I could hear it through my ears.

Todd would do a dropout and you’d hear everybody singing the chorus and he’d come back in. I was talking to someone about that and then I was driving and I didn’t know what to put on. I was like, “You know what? It’s been a really long time since I listened to one of these albums.” Popped it on.