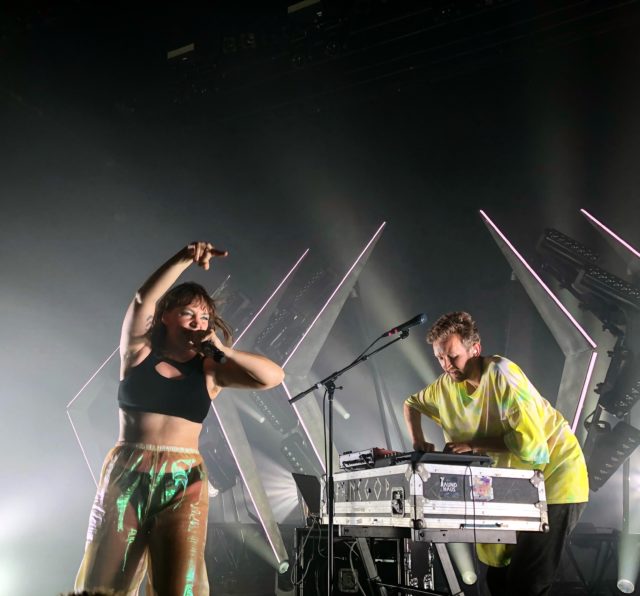 My guest today is Nick Sanborn and Amelia Meath, who are Sylvan Esso. Sylvan Esso are one of our favorite bands. Nick Sanborn was born in Madison and spent 11 years in Milwaukee where he met Amelia Meath at the Cactus Club. They’ve released two fantastic albums and just last week they played two sold-out shows at the Pabst Theatre. In between those two shows, they stopped by to talk to me. Returning to 5 Songs is Sylvan Esso.

Justin Barney: Nick Sanborn and Amelia Meath, what is one song you can’t stop listening to?

Amelia Meath: I know, because she has a phonetic spelling of it on her instagram. And she is an actual pop queen from Sweden who is writing…just, bangers. And people are starting to pay attention to her.

Justin Barney: –not pronounced, but I’ve read it.

Amelia Meath: She just put out this EP called “Sway.” Each song on it is incredible, but I think–

Nick Sanborn: Which one are you going to pick?

Amelia Meath: I don’t know, dude. I’m, like, into each one of them.

Amelia Meath: I’ll just say, “Say My Name.” The economy of the words in the song is just incredible. It’s something that I truly aspire to. The hook is, “Say my name. Wear it out like a sweater that you love because I can’t get enough of you.”

Nick Sanborn: Yeah, I think something me and Amelia talk about all the time is making pop music that doesn’t dumb down the human experience.

Nick Sanborn: I think she does a pretty amazing job of that. She writes legit stadium-sounding pop songs–

Nick Sanborn: –that talk about complex — like trying to figure out if you like somebody. You know, it’s good.

Amelia Meath: She’s also figured out that the subject matter is always like: I have a crush on you.

Amelia Meath: Which I try to avoid.

Nick Sanborn: Yeah, but she goes for it and does in a way that feels real.

Nick Sanborn: Which is fun. I don’t know, it’s great.

One song I can’t stop listening to this week is “Quiet Village” by Five Glow Tones. The other day I was in Rush Mor Records in Bay View, and on the wall they had a new release from the Numero Group. The Numero Group is a record label out of Chicago that I absolutely love. They’re a re-issue group, and they do really, really well-crafted, well-researched compilations of specific genres, specific times or places, and everything is just super, super well-done.

So I saw this one up on the wall, and it was Numero Group Number 65, Technicolor Paradise: “Rhum Rhapsodies & Other Exotic Delights.” And there was a description of the record in the corner, and it read as such:

“It was a musical cocktail born in a marketing meeting: Two parts easy listening, one part jazz, a healthy dollop of conga drums, a sprinkling of bird calls, and a pinch of textless choir. Serve garnished with an alluring woman on the album jacket for best results.” Liberty Record co-founder Simon C. Waronker called it exotica—“the soundtrack for a mythical air-conditioned Eden, packaged for mid-century, tiki torch-blazing armchair safariers.”

I had to get it. And I’ve been playing it ever since. The thing that I love about this genre and this release is the music’s pure “there-ness.” It’s hardly anything at all, and for me it’s perfect to just have on. It’s not too much, it’s not too little, it’s just in the back. That is just the allure of Exotica, is it’s perfect banal there-ness. This song “Quiet Village” was released by Five Glow Tones in 1951. Nobody even knows who the Five Glow Tones even were, but they released this and this song became the template for what was the short-lived genre that came to be exotica. 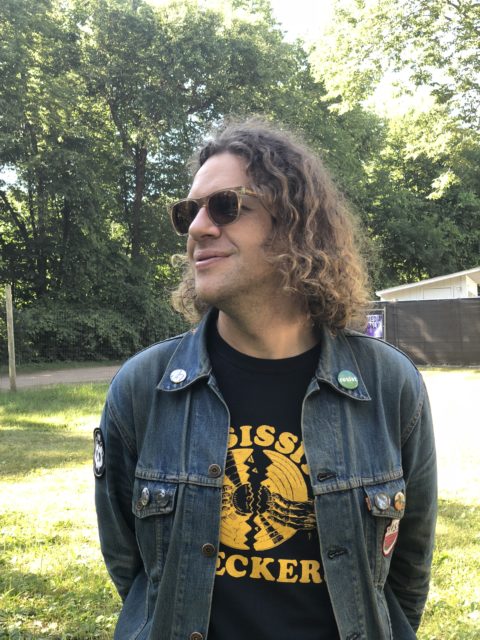 My guest today is Phil Cook. Phil Cook is a musician who now resides in the Raleigh, Durham area. He used to be in some groups with Bon Iver, Field Report and Nick Sanborn from Sylvan Esso. He just released a new album called “People Are My Drug.” We are playing “Miles Away,” a song featuring Sylvan Esso’s Amelia Meath on 88Nine. We had this conversation backstage at Eaux Claires Music Festival.

Phil Cook: I’m a really big New Orleans music buff and historian and have visited the city many times. Really, really into the culture there. Into the bands, from the history of the bands to the modern bands that are there. All of it. It’s really where my heart is, so, yeah, I’ve found some really cool stuff. So I was at a festival and recorded on my phone, at Jazz Fest, it’s in New Orleans.

Phil Cook: End of April. It’s the 49th year of Jazz Fest, almost 50 — next year is 50. Anyway, I happened into a tent and just saw this mother and her two daughters, it was like a vocal trio with a full 10-piece band and it was just the purest music that I have seen for years. And I see music all the time.

Phil Cook: I just saw this group, they were called Topsy Chapman and Solid Harmony. And they just did this really incredible version of that old hymn, “I’ll Fly Away.” And I recorded it with my phone, and I’ve listened to it probably 100 times.

Justin Barney: That’s amazing. What is their name?

Phil Cook: It’s the source, man. It’s the source of the brook. The fountain of American music that has given life to everything that’s come in its path, and that same fountain that actually changed the entire world — the culture of the entire world and the cultural landscape of people from the other side of the planet. Like, changed everything. All came from New Orleans.

Phil Cook: When you realize that, as an American citizen, you find something that you can tap into that is beautifully American and that is beautifully something you can be prideful and passionate about, and something that will connect you to people that are not from here, because it is truly the most — it is the greatest gift that I think America gave the world. So you find all of that living and breathing in people in New Orleans still today. You still feel that spirit, all the things about it. It’s a magical place.

Justin Barney: I love it. Perfect!

Justin Barney: I’m here with afternoon host Ken Sumka. Ken, what are you listening to?

Ken Sumka: Well, I recently read this article in Mix Magazine, it’s one of those magazines you’d see in a recording studio, it’s like the geek trade publication for producers and mixers.

Justin Barney: It doesn’t surprise me that you would pick that up.

Ken Sumka: And so there’s this article, which I hadn’t seen before, about the making of “I’ll Be You” by the Replacements. And this is their third album at this point and they still had nothing resembling a hit. And they had this song “I’ll Be You,” which Matt Wallace came on board — he was like the third producer, they’d fired one and one guy quit because he just couldn’t work with the band — and so he heard “I’ll Be You” and he said to Paul, “I love this guitar part, let’s tune up your guitar and get it better.” Paul said, “F*** you,” and then he thought, “You know, I know Paul is a big Sinatra fan, we’re gonna do the vocals at Capitol Studios at Hollywood and Vine in Hollywood, I know that he’ll love doing that.”  And sure enough, Paul is psyched about using the reverb plates at Capitol Studios.

And then he has the suggestion where the song in the third verse modulates down an octave, and Matt actually suggested to modulate up an octave, which puts Paul in the upper part of his register. So in the third verse, right after they come out of the solo, he hits these notes, but you can tell that his voice is a little strained because it’s kind of out of his register. But it adds this element, not only the modulation is great, but you can hear him kind of straining to hit these notes and words, but it just added this cool element.

I’ve known this song for almost 30 years, and just hearing a new element about it just makes me — now I’ve been listening to this song obsessively for like a month because I know this new information about it.

For the final song this week, I can’t stop listening to “Ache” by Trevor Powers. You might be familiar with Trevor Powers’ former project, Youth Lagoon, who made really pretty and cinematic music in the mid to late aughts.

A couple years ago, he dropped that project because he said he felt a pressure from it, which I totally get.  I mean, if you’re a musician and you have an audience, and you’re making new music, and you feel that it has to reach some kind of expectation or be a certain thing, I totally get that. So he dropped that Youth Lagoon project and now he’s just going by his birth name, Trevor Powers.

He’s released a series of singles, this being my favorite, “Ache.” It’s much different from the Youth Lagoon stuff because that was pretty and soft, and kind of more vocal-centric, and this song “Ache” has these percussive patterns that are really deep and really just groove-heavy and hard not to like, and just kind of bangers.

Really digging this new project from Trevor Powers, who was formerly of Youth Lagoon and now is just going by Trevor Powers. This is “Ache.”