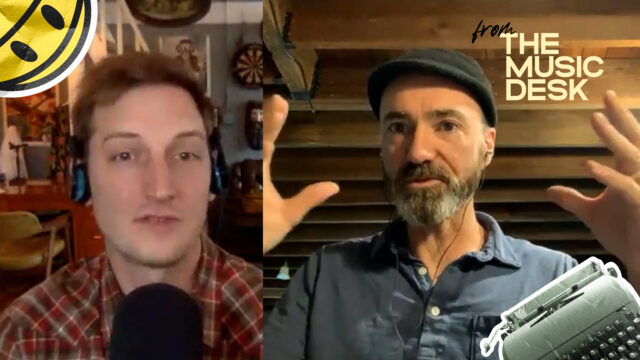 James Mercer is the lead singer of The Shins, a band that has gone through many changes in its 20 year existence. And although its lineup has changed many times, in this interview, I think the most interesting subject to come up was James Mercer’s reverence and true appreciation for his longtime friend and occasional collaborator Neal Langford He talks about their friendship as one that could shut out the world. Mercer says that it’s the kind of connection brings us together in this great divide.

Watch or read the whole interview below.

Congratulations on “The Great Divide.” We started playing it the day it came out. I love it. It’s great.

Thank you very much. We worked hard on it and had a lot of fun doing it. It’s great to hear that you guys like it too.

Let’s talk about the song. There is a great division in politics. Is this song about the great political divide?

Oh man, I wish I could say it was. It’s a sad fact that I am not a very politically minded person. I like to think about the overarching philosophies that end up being people’s personal politics, but the human aspect of it is what I’m bored by. That’s the part I’m not into — the sort of soap opera that it becomes. In my head, the song’s really about two people finding themselves in the midst of a sort of crazy world that’s outside. I’ve had this experience where you find someone who’s simpatico with you and you just kind of feel like this connection is so strong, that it’s us against the world. And then the influence of this crazy pandemic was filtering in a little bit too with that. I imagine finding someone like that and then the world just changes around you.

That’s a wonderful statement. What did you study in college, James?

I went into college not knowing what to do. My dad told me that the best thing you should do, the thing that’ll make you the most money, is being an electrical engineer. I quickly realized that I do not have the aptitude for that.

Why did your dad steer to electrical engineering?

Because he read it in Forbes magazine or something. It’s just practical. He’s an air force dude. Anyway, engineering didn’t work, but I didn’t have the sense at that point to just admit the fact that I was a humanities guy. I was interested in history, and I was interested in writing. I should have done that, but instead I got into chemistry and did pretty well. I just couldn’t picture myself living the life that that was leading to. I struggled with motivation. I felt like J Mascis says, ”Everybody sees a target and I see nothing.” There was no place I was headed to that looked attractive to me. So, I started concentrating on playing music and having a social life, which I found through music. I had the idea that someday I was going to figure it out, that I’d go back to university at some point and finish this degree. But, instead I got signed.

I had the same kind of thing. My dad saw what he wanted me to do on a billboard as he was driving to work. That’s the laziest thing in the world. And then I did the same thing where it took me a long time to separate the practical thing and be like, “I enjoy humanities. I like learning about the world.”

Yeah. My dad probably figured that was just weak. He’s a proper dude.

A big part of that, for me, was finding the right friends. Was that a thing that helped you figure that out?

Yes. There were some really influential people who were into music and knew a bunch that I didn’t know. I had stuff to show them, and we were fascinated by rock and roll, and bands and the whole thing.

Were you different in high school? Did you change as you went to college?

I was extremely shy, even through college. I didn’t really come out of my shell until this buddy of mine, Neal Langford grabbed my hand and pulled me on stage to get me to sing. He knew I could sing okay just from hanging out and singing to the radio. He really helped me. That’s when I started to push the boundaries of this whole thing of being coy.

Has it been difficult for you being naturally shy to have to be in front of a crowd?

Yeah. That’s the part that drives me nuts, is the having to riff on the crowd. Sometimes it comes naturally, but if there’s any pressure for me to, it’s very difficult for me. I am not naturally somebody who would be on stage. I think it kind of shows, which bugs me too. When we’re playing the songs, I’m enjoying myself, for sure. It’s just those awkward silences that can be a pain in the butt.

I’m not a natural people-person either. But doing things like this has helped me mesh with people, or to know what to say, or crack a joke.

It’s the subtle art of small talk that’s really undervalued. I know how valuable it is. I’ve got friends who are terrific at it, and I envy them, because it is a wonderful thing to be able to talk to anybody.

Back to “The Great Divide,” there’s a line in the song that interests me: “The blind collective mind of man is all they’re offering.” I’m always interested in knowing who the “they” are.

That’s what I was talking about earlier. When you hook up with somebody, I’m thinking of this friend of mine, Neal Langford, at the moment. We just really got solid and it was like us against the world. We wanted to start a band and all this. I guess the “blind collective mind of man” would be the world outside of our special little conspiracy. I do that stuff all the time. One verse I’ll take from a relationship like with Neal, but then it’ll be put into the context of two lovers talking to each other. I use whatever I can to collage a story together and let it be ambiguous enough that somebody can find a narrative in there.

I love this friendship with Neal Langford. It seems like you have a real fondness there. What do you like about him? What’s his signifying characteristic?

He was just the coolest kid I’d ever met. He dressed super subtly, just the coolest way you could do it. Beat-up Doc Martens and jeans with the cuffs, back in like 1989 or 1990. He was into a lot of great music and turned me on to cool stuff. I had just moved back to the States from England. I was into My Bloody Valentine, and The Stone Roses and things that were kind of in the underground over there at the time. He just was blown away by that. We had this real trading of ideas back and forth. He was a sweet kid and  a cool guy. He’s still living out in North Carolina with his partner, and he’s doing great.

That’s awesome — finding someone and shutting out the world like that. Do you think that’s why you have done so many collaborations lately?

It is. I collaborated with my old band Flake. Then I did The Shins, and I really found myself enjoying working alone. I got kind of tired of that, and I had the itch to work with somebody else. Then, Brian Burton came along, and we did Broken Bells. Recently, I think because of the confidence I got from working with Brian, I want to loosen up a little bit and not be so precious with my songwriting. So, Jon Sortland our drummer in the band, he had this thing he had done on his iPhone in GarageBand using a synthesizer. He had this part, and he put a little beat on it, and I started singing to it because that’s what I do. I started humming and riffing until it was cool. I brought it up to him and said “Let’s make this a Shins song.” That’s the beginning of that, which was actually a couple of years ago. It’s only recently we finally finished it and got it all sorted out.

With the one song out, is this part of a greater Shins project? Will there be an album?

I ask the same question. I’ve got a bunch of backlog material. I’ve got songs that I have not recorded. There’s certainly an album there that we could do. It’s difficult to do right now — not being able to get together and have an engineer around. It’d be something to overcome at least. The other thing is we’d release a record and not tour it, which I’ve never done. I just don’t feel that there’s that impetus to really work hard on a record, and I’ve got three daughters that are in Zoom school.

Good for you. I wanted to ask about what you’ve been listening to recently.

It’s getting the Fleet Foxes back into your life! It’s great, because it’s really classic stuff as always. I’m always impressed with those guys.

Every time that I hear them, it feels like a statue that they had carved out and it’s been there for centuries.

I do see what you’re saying. It’s so refined and elegant. They’re masters now. I love that it was recorded all over the world too. There’s something really rock ‘n’ roll about that.