Tim Heidecker might not be joking in his music, and is not joking about the Beatles

Tim Heidecker might not be joking in his music, and is not joking about the Beatles 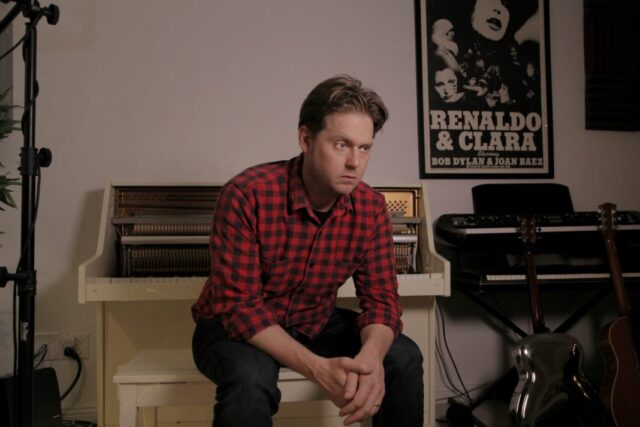 Tim Heidecker is a funny guy. He’s most notable for his show “Tim & Eric” though he has done an incredible amount of other work as an actor and comedian including a new series on Showtime with Fred Armisen and John C. Reilly called “Moonbase 8.” In addition to that he has also made a bunch of really good records. He grew up listening to his dad’s music which he described as, “so boring” more so because it was standard classic rock than actually boring because it’s still the music he obsesses over. He buys every Beatles book and sees the larger narrative in the relationship between, in particular, John, Paul and Yoko. We get into that and a bit more, finishing with a message about Nov. 3 in the interview below.

I’m excited to talk about music with you. I’ve only got two songs from “Fear of Death,” and they are so great. You collaborate with Jonathan Rado, and Natalie Mering from Weyes Blood. I was so glad to see them on this record. Why did you choose to work with Rado?

Well, he produced my last record, “What the Broken-Hearted Do.” I’ve known him for a while. We’ve tried to do various projects together. He really looks up to Richard Swift, who’s kind of his mentor, and really believes in that old style of production; analog, tape machines and playing live with other musicians. We share a lot of similar musical tastes. He’s a great player too. He’s not the prime producer on this record just to clarify. This was really me, Natalie and a guy named Drew Erickson.

How did you shape the sound of “Fear of Death”?

I had a file of songs, and I kind of write in a certain style — very ’70s singer-songwriter.

Why do you think you do that?

Well, I love that kind of music. I’m not trying to make anything else. It’s just what comes out of me. We recorded the album at this really great place in Los Angeles, in the valley, called Valentine Studios. It was a studio in the seventies that got boarded up, and then unboarded like five or six years ago. It feels like you’ve gone back in time. It’s a little bit of a goosebumps thing. You feel like you’re in ’74.

On “Fear of Death,” I really like the two songs that are out. I really love them lyrically. You are notably a funny guy. When you play these songs, I think there’s an expectation that a joke is coming. But what you’re saying is so true and bare. Where is the line between funny and serious?

I think there’s some humor in the lyrics, more of like a gallows humor, the way that, you know, Randy Newman or Paul Simon are very funny a lot of the time. So if I’m singing something like, you know,  “I’m on my third tequila on ice, and I just said hello to the same guy twice,” I mean, that’s a funny line. But it’s also an experience I had. So it’s a different kind of humor. I think there’s room for cleverness and irony in serious music. I wish there was more of it in music. But there’s Father John Misty, and even Bill Callahan and Kurt Vile too.

Right. You can’t say something meaningful without having a drop of humor there. It makes the sentiment come through better.

Yeah. I mean on “Nothing,” what I thought was interesting about the song was that I could take some very big existential ideas and contrast that with very mundane middle-of-life experiences that aren’t as profound.

For sure. With “Nothing,” is that what you truly believe?

Probably. I consider myself agnostic. I don’t think I have any clue really what the hell is going on out there. I feel it’s a little crazy to have any kind of firm conviction on that, but I guess my personal little philosophy is that, God, or any of these kinds of things outside of the physical world, are defense mechanisms against our own intelligence. In other words, if you really go down the rabbit hole of investigating why you’re here, you realize it’s not a positive thing for the species to just to keep surviving. You create a mythology — create a meaning to propagate the species– which is a very dark view of existence. We’re just so genetically programmed to not dwell on that. I still find meaning in my life. I still feel for people. I still love things. I still enjoy things. I think that’s just a chemical genetic disposition for the species. You can sing about it, but I don’t pace around my house wallowing.

I think that’s why the song really works.

Somebody mentioned Natalie’s voice on it. It’s so beautiful. There are all these angelic harmonies. Someone said that her voice almost contradicts the meaning of the song, because the proof of God is in its beauty.

That’s a great observation. How did you figure out that you and Natalie get along?

Well, I have a podcast that I do called “Office Hours.” Natalie came in. I was playing her a demo from “Fear of Death,” and it was like– we should do this.  I’m very bold on that show. I’m super confident because it’s those super powers of being on air. Drew Erickson, who is a really beautiful piano player/arranger/producer, heard that and knew Natalie. He said, “Well, if you guys are around next week, why don’t we all go in the studio and try to record that song? And The Lemon Twigs are here and Rado is gonna come by, and Stella from Warpaint is in town.” He assembled this wrecking crew out of the blue. We just went along with it.

Well, that’s the beauty of LA. Everyone is there. Are you and Natalie friends outside of music?

Oh yeah. I mean as much as you can be friends with somebody during the pandemic. I have a family, and I don’t really see anybody.

Natalie is extremely talented, but she’s very down to earth. And, she’s from my part of the world. She’s from eastern Pennsylvania. I feel like she’s somebody I would have been friends with in high school.

For sure. What’d you listen to growing up in eastern Pennsylvania?

I was a huge Beatles freak and I still am. I have an endless fascination with them and buy all the books and watch all the movies and everything.

I love when people are obsessive fans of something like the Beatles, because then you have strong opinions about them. I know this could change all the time, but what’s your favorite Beatles record?

It’s very hard. They’re so different. “Revolver” and “Rubber Soul” are masterpieces, but I also love going back and listening to “With the Beatles.” There’s just that pure, raw energy that they have in that record where you can feel their confidence is exploding off every song. They’re clearly really into playing together as a band. The later records to me feel a little like they are all sidemen on each other’s solo projects, as they’ve said before. But, I just love it all.

What is your favorite Beatles song?

We could talk about “The Ballad of John and Yoko.” What I love most about the Beatles is that their story is almost biblical. This song is so neat, because it’s this great autobiographical look into something that was happening when it was recorded. If you really drill down into the core of it, it is about this relationship between John and Paul. It really is their band. I love George Harrison and I love Ringo, but John and Paul’s relationship is the most fascinating part of The Beatles to me. The fact is that those two guys went in the studio together and made it just the two of them.The rest of the guys don’t play on that song. It’s John, and Paul plays drums. There’s outtakes of that, where you hear them collaborating, and laughing and kind of goofing around. And just to hear that, and know that this song that’s about John and Yoko’s breakup, is almost really kind of about the breakup of the Beatles, and how John is leaving Paul for Yoko. Just to have Paul participate in that? There’s so much richness there, and it’s a great tune. It’s really smart, funny, and it’s super catchy. So that’s my song.

Wow. Including him into the breakup as part of the song — that is biblical.

Yes. So, I am Wisconsin. Wisconsin cast three million votes in the last election, and it came down to less than 23,000 votes. We are an important swing state. What do you think about the importance of voting?

I am a passionate, avid anti-Donald Trump person. I’ve been for I think eight or nine years. I don’t think I’ve ever felt warmth towards him, but certainly it’s gotten colder and colder. You gotta vote. I’m a very left wing guy, and Biden’s not my first choice, or second or third choice out of that field that ran. I was supportive of Bernie Sanders. But listen this is a zero-sum game. It’s a binary choice. There will be a time to go back and fight for the things you believe in, and you can continue to do that. Voting is the very least you can do here. It doesn’t mean you’re voting for your best friend. It doesn’t mean you’re voting for the perfect person. But, we gotta get this guy out of there. If you’re not a Joe Biden fan, for whatever reason, you gotta eat your spinach here. The next day we can talk about pushing him to do all the things you want him to do. And, and that’s my message.