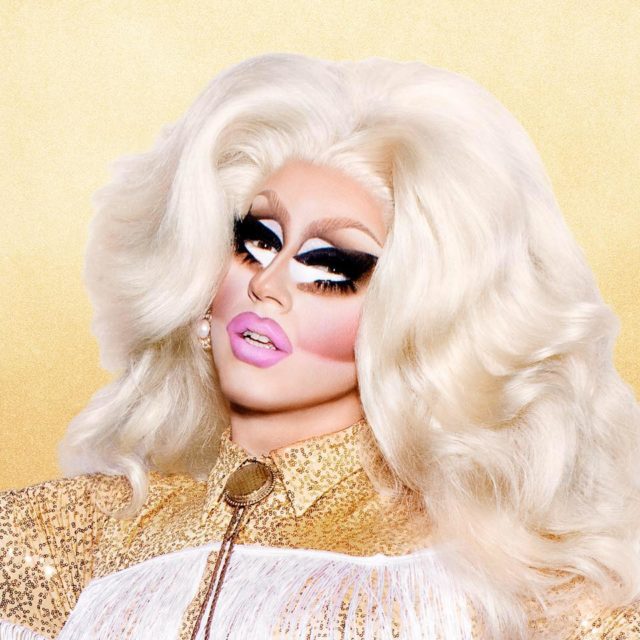 My guest today is Trixie Mattel. Trixie is the biggest drag queen In the world. You may know Trixie from “RuPaul’s Drag Race,” or “Drag Race All-Stars,” which Trixie won.

Trixie is also releasing a new album this year and is going to be in Milwaukee tonight, bringing all the talent to Turner Hall Ballroom. Trixie called me from a 414 number.

So Trixie, I am wondering, what is the last song that you couldn’t stop listening to?

I recently fell in love with this band that everyone knows about but me called Hole. Are you familiar with Hole, Courtney Love’s band?

Okay, I never grew up listening to “Live Through This,” which is a lot of people’s favorite album, favorite grunge album. I recently found Hole and I listened to their album “Celebrity Skin” that has like “Malibu” and a bunch of their hits on it, but they have this song on that record called “Boys On The Radio,” oh my god it’s beautiful. It’s this pretty song. It’s kinda just a song about the rock ‘n’ roll boys that she falls in love with and how ultimately doomed the relationships are with people who are performers. It’s so pretty and it sounds like summer and being a little drunk and kissing someone you think is hot. And it has this like, blind-willing sort of like “I would do anything for you, I’m that kind of crazy about you” feel. “Boy On The Radio,” Hole.

It’s not one of their hits, but anyone who likes that band, it’s their favorite song by them. Does that make sense?

This thing happens every once in a while, it happened with me and the Flaming Lips last year. Everyone in the world knows that band, and like Hole, I don’t really know a lot about Hole. I’m not really a fan, but music is not linear and suddenly you discover a band that you feel like everyone knows about but it’s new to you and it’s such a fun discovery for you.

Yeah, I love them. What’s funny is,  I was calling my friends, “Are you familiar with this band Hole?” and they’re like, “Are you kidding? Everyone knows Hole.” Like every gay person grew up worshipping Hole. Right, that album “Live Through This”  was like a lot of gay people’s like… they loved it when they were younger. When they felt weird, and this album is so angry, and feminine and sexual. And I only knew Courtney Love as we knew her in the Zeitgeist which is this kind of, like people say she’s an adulterer and a murderist and a drug addict. And I didn’t know her music, truthfully.

It just sounds dirty, grungy guitar music that still has a bubblegum feminine edge. I just love it. I love it.

That is so wonderful. I listened to an interview with her the other day. It was just a clip. It was a clip of her saying something about Harvey Weinstein back in the day. She was this punchline for a while where she was just easy for macho media to make fun of because she was a woman who was going against the grain.

The narrative was real easy to be like, “Oh, let’s just take a swing at her or something.” Now, I’m glad that you’re bringing this up because it’ll will make me listen to it, who I’ve never gone through a big phase or something like that. But I think it must have been so difficult for her to always be a punching bag or to be easy to criticize when it seems that if we go back through history, she was right all along, and she should be regarded a lot higher than she … Or treated better than she has been.

Also in Hollywood and in music, we give male drug addicts almost like a godlike status.

They’re so troubled. They’re so broken. They’re so complex and artsy. They’re coping. We treat women with mental health or drug issues like garbage.

Like Hollywood trash. You can hear that a lot in her record and Celebrity Skin that opens … That song, Celebrity Skin, that’s literally being like, “Yeah, I’m famous and you all say horrible things about me. Welcome to the show.” You know what I mean?

It’s like Anna Nicole. She hosted, presented the VMAs slurring her speech and nobody would step in. They would just laugh at her. That’s her whole thing and that she’s a mess.

You know? We don’t do that to men the way we do to women. Anyway.

Not at all. We glorify that. We say how great, what a renegade.

Until someone dies and then they’re a god.

But until you die, you’re a mess and you are garbage and you can’t pull it together. There’s also the fact that Courtney Love, she’s not the best guitar player. She is not the best singer. I can certainly relate to that. It was their presentation and the performance and the attitude. The fact that she’s up there in lingerie with no panties on in this mop top screaming, very in your face in a way that people maybe weren’t comfortable with. But that album sounds like it was made yesterday.