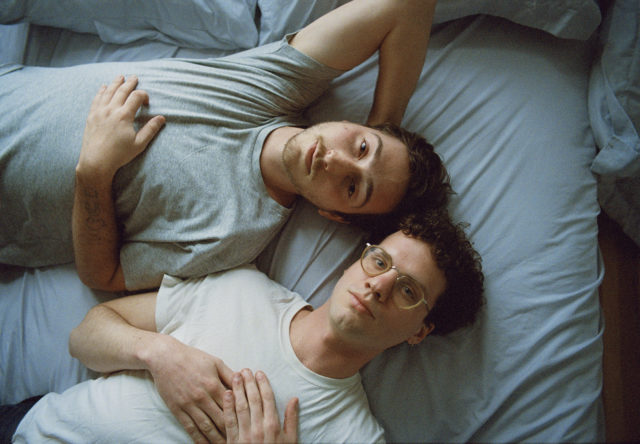 My guest today is Julien Ehrlich of the band, Whitney. Whitney is made up of Max and Julien, they’re from Chicago, and in 2016 they released a fantastic album, “Light Upon the Lake.” Earlier this year, they released their sophomore album “Forever Turned Around.” Whitney is playing in Milwaukee tonight at Turner Hall Ballroom. Julien plays drums and sings in the band. My guest today is Julien Ehrlich, of Whitney.

Julien, what’s the last song you couldn’t stop listening to?

I think I’d have to go with “So Long Marianne” by Leonard Cohen. Because I just watched that documentary “Leonard and Marianne: Words of Love.”

I saw that it’s out but it didn’t come to Milwaukee. How was the doc?

I was conflicted about it. I also got into Leonard Cohen kind of late, but I am a huge fan.

He’s a great guy, but there seemed to be a lot of womanizing going on. Their relationship was super intriguing and it also goes into how the original lyric was, “come on Marianne,” instead of “so long Marianne,” which is an interesting nugget into the songwriter’s head.

I would recommend the movie though, it’s definitely a tear jerker.

The fact that he would start a bunch of relationships and never let anyone fully in. Basically he would just break a bunch of hearts. Which, due to the nature of his creative journey, I understand. But how much of it is self-centeredness, or being on a creative journey, or just wanting to feel loved by tons of different people?  Which is also just a part of being a musician, wanting to make a bunch of people happy and connect with them during shows. The more I think about it, that’s just who he was.

He came up in mid to late ’60s and living in that era, he talks about this in the movie too, where he was like “Basically my appetite suited the moment and time,” and it was ’69, so I guess he was right.

It was just a strange film. I liked it though. I think I like it more after talking about it.

Why “So Long Marianne” then?

It’s an incredible song. The backing vocals are A plus plus, and typically incredible lyrics. Just good vibes.