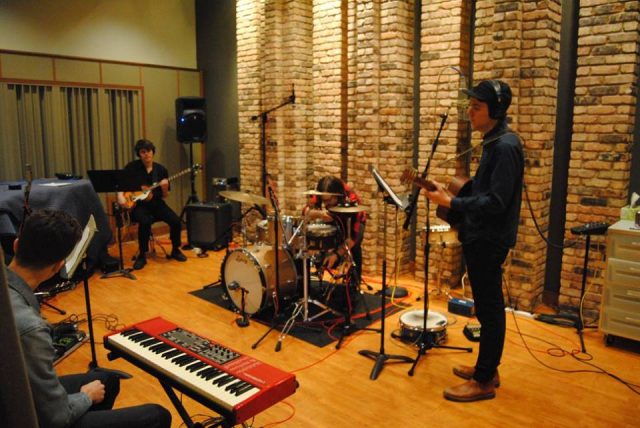 In late March, Journal-Sentinel writer Jim Nelson wrote a piece detailing a handwritten ‘song’ a young (20) Dylan wrote in New York, which failed to sell at auction. When considered among Dylan’s canon, it’s a lightweight song, even corny in spots, but to Wisconsin residents, it’s notable for its references to Milwaukee, Madison and Wauwatosa. Wauwatosa even becomes ‘Wow wow toaster’ at one point.

When the article posted, my first thought was to reach out to Trapper, and see if he would be up for writing a melody around the Dylan lyrics. He was already on the same page and within an hour, he texted me back with a demo he’d recorded in his living room on his piano, even adding a chorus the song lacked, which borrows a bit from the Wisconsin Fight Song. We agreed that it was worth recording and Trap reached out to Daniel Holter, who owns a recording studio–Wire & Vice–in Wauwatosa’s village and an idea was hatched.

He booked Wire & Vice for Sunday April 9th and Trapper assembled a band to record a melody around the Dylan lyrics. The players–comprised of musicians who’d recently recorded a concept record Schoepp wrote about Green Bay’s Bay Beach amusement park, due out this summer–convened at Holter’s studio and in the course of an afternoon, recorded all the parts for “On, Wisconsin”. To keep it all in Tosa, even the catering was handled by Metcalfe’s Market, just up the street from Wire & Vice. With a final mix decided on by all parties, the song was completed on Monday. The song presented here went from newspaper article to completed song in a mere 11 days and everyone involved donated their time to the project.

Listen to “On, Wisconsin” performed by Trapper Schoepp:

Our own Vianca Fuster was on hand all day to capture the action on video. Here’s a video encapsulation of the project and how it came to fruition. Special thanks to 88Nine’s Vianca for her videography/editing.

Watch the video below: