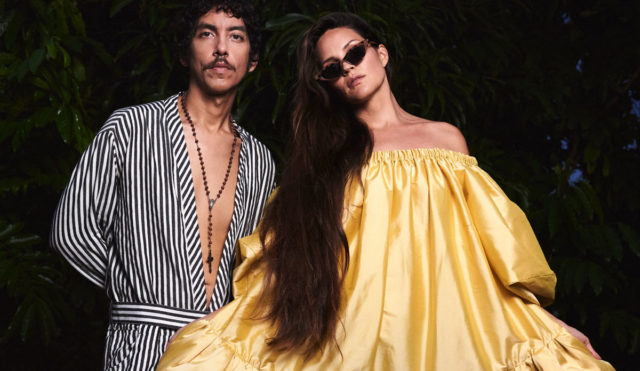 Buscabulla is a Spanish-language experimental pop project helmed by Raquel Berrios and Luis Del Valle. While both were born and raised in Puerto Rico, it wasn’t until 2011 while living in NYC that the producer, designer, songwriter, and DJ Berrios teamed up with producer and multi-instrumentalist Del Valle.

Together they formed “troublemaker,” or “Buscabulla,” as it’s known in Puerto Rican slang. Buscabulla’s debut EP was co-produced with Dev Hynes (aka Blood Orange) and subsequently released on the Kitsuné Musique label in 2014. Buscabulla’s second EP, II, was self-produced and self-released in January 2017.

Regresa was recorded in its entirety in Raquel and Luis Alfredo’s home studio in Puerto Rico, and is an emotional roller coaster in which they face and ponder the issues affecting them and Puerto Rican society at large: the frustration at the lack of opportunities for locals while tax breaks lure rich investors, self-doubt and anxiety, even the rise of religious fanaticism. Full of angst and an underlying sense of loss, Regresa — which means “return” or “to come back” — is a bittersweet, introspective, eye-opening journey.