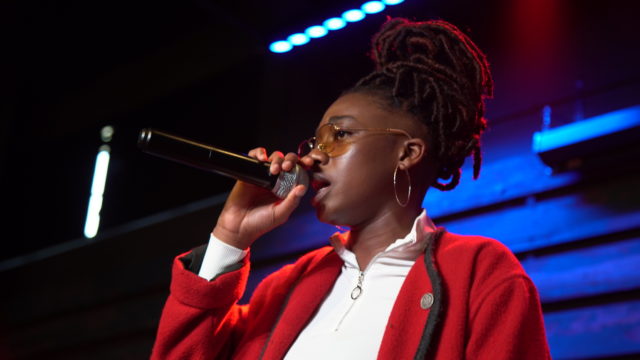 Last week, Rhythm Lab Radio favorite Little Simz stopped by our studio before she kicked off her North America tour for performance and interview. She is touring in support of her latest album “Grey Area.” You can listen to the session on the latest episode of Rhythm Lab Radio. Below you can watch her perform with DJ OTG, and read part of the interview.

Tarik: Your new album is called “Grey Area.” It’s a follow up to your last album, “Stillness in Wonderland.” Can you talk to me, how did you grow as an artist between that album and the new album?

Little Simz: I think I got to a place where I found myself in this area that, I don’t know, everything just felt different this time around, everything. I think I was feeling so many emotions because of me being super ambitious and feeling I’m not where I want to be, but then I look at my peers and I’m thinking should I be doing what they’re doing? It was just a place of pure confusion, and that’s kind of where it started and I got into a studio for a producer called Inflo. He’s also from London; I’ve known him since I was nine, so we already had that chemistry. When we got in the studio, he just kind of pushed me to tell more of my story and more of my truth and let people in a bit more.

Tarik: I read somewhere at age 9 is where you began your musical journey, so what was the inspiration? What did you see, what did you hear to say, “This is what I want to do?”

Little Simz: I’ve always been a performing arts kid, so whatever that’s dance, music, acting, I’ve always been naturally drawn to the career of arts. From 9 years old, you know, I didn’t know this was going to be my life or my career, I just knew that I loved it, and I enjoyed it, and it made me happy, and I was fortunate enough to have a family that encouraged that and helped nurture that talent. By the age of 14, is when I think I discovered that was like, “This is me.” I can’t see myself doing anything else and I end up in Milwaukee.

Tarik: On my show Rhythm Lab Radio, I spin a lot of music from England, specifically from London, and looking from the States, the scene in London from the last couple of years seems to on the rise, especially in hip-hop and jazz. Do you feel that way or has it always kind of been like that?

Little Simz: No, I agree. I think now, especially, I feel like there’s been a shift of some sort. It feels like there’s a lot more eyes on London, on what’s going on over there. The scene is very strong, we have some super great talents that are coming out from there, so it feels great to represent it as well, and me coming to the States and fly the flag, you know?

Little Simz: Everyone kind of knows each other, so it’s literally that strong sense of community. It’s not a problem to just reach out to someone and being like, “Can you help on this?” Or “I’m playing here, can you come out on my show?” Whatever the case is, when it comes to me anyway and doing collaborations, I’ve always felt first and foremost I just want to be fans of the people I’m working with, and I’m a fan of Little Dragon, I’m a fan of Michael Kiwanuka, Cleo Sol, all these people, and because of that I think it’s important to have that relationship, because it shows on the record.

It’s kind of like when we’re on tour, everything that happens offstage is so important because it shows on stage. I think it’s the same with collaborations also, it’s important to have that kind of connection with people.

Tarik: Let’s talk about the the first song you performed for us, “Offence.” What is the  song about? And then talk about the video. It kind of reminded me of A Tribe Called Quest’s “Scenario” video. In the video, you featured young people of color and women in that video. What was the inspiration behind it?

Little Simz: Offense for me was a song that is super unapologetic… I felt sometimes because I’m a woman in my industry, I kind of have to just play that little lady role, and just do my thing on the side. This time around I came back and I was like, “No, I’m not doing that.” Because, why though? You know, I don’t have nothing I need to apologize for, I believe in myself, I believe in my talent, and I just wanted it to be a statement song, and I chose to open my album with that song, just to set a tone. And the video, the video for me, growing up I always watched early Missy Elliott videos, and she always had these kid dancers in it, and I just remember feeling like, “Oh, I wish I could be one of the kid dancers in her videos.” Got older, and kind of envisioned me kind of being the Missy of that finale, if that makes sense?

And dance is something I’ve done since I was young, so I thought it would be cool to incorporate that style into what I’m doing now, and just give kids an opportunity to be a part of something cool.

Tarik: Let’s talk about a little something serious. The song “Therapy” seems to be a very personal song. It seems like it deals with mental health, and emotional stress. In the song “Therapy “you talk about whether or not should you go to therapy or not. Was writing that song actually therapy for something you were really going through?

Little Simz: Yeah, for sure. This whole album was therapy for me in a sense, and I’m so blessed you know, because not everyone has an outlet that they can channel whatever they’re going through. Like some people go through things and then turn to substance abuse or whatever it is and I’m so blessed to have music as my outlet, and even when I was going through what I was going through, I kind of went into the studio with the mind-set of just venting. And through that process I think it was healing, just talking. You know what I mean?

It’s so simple, it’s such a simple concept, but sometimes it’s like the hardest thing to do, and like I said before, getting in with Inflow, he’s someone that just allowed me to not be afraid of the studio, and just kind of see the studio as almost like your bathroom. What you do in your bathroom is the most personal space, you know what I mean? It is though, isn’t it? Just don’t hold back in that sense and just kind of let go and feel free to cry, feel free to make mistakes, feel free to get angry, do whatever you need to do, because it’s all a process, and I come out of it and I’ve created something beautiful that allows me to travel the world and do all these things. It’s almost like I have to go for it, in order to get to Milwaukee.

Tarik: You have had some major artists give you praise. Kendrick Lamar basically said you’re one of the illest doing it right now. You went on tour with some artist named Lauryn Hill. What’s that like? Was it a motivator or was it just, “Oh this is just a daily thing.” Did it move you to work harder?

Little Simz: It’s definitely not a daily thing. It’s definitely not that. Yeah, I think what you said is just fire in my belly, as much as that stuff is great, it’s almost like, “Ah, now I’ve got all these eyes on me, so you better do something good.” But, yeah, it’s just fire in my belly and kind of motivates me into doing more and do better, and they’ve said my name for a reason, so do it then; get to it.

Tarik: Are you going to collaborate with Kendrick or Jay-Z soon?

Live from the Lab: A Session with Little Simz