Why Parcels’ music is so infectious and fresh, yet so familiar…

Why Parcels’ music is so infectious and fresh, yet so familiar… 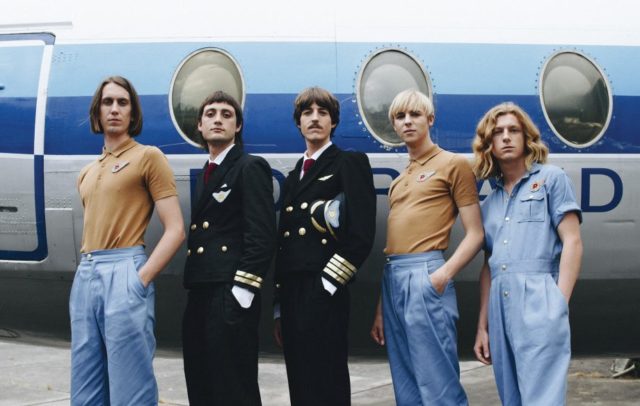 Everyone loves homework, right? Today’s assignment is to listen to the first 1:20 of the song “Comedown” from the five-piece surfer rock/disco/electropop band and Rhythm Lab Radio artist Parcels. It’s the opening track of the Australian born, Berlin based band’s self-titled debut LP released in 2018.

That first minute and twenty seconds perfectly encapsulates the group’s throwback style and sound of warm keys and frantic, funky chords. The latest album is stacked top to bottom with similar tracks that take the listener straight into the middle of the steamy dance floors of the 1970s. Ever so much more than a simple revival band, Parcels has a sound that is uniquely familiar and have caused music fans and industry insiders to take note.

Airy and introspective vocals, harmonized by up to all five members, are surrounded by tight drums and saturated synths that cause one’s shoulders to bounce with instinctive smoothness. The guitar is often used as an anchor for the songs, leaving the bass to glide with confidence across the soundscape of a neon lit roller rink on a hot summer night.

Deeper in the album, the tracks “Tieduprightnow” and “Lightenup” both have a bright, catchy sound that could slot into place anywhere on Daft Punk’s classic 2013 “Random Access Memories.” But I might have buried the lead here, because the similarities between this legendary duo and Parcels is anything but random.

Over the past 10 years, Daft Punk have produced/co-produced for a select few artists: Kanye West, N.E.R.D, Pharrell, The Weeknd, and—that’s right—Parcels. In 2016, Guy-Manuel de Homem-Christo and Thomas Bangalter watched from the back of a packed room as Parcels performed its first ever show in France. Immediately after, they invited the band to record a song with them.

Working for seven straight days, together they created the infectious single “Overnight” to worldwide acclaim. It’d be easy to think that Parcels are simply ripping off what the members learned from Daft Punk, but earlier works such as “Myenemy” or “Older” show that the band’s style was already much their own. Maybe that is why the band drew huge crowds at several festivals prior to the release of its debut LP. Unsurprisingly, Parcels’ current US tour is now selling out across the country.

The complete package (no pun intended), Parcels is as polished as a band can be after only a handful of singles and a debut release. The throwback ’70s sound is paired with tight crushed velvet pants, Steinhem-esque turtlenecks and era appropriate hair.

A cursory glance of the band might draw the criticism of “doing too much,” à la Greta Van Fleet. But Parcels is distinctly authentic. It’s that authenticity that makes the music so much fun. The LP’s closing track, “Credits,” can’t even escape the exuberant joy of the band as Dean Dawson reads off pseudo liner notes, in the style of Parcels’ favorite boy band BROCKHAMPTON in its hilarious track, “ENCINO.” Dean’s closing advice is to rewind the album and play it back from the top.