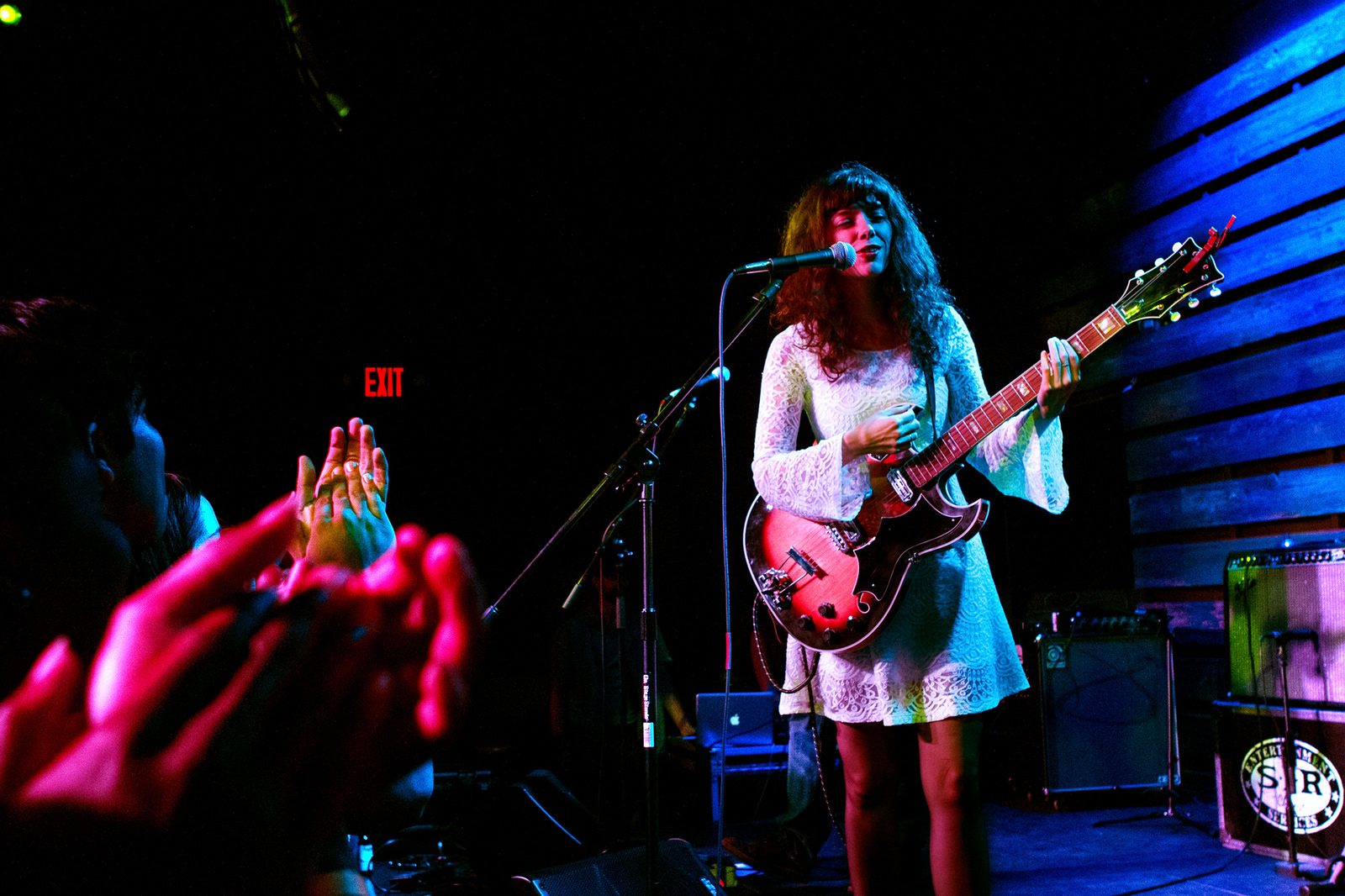 88Nine interns Edyn and Natalie were asked to review the Rhythm Lab Radio MicroFest, held July 24 at 88Nine’s studios. Here are their reviews.

If I could compare vibes to colors, MicroFest was gold

I’ve recently begun approaching life with zero expectations. So when I was assigned to attend and write about the 10 year anniversary celebration of Rhythm Lab Radio, I started the night with no idea of what to expect. I think it was the right approach.
When I strolled into 88Nine’s performance space, I looked at the mix of people there — young, old, preppy, hipster(y), black, brown and white.  And as I watched the day turn to night, and at all of these people smiling in the intimate venue, I felt fortunate to be there. It felt like I was at a private concert — a pretty fair description of the event.

There was no shortage of booze, music, dancing, or raving lights. If I could compare vibes to colors, the night was gold — ponyboy golden in fact. It was Tarik Moody’s event. He co-created Rhythm Lab Radio 10 years ago as a DJ in Minneapolis. He continues to produce the program weekly at 88Nine.

It was also Tarik’s birthday. At one point in the night, headliner Natalie Prass got the crowd to sing “Happy Birthday” to him. It gave me goose bumps. Tarik couldn’t wipe the grin from his face. And since Tarik is a major foodie (and writes a blog The Moody Cook), there were food trucks in the station parking lot. I’ll admit this was one expectation I allowed myself, and yes, Marco Pollo, Eats & Treats and Meat on the Street all lived up to it. They were delicious.

At another point in the night a classic dance circle formed and a dance-off went down while Taylor McFerrin absolutely owned the stage. But Peanut Butter Wolf really made the night for me. It’s pretty hard for a dude standing solo on stage, shielded by his computer and controls, to create a memorable performance. But this guy did. With YouTube videos projected on a screen behind him, and hilarious commentary between songs, I was hooked.

‘One of the best’

Jordan Lee, Radio Milwaukee’s new program director, said after Peanut Butter Wolf’s set, “I’ve seen a lot of DJ’s in my time, but this guy is by far one of the best.”

By the end of the night, when everyone had cleared out and the lights stopped shining, I was sad it was over. I’m hoping to not have to wait another 10 years for an event like this again. It was a success, and I was proud to have been part of it.

There’s something to be said about performers who smile

It adds a little extra something to the show. Watching an artist you admire having fun on stage makes you feel good. They’re enjoying your company just as much as you’re enjoying theirs.

That energy was contagious at Friday’s Rhythm Lab MicroFest at Radio Milwaukee.

A special night for TRUE Skool

The TRUE Skool Band kicked off the night — students performing original hip hop and R&B pieces with passion and intention. One of the night’s headliners, Peanut Butter Wolf, stuck around after his sound check and watched them perform.

Honestly, how cool is that? One of the biggest names in hip hop watching Milwaukee high school students do their thing (he even took a video or two). I’m not a performer, but I even got nervous just standing next to The PB Wolf. So what TRUE Skool did was nothing short of valiant.

The first thing I noticed about the All-star Milwaukee ensemble, consisting of Fred Boswell Jr., Klassik,  Tim Ricketts, and Terry Harris Jr. , was the energy on stage. Klassik said it best himself when he gave a shout-out to birthday boy and MicroFest organizer Tarik Moody and talked about Milwaukee pride. The “M”s on their matching hats, Mil/wau/kee Home shirts, and Milwaukee Brewing Co beverages all represented the collective swelling of hearts for our hometown.

The first headliner, Taylor McFerrin, called up the lead performer of TRUE Skool and a guest in the audience, Siren, a rising vocalist in the Milwaukee music scene. Having an established artist like McFerrin embrace the Milwaukeeans was sweet and further created an atmosphere of camaraderie.

Natalie Prass had never performed in Milwaukee, although she looks like a native who you could spot sipping tea at Rochambo on Brady St. Natalie’s set list was full of surprises. At first, she and her band would lull you into something with a little soul and funk, then immediately make you want dance like Jennifer Beals from “Flashdance.” At one point, an audience member shouted that Prass had just transported him through space-time.

Activity didn’t stop between performances on stage. The DJs recruited for the night’s intermissions kept the crowd dancing (including me). And if you needed a reprieve from the insanity that filled 88Nine’s performance space, you found it in the parking lot — where Milwaukee’s finest food trucks were stationed.

Artists mingled with attendees over curry chicken and gourmet burgers, and when the time came to close up shop, many of the food truck workers came inside to enjoy the rest of the party.

My feet hurt from dancing and my cheeks hurt from laughing — two problems that arise from having a great night. And that was Rhythm Lab MicroFest.